Warning: None of the participants in the Great Air Conditioner Debate Of 2022 have endorsed my summaries of their positions in this post. Including me.

To my surprise, multiple commenters disagreed with my interpretation of the air conditioner example. They argue that in fact one-hose air conditioners work fine. Sure, single-hose air conditioners are less-than-ideally efficient compared to two-hose, but it’s not a very big difference in practice. CEER efficiency ratings account for the problems, and the efficiency difference is typically only about 20-30%. Also, The Wirecutter tested lots of portable air conditioners and found that there wasn’t much difference between one-hose and two-hose designs. (Credit to Paul for both those pieces of evidence.) Really, what this example illustrates is that simple models and clever arguments are not actually very reliable at predicting how things work in practice. One should instead put more trust in experiment and reported experiences, including all those 5-star ratings on Amazon.

I, on the other hand, think the “second hose doesn’t help much” claim is a load of baloney. I think it is far more probable that CEER ratings are bullshit and The Wirecutter messed up their test, than that a second hose makes only a small difference.

And so began The Great Air Conditioner Debate Of 2022.

… Why Do Air Conditioners Need Hoses?

Ideally, an air conditioner should work much like a fridge: it pumps heat from air inside to air outside. Inside and outside air do not touch or mix; only heat flows from one to the other. 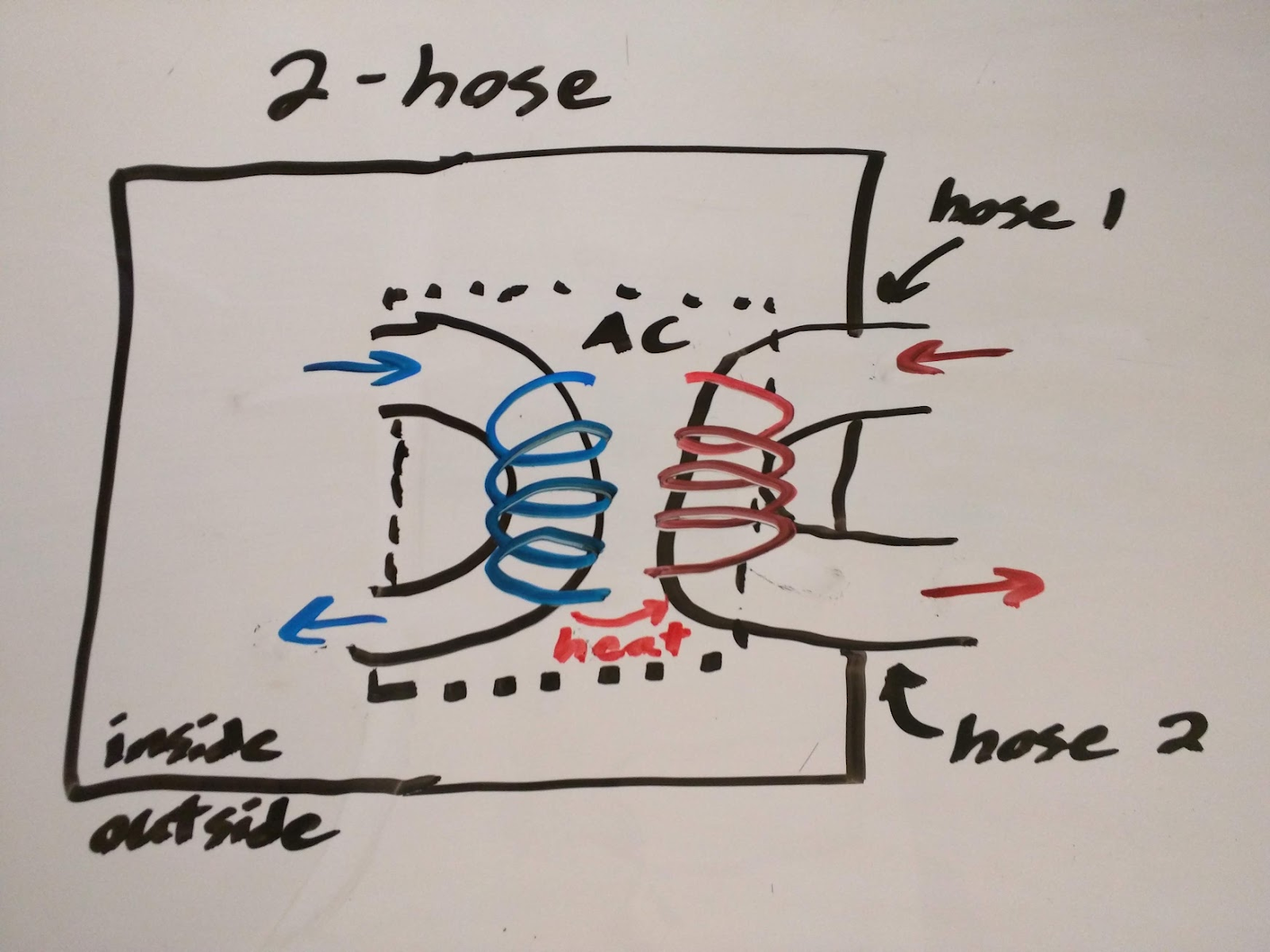 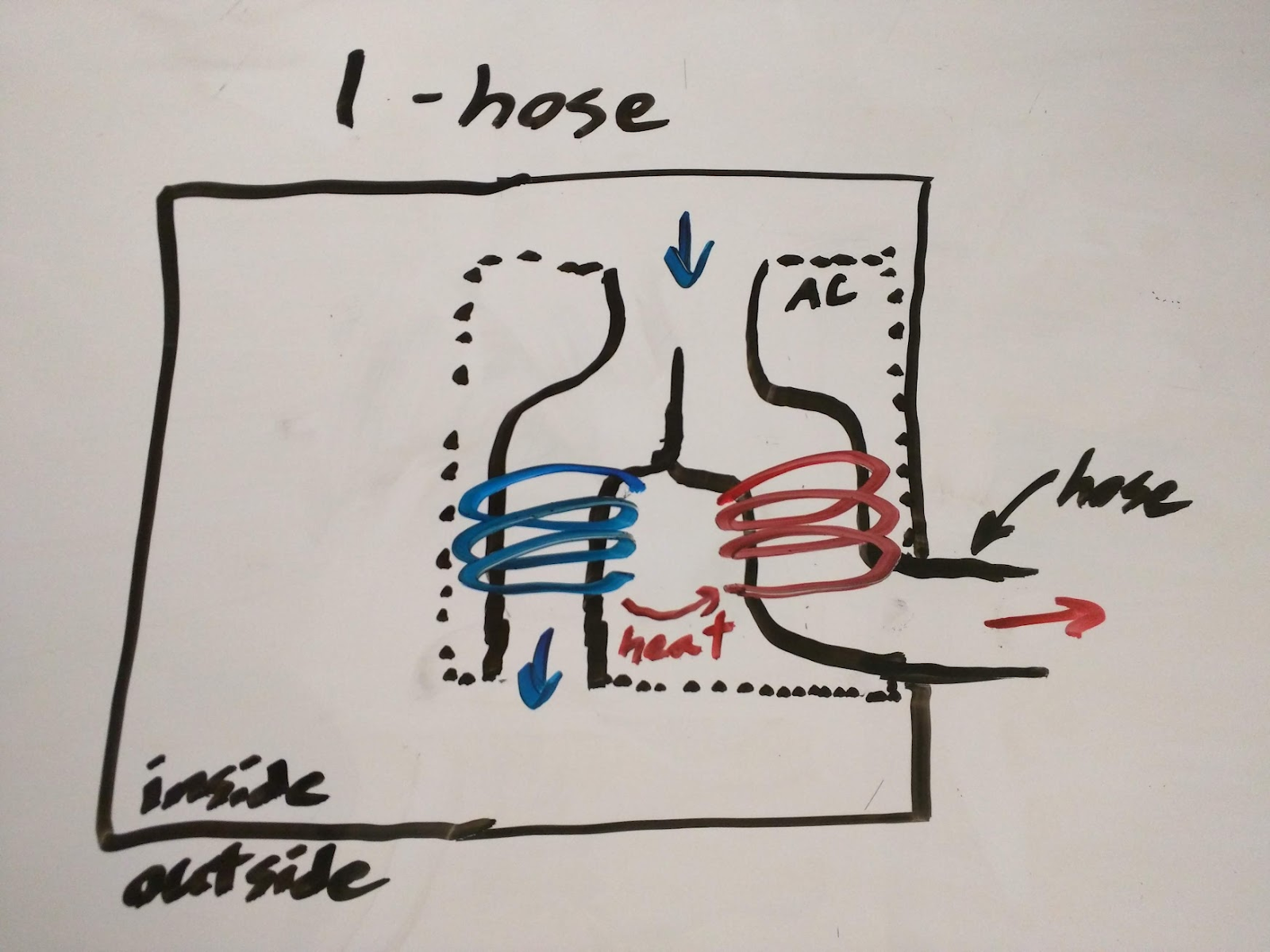 The problem with a single-hose design is that it blows air from inside to outside; it removes air from the room. That lowers the pressure in the room slightly, so new air is pulled back in via whatever openings the house has. That air comes from outside, so presumably it’s warm—and it’s replacing formerly-cool indoor air. (Technical term for this problem: “infiltration”.) 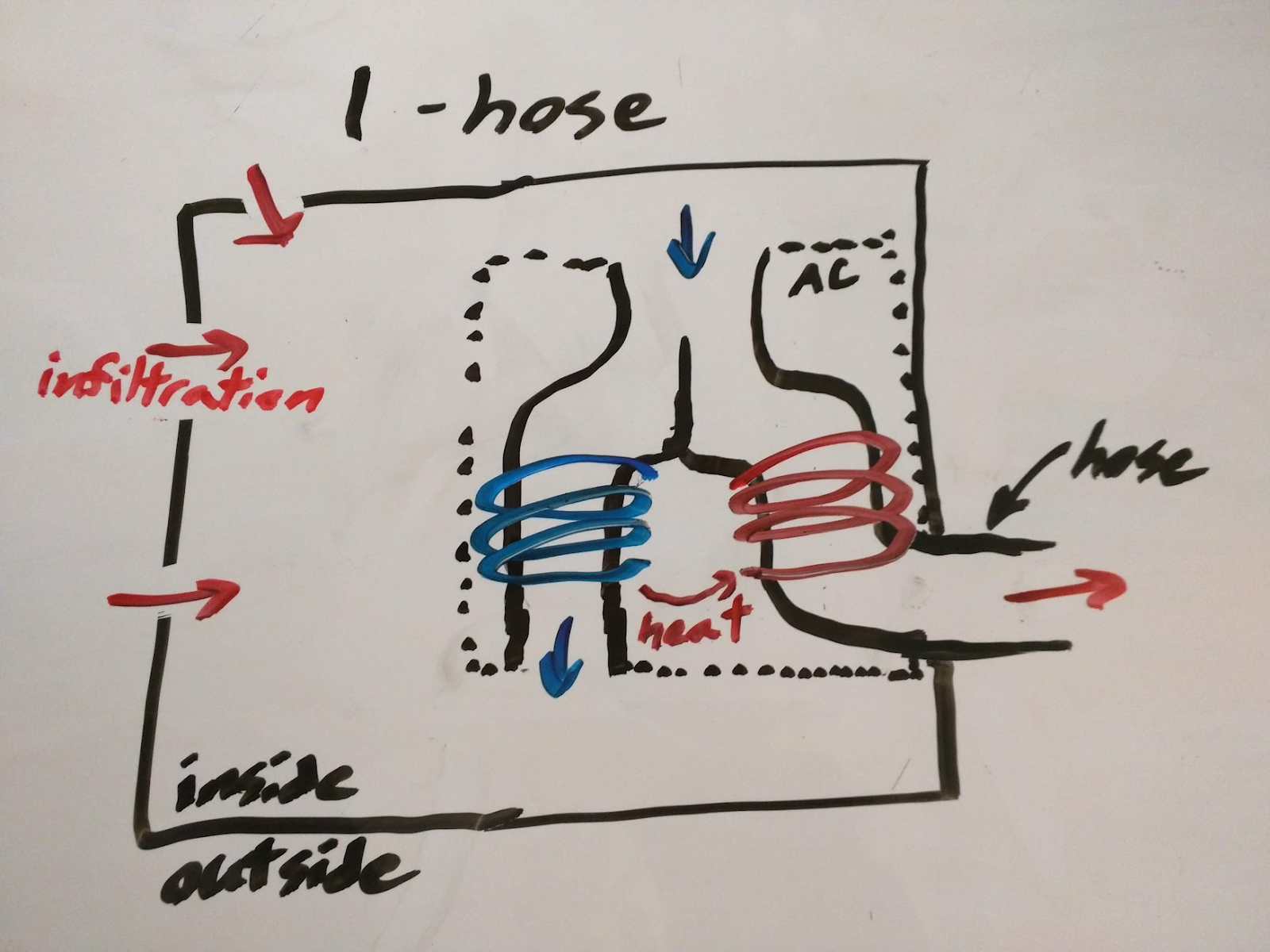 Oversimplified Summary Of The Debate

I’m not even going to try to do justice here, just give what I currently think are the key points, in roughly chronological order:

That last link includes some other important information too: one estimate that 20-30% lower CEER ratings imply one-hose air conditioners have roughly 0% efficiency under a 15°F/​8.3°C temperature delta, as well as some quotes from discussion on the Department of Energy’s CEER rulemaking process suggesting that air conditioner manufacturers themselves thought single-hose units might not be viable in the marketplace at all if infiltration were fully included in ratings.

Paul and I each suggested a quantitative toy model during the discussion as well. Those models are in the appendix, for those interested.

Why Is This Interesting?

One thing to keep in mind throughout all of this: the actual claim of interest is that single-hose air conditioners are

stupidly inefficient in a way which I do not think consumers would plausibly choose over the relatively-low cost of a second hose if they recognized the problems.

Why are alignment researchers debating this claim?

There’s a general model/​worldview that the world is filled with problems which are not fixed because most people do not notice them. (This is a particular form of “civilizational inadequacy”.) This includes problems which are bad enough that people would have a strong preference to fix the problem if they did notice it; we’re not just talking about small problems here. That worldview informs AI strategy: if we expect that ultimately-fatal problems with AI will not be fixed because most people do not notice them, then we’re generally more pessimistic about things working out all right “by default” and more reliant on doing things ourselves. Also, it means that we ourselves could easily miss the key problems, so we need to invest heavily in deep understanding, and in the kinds of models which tell us which questions to ask, and in techniques for noticing when our models are missing key pieces.

On the other hand, if we expect that major problems are usually noticed and fixed “by default”, and that AI will also work this way, that suggests very different strategies. We can rely more on marginal progress, making problems marginally more visible, helping existing institutions deal with problems marginally better, etc. We also don’t have to worry as much that we ourselves will miss the key problems for lack of understanding.

In general, alignment has terrible feedback loops: we can’t just build an AGI and test it. In this case, we can’t just have a team build an AGI and see whether any problems come up which the team missed. So if we want to test these two models/​worldviews, then we need to get our bits from somewhere else. Fortunately, the real world is absolutely packed with bits of evidence; these worldviews make predictions in lots of different places, so there’s lots of opportunities to compare them.

In this case, the air conditioner example was cherry-picked, so even if my claims turn out to be correct it’s not very strong evidence for the civilizational inadequacy worldview in general. But if even my cherry-picked example is wrong, then that is a nontrivial chunk of evidence against the inadequacy worldview. I myself was almost convinced at one point during the debate, and started to think about how I’d have to adjust my priors on AI strategy in general (mostly it would have meant spending more effort researching questions which I had previously considered settled or irrelevant).

Also, we can update on the kinds of evidence and reasoning on display during the debate. For instance, many people took CEER ratings as strong evidence. If those indeed turn out to be bullshit, then it should produce a correspondingly strong update against trusting that kind of evidence in the future. Same with The Wirecutter’s tests.

I myself bought this single-hose portable air conditioner back in 2019 (for an apartment in Mountain View). My plan is to rig up a cardboard “second hose” for it, and try it out in my apartment both with and without the second hose next time we have a decently-hot day. 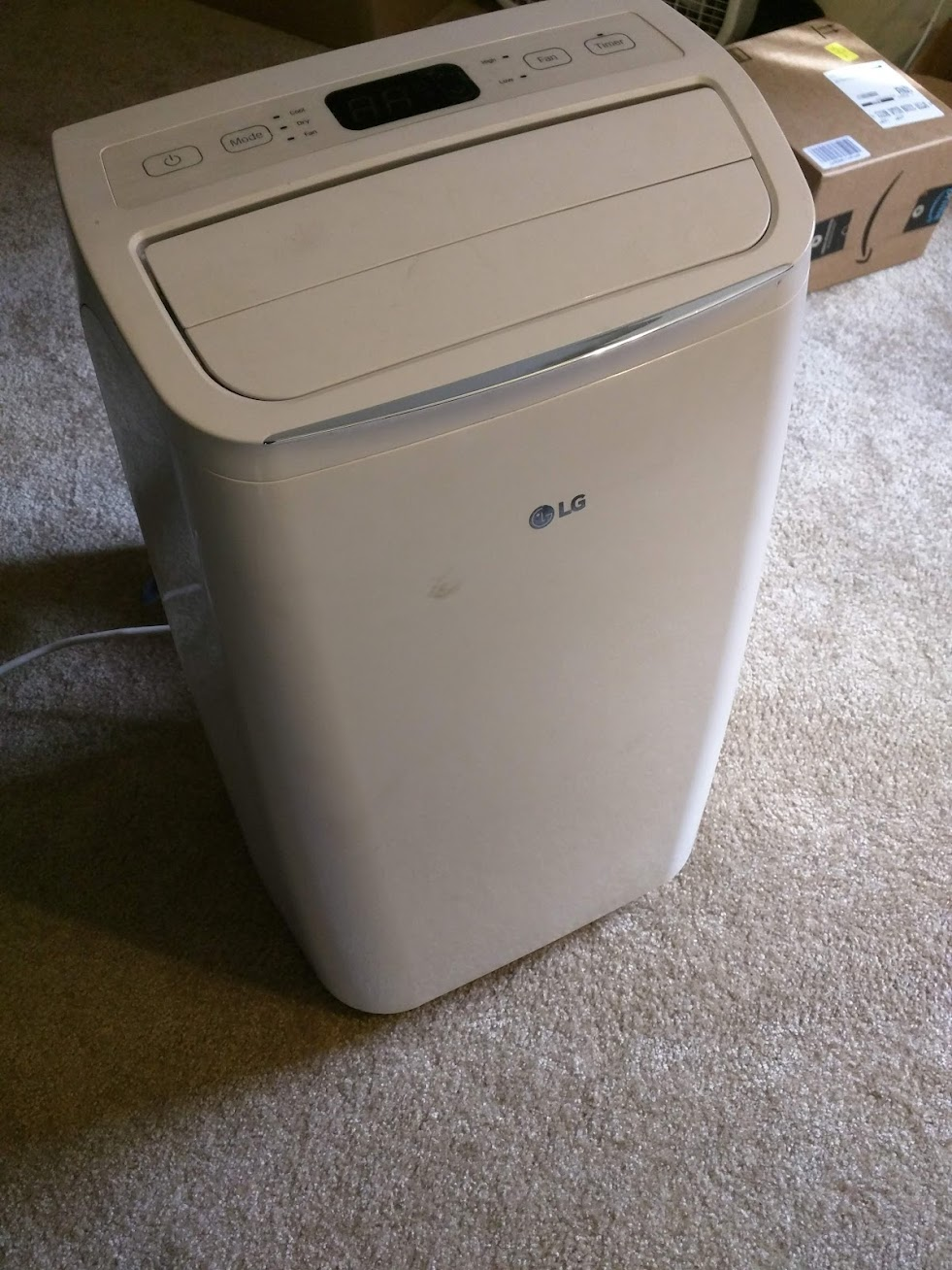 If there are other particulars of the experiment which people think will be relevant, leave a comment and I’ll declare how I plan to control the variables in question.

Paul disagrees with this, and expects the two-hose temperature delta to be more like 20% greater than the one-hose delta (roughly proportional to the efficiency difference he expects). [EDIT: Paul clarified that he expects a 25-30% efficiency difference, which he expects to translate into a 33-43% difference in temperature delta. He also listed a few conditions under which that prediction would change. 33-43% is pretty close to my 50% cutoff, though my median expectation is much bigger, so we do still have a substantive disagreement to test.]

There’s a Manifold prediction market for the experiment here. If you want everyone to see your probability on LessWrong, you can also use this prediction widget:

If anybody wants to make real-money bets, feel free to use the comment section on this post.

In the course of the discussion, two simple models came up.

Note that the 1:1 flow rate assumption does a lot of work here, but I think it’s on the right order of magnitude based on seeing my single-hose air conditioner in action; if anything the exhaust blows more. The constant cold-temperature is more suspect.

Paul instead talked about efficiency, and claimed that

I’m not sure how that formula was derived, but here’s my best guess. [EDIT: Paul summarizes his actual argument in this comment, and it makes much more sense than my guess below. Leaving the guess here for legibility, but it’s definitely not the calculation Paul did.]

In general, for an efficient air conditioner, the “efficiency” is WQ=TH−TCTC, where:

For the two-hose setup, there’s no downside to blowing lots and lots of outdoor air through the system, so the “hot” side of the heat pump can be kept at outdoor temperature. So, W2Q = (outside temp—inside temp)/​(inside temp). But in the one-hose setup, the exhaust flow rate needs to be kept low to minimize infiltration losses, resulting in a higher exhaust temp. So, W1Q = (exhaust temp—inside temp)/​(inside temp). Combine those two, and we get the ratio of work required to pump the same amount of heat in one-hose vs two-hose mode:

… but that’s not a formula for efficiency lost. That formula is saying that two-hose takes only 20% as much energy as single-hose to pump the same amount of heat. The efficiency loss would be one minus that, i.e. around 80%. So my current best guess is that Paul found this formula, but accidentally used one minus efficiency loss rather than efficiency loss, and it just happened to match the 20-30% number he expected so he didn’t notice the error.

How realistic are the assumptions for this model? I think the two main problems are:

These two issues would push the error in opposite directions, though, so it’s not clear whether the 80% efficiency loss estimate is too high or too low.