Why did Europe conquer the world?

For most of history, China was the center of civilization. It had the biggest cities, the most complex government, the highest quality manufacturing, the most industrial capacity, the most advanced technology, the best historical records and the largest armies. It dominated East Asia at the center of an elaborate tribute system for a thousand years.

Western Europe was a backwater’s backwater. It had few cities. Most people lived on the countryside. Technology regressed after the fall of the Western Roman Empire.

And yet, in recent centuries, it was Western Europe (along with Russia and the USA) that conquered the world. When a Chinese exporter sells lead-acid batteries to an Argentinian importer they wear European clothes, speak English and settle accounts in USD.

In Guns, Germs, and Steel, Jared Diamond divides the human-occupied world into four regions: Eurasia (including Mediterranean North Africa), Subsaharan Africa, America and Australia. One of these is not like the others. Eurasia is the biggest and had access to the most domestic animal species. Large interconnected trade networks of people evolve diseases faster, develop technology faster and can support more complex economies.

In Africa, the disease situation was almost reversed. Africans are resistant to European diseases but Europeans are susceptible to African diseases. Europeans’ better technology and organization defeated Africans on the battlefield but it wasn’t until after the large-scale manufacture of quinine beginning around 1850 that the scramble for Africa really took off.

Jared Diamond makes a persuasive case for why Eurasian (including Mediterranean North Africa) people dominated the peoples of America, Subsaharan Africa and Australia. But why Europe? Why not China or India or the Muslim Empires? Why did Europe dominate Asia?

The Opium Wars were a conflict between the United Kingdom [of Europe] and the Qing Dynasty [of China]. Britain didn’t just win. Britain swiftly crushed China. Britain dominated for two reasons: one technical, the other political.

But the Industrial Revolution is only half of the story. China goes through dynastic cycles of unification and dissolution. At the height of a dynasty’s power, the ruling dynasty is able to field enormous resources. At the depths of a warring states period, Chinese states are toughened by the pressures of war. If an outside power wants to conquer China, the best time to do so is while a dynasty is crumbling.

Britain started the Opium Wars right after the China had just finished fighting both sides of multiple civil wars including the Taiping Rebellion and the Dungan Revolt. The Dungan Revolt is among the ten biggest wars in human history. The Taiping Rebellion was (at the time) the biggest war in human history. It was surpassed only by World War II. The financially-exhausted Qing Dynasty was barely holding on to power.

India was the crown jewel of the British Empire. Europeans didn’t just land in India and immediately conquer it the way they destroyed Mesoamerica. It took centuries. The Portuguese had been establishing trade ports in the Indian Ocean for a hundred years before the British even arrived.

The Dutch, Portuguese and French avoided trading in India because the Mughal Empire was so powerful it could set the terms of trade. Capitalism comes from the barrel of a gun. The Dutch East India Company had 150 merchant ships, 40 warships and 10,000 soldiers but even that wasn’t enough to overpower the Mughal Empire. The Dutch East India Company concentrated on the Indonesian spice trade instead of the literal Indian spice trade because the small kingdoms of Indonesia were weaker than the Mughal Empire of India. Britain set up trade ports in India because it was the only spice-producing region in the Indian Ocean where the trade terms were so bad that the other European powers didn’t care enough to fight the British for the right to operate there.

It wasn’t until later, when the Industrial Revolution had progressed in Britain and the Mughal Empire was falling apart that the British Empire began taking control of India.

Why did the Industrial Revolution happen in Europe?

Heavy industry was not distributed evenly throughout the British Empire. Manufacturing was concentrated in England. Mercantilist trade policy compelled the British colonies to send raw materials to the British Isles where they would be turned into manufactured goods to be sold to the colonies. Heavy industry were built in London at the expense of development in the colonies. The United States’ manufacturing exploded after the American revolution. India was plagued by famine after famine while the United States turned itself into a global superpower.

Here is a snapshot of the world in 1700, right before the Industrial Revolution. 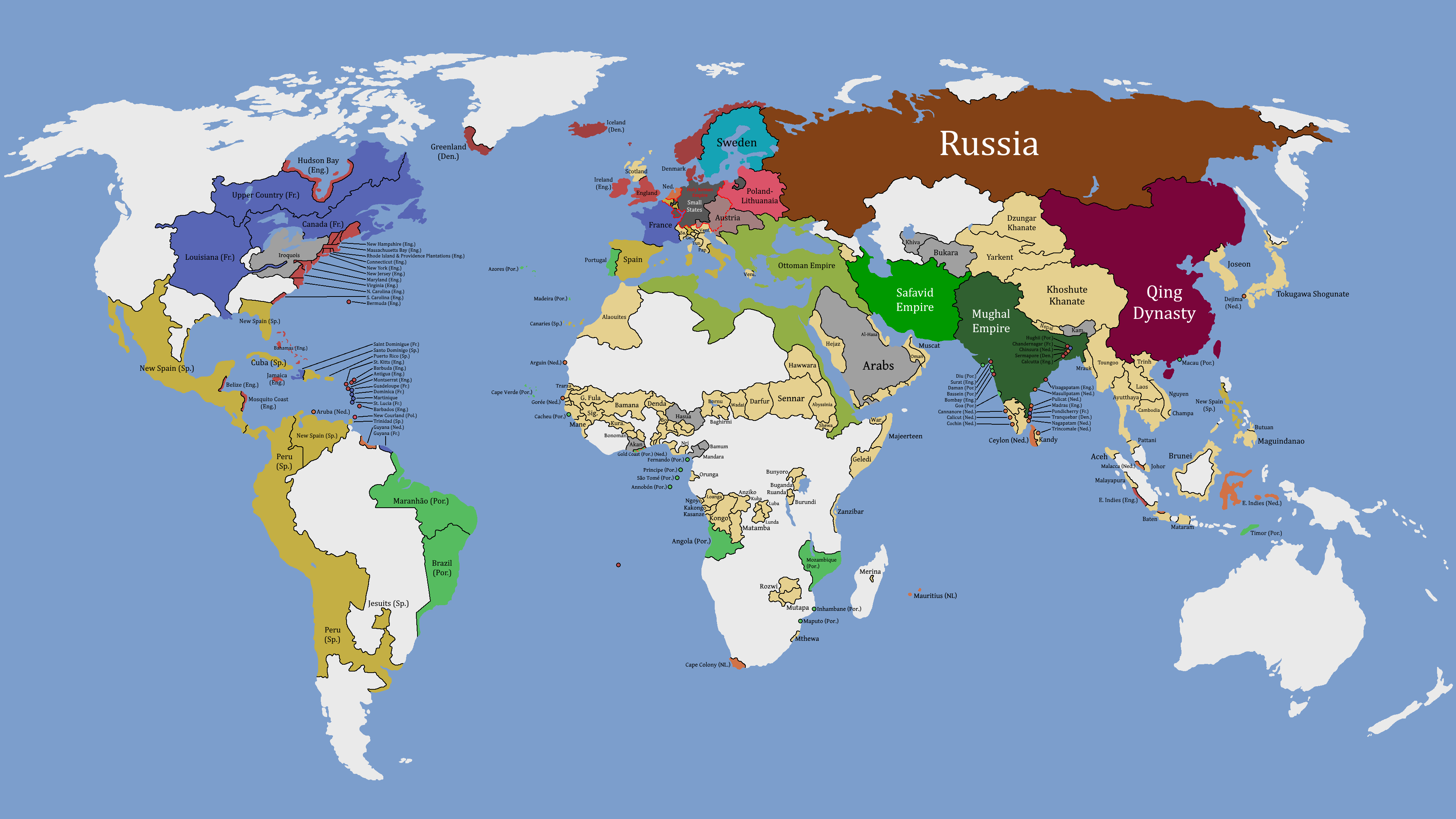 The Asian empires are contiguous. The European empires are discontiguous. Think about the economic pressures that promote mechanization. Optimal conditions combine tremendous wealth with a labor shortage. In ancient China, technology was used to harness excess human labor. Paul Polak built a poverty-alleviation program out of harnessing cheap labor in modern India. You’re not going to invest in primitive steam engines when human labor is cheaper than coal.

When a country gets rich, peasants walk to the big cities. But that that doesn’t work when the big city is separated from the countryside by a thousand miles of ocean. European technology (except long-range ships) wasn’t overpoweringly better (yet) than the Asian empires’ in 1700. European hegemony was caused by the Industrial Revolution was caused by high labor value relative to material costs was caused by discontiguous empires was caused by long-range trade.

Why was it Europeans who developed long-range cargo ships?

My Scottish relatives are fond of this joke: Why did the English conquer the world? Because there is nothing of value in the British Isles.

Picture the trade networks in 1485 from the perspective of a Portuguese merchant. Tea, spices and manufactured goods all come from the opposite end of Eurasia. The Mamaluke Sultunate controls Egypt. The Suez Canal has not been dug yet. If you lived in Western Europe and you wanted Indian trade goods you had to sail across the Mediterranean, get off your ship, pay the Mamalukes’ toll, cross Egypt on foot, get on a new ship, sail to India and then reverse the entire process (including paying the Mamalukes’ toll a second time).

Overland trade is expensive, especially when it all goes through a single choke point controlled by greedy infidels. Europe was desperate for an alternative trade route to Asia. Portuguese explorer Bartolomeu Dias made the dangerous journey around the Cape of Good Hope in 1486, connecting Europe to Asia via water.

Why didn’t the Mamaluke Sultunate do this? Because they didn’t need to. They controlled the Sinai peninsula. Muslims weren’t about to sail in a full circle around the entire continent of Africa just to avoid interacting with themselves.

Why didn’t India and China experiment with long trading voyages? China did. The Portuguese weren’t the only 15th century oceanic explorers. The Ming Dynasty built the greatest fleet the world had ever seen and sent it west in seven voyages of exploration. They made it all the way to Arabia and Africa. Despite conquering Ceylon, the Ming treasure fleet discovered nothing of sufficient value to justify its expense. The Chinese wrote the expeditions off as a loss and returned home. India and China didn’t need to sail halfway around the world to get trade access to Indian spices and Chinese porcelain.

They didn’t need to conquer either. China plus India encompassed between one third and one half of the world’s population. Overseas expansion would be an unprofitable logistics nightmare. The Delhi Sultunate was not about to send a trade voyage to Scotland just to obtain a bit of wool. All they wanted from Europe was silver and gold. They could obtain that just fine sitting at home in their trade ports. Let the Europeans come to them.

Shortly after Bartolomeu Dias succeeded in connecting Europe to Asia via water, a Spanish explored named Christopher Columbus used the power of European science to calculate that it would be shorter to travel west from Europe to India than to travel east around Africa as Bartolomeu Dias did.

Columbus used the Arab astronomer Al-Farghani’s estimate that each degree of longitude spanned 45⅔ miles. Al-Farghani was correct. However, Columbus didn’t realize that Arabic miles are shorter than Roman miles. Columbus therefore underestimated the circumference of the Earth by 25%.

Put all of this mistakes together and Columbus underestimated the distance from Europe to Asia by between 2× and 5.4×. He should have died because no 15th century ship could travel the actual distance westward from Europe to Asia. European overseas expansion was kicked off when he landed in America by accident, believing (possibly to his dying day) that he had reached India.

The discontiguous European overseas empires started with Christopher Columbus. Europeans conquered the world because their technology was so awful that everything of value was located somewhere else and because one specific European was bad at science that several of his misassumptions and miscalculations happened to perfectly cancel out by sheer luck.