Continuing my interest in tracking real-world predictions, I notice that the recent acquittal of Knox & Sollecito offers an interesting opportunity—specifically, many LessWrongers gave probabilities for guilt back in 2009 in komponisto’s 2 articles:

Both were interesting exercises, and it’s time to do a followup. Specifically, there are at least 3 new pieces of evidence to consider:

Point 2 particularly struck me (the press attributes much of the acquittal to the expert report, an acquittal I had not expected to succeed), but other people may find the other 2 points or unmentioned news more weighty.

I was curious how the consensus has changed, and so, in some spare time, I summoned all the Conscientiousness I could and compiled the following list of 54 entries based on those 2 articles’ comments (sometimes inferring specific probabilities and possibly missing probabilities given in hidden subthreads), where people listed probabilities for Knox’s guilt, Sollecito’s guilt, and Guede’s guilt:

It’s interesting how many people assign a high-probability to Knox being guilty; I had remembered LW as being a hive of Amanda fans, but either I’m succumbing to hindsight bias or people updated significantly after those articles. (For example, Eliezer says .15 is too high, but doesn’t seem otherwise especially convinced; and later one reads in Methods of Rationality that “[Hagrid] is the most blatantly innocent bystander to be convicted by the magical British legal system since Grindelwald’s Confunding of Neville Chamberlain was pinned on Amanda Knox.”) 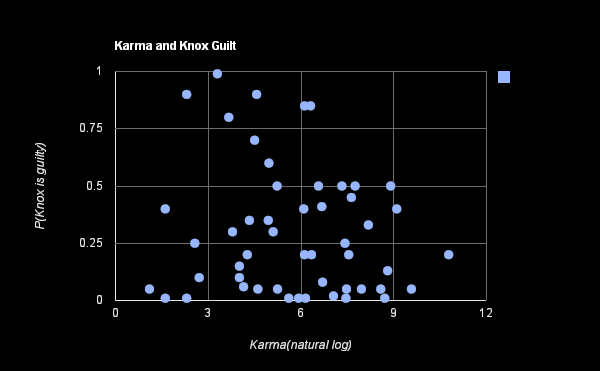 I have messaged each of them, asking them to comment here, describing if and how they have since updated, and any other thoughts they might have. (I have also messaged the first 12 commenters or so, chronologically, with <41% confidence in Knox’s guilt, with the same message.) The commenters:

Allknowing and most merciful Bayes;
We have erred, and strayed from thy ways like biased sheep.
We have followed too much the devices and desires of our own hearts.
We have offended against thy axiomatic laws.
We have left undone those updates which we ought to have done;
And we have done those updates which we ought not to have done;
And there is no calibration in us.
But thou, O Bayes, have mercy upon us, miserable wannabes.
Spare thou them, O Bayes, who confess their faults.