Gene drives: why the wait?

(Crossposted from my Substack)

If you’ve been following biology news over the last few years, you might have heard of an interesting concept called a “gene drive”. The overall idea is to engineer a genetic allele that transmits itself to all offspring of a sexually reproducing organism, instead of being inherited by 50% as usual. This allele can also perform some other biological function (a relevant example is causing female sterility).

A gene drive spreads through a population. From Esvelt et al. 2014 (CC-BY)

In multiple trials, modern CRISPR-based gene drives have shown high efficacy in spreading through populations of caged Anopheles mosquitoes and completely suppressing their reproduction. Since Anopheles mosquitoes are the only ones that transmit malaria, causing their extinction would directly save hundreds of thousands of lives per year. Similar gene drives targeted to other types of mosquitoes (Aedes, Culex, etc.) could also eliminate diseases such as dengue fever, Zika virus, and West Nile virus.

However, in spite of promising laboratory trials, gene drives have not yet been deployed in the wild. But why not?

Although the technology to build effective gene drives did not exist until recently, the idea has been around for a while. In fact, gene drives occur naturally. Some well-known examples are transposons in flies, homing endonucleases in algae, and segregation distorters in mice.

The idea of engineering a site-specific nuclease as a gene drive was developed as early as 2003, and in the decade that followed there were several efforts to develop these, with the labs of Austin Burt and Andrea Crisanti taking a lead role. These early systems showed some biased inheritance, but were not stable for more than a few generations.

The advent of CRISPR as a gene editing system opened up a new opportunity. A paper in 2014 by Kevin Esvelt and co-workers proposed Cas9 as a nuclease for a gene drive, with several properties making it ideal for the task. 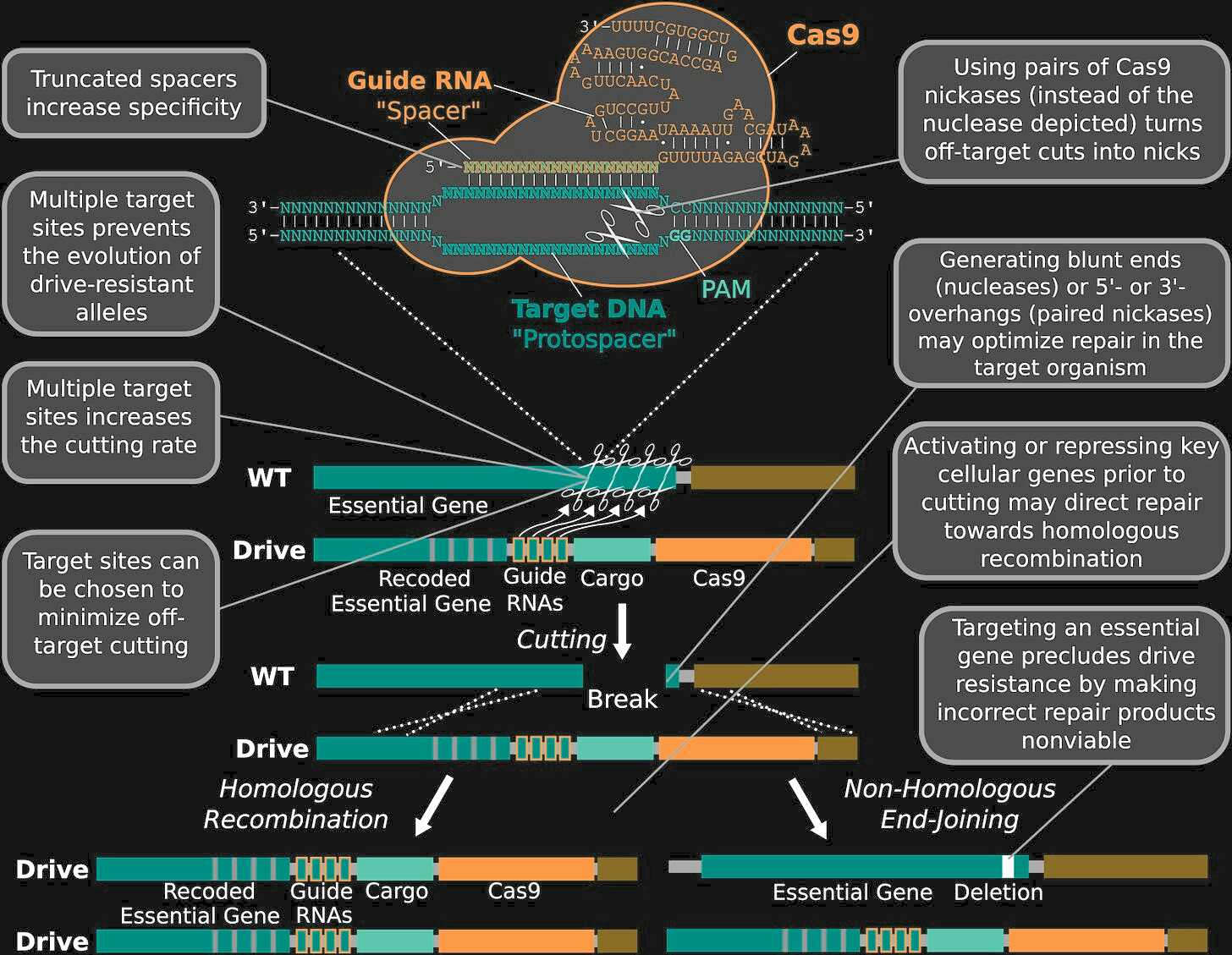 CRISPR-based gene drives quickly gained popularity in the field, and by 2018 the Crisanti lab had demonstrated a working gene drive that could efficiently suppress populations of Anopheles gambiae by targeting an exon of the doublesex gene required for female development. At the time this was announced, I was studying at the University of Cambridge, and attended a public lecture by Prof. Crisanti about his lab’s work. The overall mood in the room was almost euphoric: here was a technology that could save millions of lives, the best thing since Borlaug’s wheat!

Since that lecture, about 2 million people, mostly children in Africa, have died of malaria. Gene drive research has not stood still: the Crisanti lab tested their doublesex drive in larger cages of mosquitoes, and it again completely eliminated the populations. But given the millions of lives at stake, what’s taking so long for this gene drive to be released?[1] 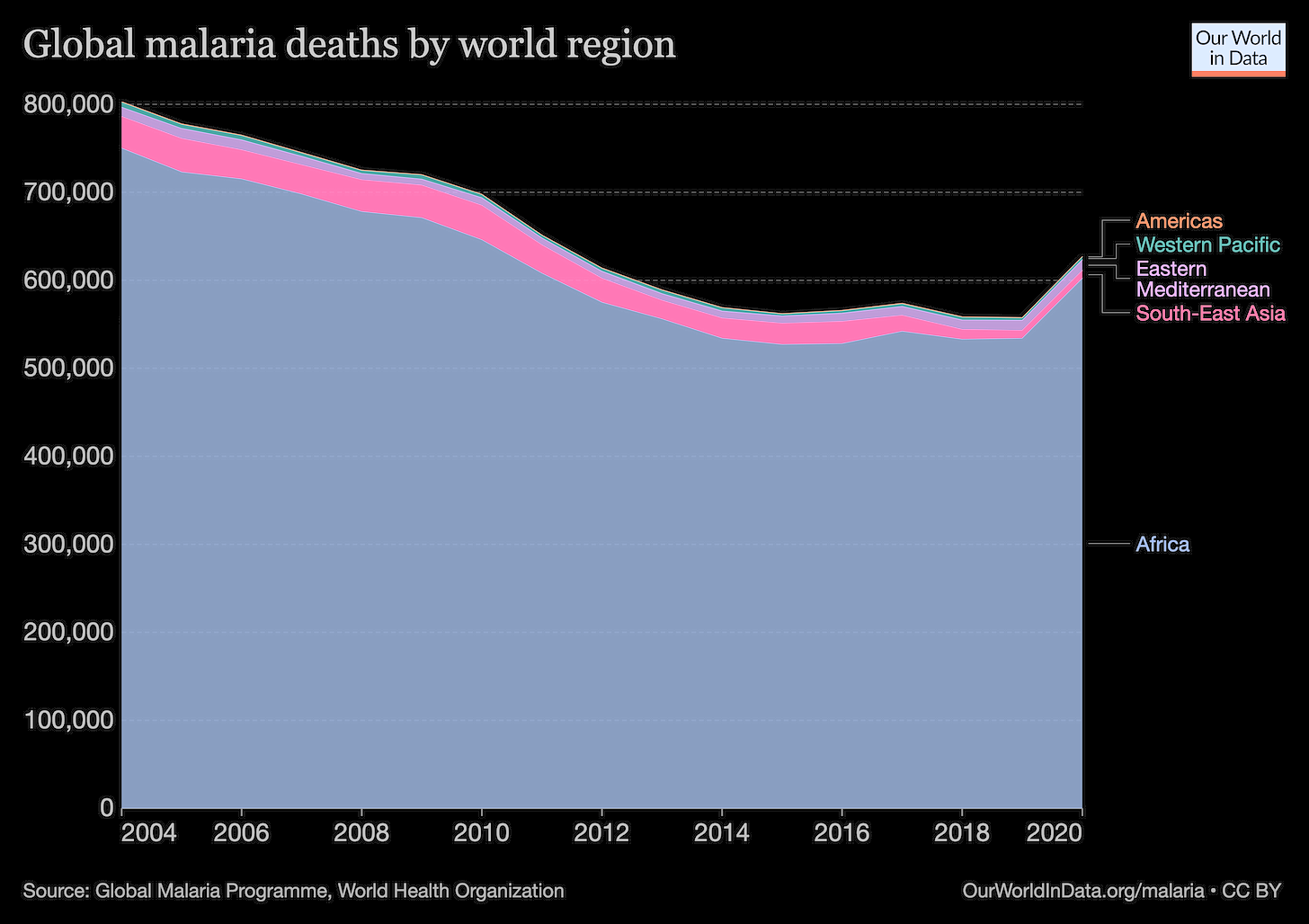 See also: the battle against malaria in Africa has stalled

There are two good arguments[2] against the immediate release of gene drives to eliminate mosquitoes.

First, nuclease gene drives have the possibility of generating resistant alleles, making future gene drives not work against the same target. Therefore, it’s important to get it right the first time, otherwise the potential of gene drives could be wasted. The goal of the large cage trials I mentioned earlier is to confirm that the doublesex-targeting gene drive is effective and does not cause resistance. Still, I think there are enough potential target sites in the mosquito genome that accidentally causing resistance at one of them would be only a moderate setback.

Second, in addition to resistance in the mosquitoes, we must also consider resistance by humans. Even if it benefited people in the short term, releasing a gene drive without consulting the local government would likely lead to a huge backlash, be perceived as “paternalistic colonialism”, and bring about massive restrictions on the development and use of other gene drives. It takes time to build community consensus, and although we should try to shorten this time, bypassing it entirely would be unwise.

But do these concerns really outweigh the roughly 1600 deaths, and many more cases of illness, that take place from malaria each day? I am honestly not sure. If I were Prof. Crisanti, I would be very tempted to release the mosquitoes.

For now, since renaming things is so popular these days, let’s change Anopheles gambiae to Anopheles delendae.