Last month, mobile gaming superstar Angry Birds was out-sold in some countries by DragonBox, a kids game in which players solve alegbra equations.

How does the game work? Jonathan Liu explains:

There are five “worlds,” each with twenty levels, and as you progress through the levels the “dragons” hatch and grow into their full-sized versions. While this in itself has nothing to do with algebra, I mention this because my kids love this. It’s a very tiny incentive (along with earning stars) but they really want to beat the next level to watch the dragon grow into its next form. I was told that the dragons were all drawn by a fourteen-year-old girl, and they’re a lot of fun. (They aren’t all typical dragons — One starts off more like a fish, one looks like a squid, and so on.)

You are presented with a big screen with two trays, each containing a number of “cards” with different images on it. Somewhere on the screen there will be a little box with a star on it, sparkling and glowing. The app gives very minimal instructions in a hand-written font with arrows pointing to relevant spots on the screen, but it tells you to get the box by itself. At first you do this simply by tapping the green spirally cards, which vanish when you tap them. Then, you’ll start to get some “night” versions of cards — drag these onto the “day” versions and they become green swirls, which you already know how to handle.

After you’ve gotten past several levels of moving cards around and tapping on swirls, you’ll get a few cards down at the bottom which you can drag onto the trays — but whenever you drag a card onto one side, you have to also drag a copy to the other side as well. (This, of course, simulates adding the same number to both sides.) And then, a few levels on, you learn that you can flip these extra cards from day to night (and vice versa) before dragging them onto the trays.

As the game progresses, you’ll start seeing cards that are above and below each other, with a bar in the middle — and you’ll learn to cancel these out by dragging one onto the other, which then turns into a one-dot. And you’ll learn that a one-dot vanishes when you drag it onto a card it’s attached to (with a little grey dot between them). These, of course, are fractions — multiplication and division — but you don’t need to know that to play the game, either. 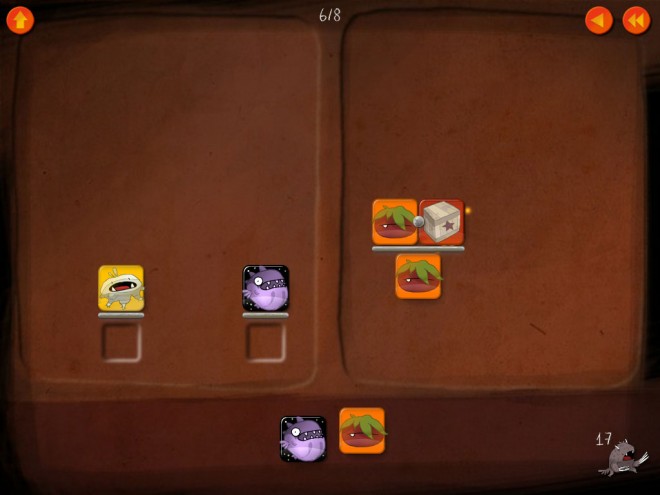 The key to DragonBox’s success is not that it’s the best algebra tutorial available, but rather that it’s actually fun for its target audience to play.

Others have noticed the potential of “computer-assisted education” before. Aubrey Daniels writes:

When you analyze [video games], you will see that the player is clear about what is expected of him, that [the] player’s behavior is continually measured, and [that] the player is provided with feedback so he knows what the measurements reveal about his performance. Finally, and most importantly, as he plays the game, the player receives high rates of reinforcement which motivate him to play the game over and over again. In fact, reinforcement occurs up to 100 times a minute.

Remember what works in reinforcement: Small reinforcements are fine, but the reinforcer should immediately follow the target behavior, and it should be conditional on the specific behavior you want to strengthen.

DragonBox is just a particularly successful implementation of this insight.

One of the goals for the Center for Applied Rationality is to develop rationality games and apps. But it’s tricky to think of how to make addictive games that actually teach rationality skills. So I’d like to provide a place for people to brainstorm ideas about what would make an addictive and instructive rationality game.