In 2009 I first described here on LessWrong a tool that Bethany Soule and I made to force ourselves to do things that otherwise fell victim to akrasia (“How a pathological procrastinator can lose weight”). We got an outpouring of encouragement and enthusiasm from the LessWrong community, which helped inspire us to quit our day jobs and turn this into a real startup: Beeminder (the me-binder!).

We’ve added everyone who got on the waitlist with invite code LESSWRONG and we’re getting close to public launch so I wanted to invite any other LessWrong folks to get a beta account first: http://​​beeminder.com/​​secretsignup (no wait this time!)

(UPDATE: Beeminder is open to the public.)

It’s definitely not for everyone since a big part of it is commitment contracts. But if you like the concept of stickK.com (forcing yourself to reach a goal via a monetary commitment contract) then we think you’ll adore Beeminder.

StickK is just about the contracts—Beeminder links it to your data. That has some big advantages:

1. You don’t have to know what you’re committing to when you commit, which sounds completely (oxy)moronic but what we mean is that you’re committing to keeping your datapoints on a “yellow brick road” which you have control over as you go. You commit to something general like “work out more” or “lose weight” and then decide as you go what that means based on your data. 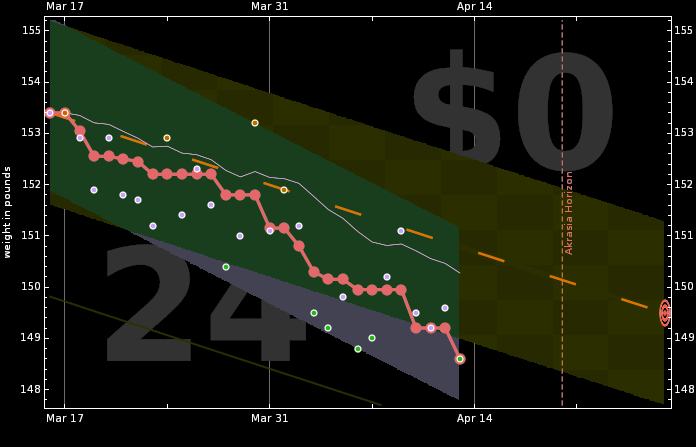 2. You have the flexibility to change your contract in light of new information (like, 40 hours of actual focused work per week is damn hard!). That also sounds like it defeats the point of a commitment contract, but the key is that you can only make changes starting a week in the future. (Details at blog.beeminder.com/​dial which describes the interface of the “road dial” for adjusting the steepness of your yellow brick road.) The point is that akrasia (dynamic inconsistency, hyperbolic discounting) means over-weighting immediate consequences, so to beat akrasia you only need to bind yourself for whatever the horizon on “immediate” is. Based on a study of grocery-buying habits—when buying groceries online for delivery tomorrow people buy a lot more ice cream and a lot fewer vegetables than when they’re ordering for delivery next week—and raw guesswork (so far), we’re taking that Akrasia Horizon to be one week.

So Beeminder as an anti-akrasia tool means committing to keeping all your datapoints on a yellow brick road that you specify and can change the steepness of at any time, with a one-week delay.

You may be wondering how anyone could ever fail to stay on a yellow brick road that’s this flexible. Here’s how: if you’re highly akratic. Such a person may well find it a daily struggle to stay on the road. Yeah, you can always choose to wuss out and flatten the road, but only starting in a week, which you don’t want to do. You want to wuss out Right Now, dammit! I mean, just for now, while you eat this pie, and then you’ll behave again. No such luck though.

The daily struggle to stay on the road does not induce you to touch that road dial. You always want to make it easier “just for today”—which the road dial doesn’t allow—and you always think you’ll get your act together by next week.

We’d love to hear people’s thoughts on this! Perhaps surprisingly, it took a ridiculous number of iterations to get to this point. For the longest time we struggled with different ways to deal with the fact that it’s so often hard to decide what to commit to. We tried many variations of having multiple yellow brick roads for a single goal, so that you could specify an ambitious goal as well as a bare minimum. It was always too messy, or would backfire altogether and be paralyzing. We think the road dial with an akrasia horizon is a big leap forward. And it seems so obvious in retrospect!