Connecting Your Beliefs (a call for help) 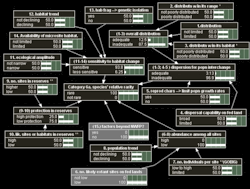 A couple weeks after meeting me, Will Newsome gave me one of the best compliments I’ve ever received. He said: “Luke seems to have two copies of the Take Ideas Seriously gene.”

What did Will mean? To take an idea seriously is “to update a belief and then accurately and completely propagate that belief update through the entire web of beliefs in which it is embedded,” as in a Bayesian belief network (see right).

Belief propagation is what happened, for example, when I first encountered that thundering paragraph from I.J. Good (1965):

I spent a week looking for counterarguments, to check whether I was missing something, and then accepted intelligence explosion to be likely (so long as scientific progress continued). And though I hadn’t read Eliezer on the complexity of value, I had read David Hume and Joshua Greene. So I already understood that an arbitrary artificial intelligence would almost certainly not share our values.

Accepting my belief update about intelligence explosion, I propagated its implications throughout my web of beliefs. I realized that:

I had encountered the I.J. Good paragraph on Less Wrong, so I put my other projects on hold and spent the next month reading almost everything Eliezer had written. I also found articles by Nick Bostrom and Steve Omohundro. I began writing articles for Less Wrong and learning from the community. I applied to Singularity Institute’s Visiting Fellows program and was accepted. I quit my job in L.A., moved to Berkeley, worked my ass off, got hired, and started collecting research related to rationality and intelligence explosion.

But this isn’t just another post on taking ideas seriously. Will already offered some ideas on how to propagate beliefs. He also listed some ideas that most people probably aren’t taking seriously enough. My purpose here is to examine one prerequisite of successful belief propagation: actually making sure your beliefs are connected to each other in the first place.

If your beliefs aren’t connected to each other, there may be no paths along which you can propagate a new belief update.

I wrote this post because I’m not sure what the “making sure your beliefs are actually connected in the first place” skill looks like when broken down to the 5-second level.

I was chatting about this with atucker, who told me he noticed that successful businessmen may have this trait more often than others. But what are they doing, at the 5-second level? What are people like Eliezer and Carl doing? How does one engage in the purposeful decompartmentalization of one’s own mind?