Today we look at quantum physics, which inherently takes place inside a configuration space, and cannot be taken out.

For a start, as you might guess, in quantum physics we deal with distributions of complex amplitudes, rather than probability distributions made up of positive real numbers. At left, I’ve used up 3 dimensions drawing a complex distribution over the position of one particle, A.

You may recall that yesterday, 3 dimensions let us display the position of two 1-dimensional particles plus the system evolution over time. Today, it’s taking us 3 dimensions just to visualize an amplitude distribution over the position of one 1-dimensional particle at a single moment in time. Which is why we did classical configuration spaces first. 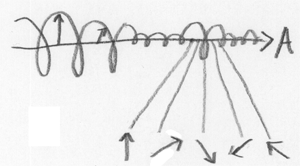 To clarify the meaning of the above diagram, the left-to-right direction is the position of A.

The up-and-down direction, and the invisible third dimension that leaps out of the paper, are devoted to the complex amplitudes. Since a complex amplitude has a real and imaginary part, they use up 2 of our 3 dimensions.

Richard Feynman said to just imagine the complex amplitudes as little 2-dimensional arrows. This is as good a representation as any; little 2D arrows behave just the same way complex numbers do. (You add little arrows by starting at the origin, and moving along each arrow in sequence. You multiply little arrows by adding the angles and multiplying the lengths. This is isomorphic to the complex field.) So we can think of each position of the A particle as having a little arrow associated to it.

Drawing a neat little graph of the A+B system would involve having a complex amplitude for each joint position of the A and B particles, which you could visualize as a hypersurface in 4 dimensions. I’d draw it for you, but I left my 4-dimensional pencil in the pocket of the 3rd leg of my other pants.

You might think that you could recover the structure by figuring out which particle is “really which”—i.e. if you see a “particle far forward, particle in middle”, you can guess that the first particle is A, and the second particle is B, because only A can be far forward; B just stays in the middle. (This configuration would lie in at the top of the original plaid pattern, the part that got folded over).

The problem with this is the little triangular region, where the folded plaid intersects itself. In this region, the folded-over amplitude distribution gets superposed, added together. Which makes an experimental difference, because the squared modulus of the sum is not the sum of the squared moduli.

In that little triangular region of quantum configuration space, there is simply no fact of the matter as to “which particle is which”. Actually, there never was any such fact; but there was an illusion of individuality, which in this case has broken down.

But even that isn’t the ultimate reason why you can’t take quantum physics out of configuration space.

(I pause to observe that physics books make it way, way, way too hard to figure out this extremely important fact. You’d think they’d tell you up front, “Hey, the evolution of a quantum system depends on stuff like the second derivative of the amplitude distribution, so you can’t possibly break it down into the evolution of individual configurations.” When I first saw the Schrödinger Equation it confused the hell out of me, because I thought the equation was supposed to apply to single configurations.)

If I’ve understood the laws of physics correctly, quantum mechanics still has an extremely important property of locality: You can determine the instantaneous change in the amplitude of a single configuration using only the infinitesimal neighborhood. If you forget that the space is continuous and think of it as a mesh of computer processors, each processor would only have to talk to its immedatien neighbors to figure out what to do next. You do have to talk to your neighbors—but only your next-door neighbors, no telephone calls across town. (Technical term: “Markov neighborhood.”)

Conway’s Game of Life has the discrete version of this property; the future state of each cell depends only on its own state and the state of neighboring cells.

The second derivative—Laplacian, actually—is not a point property. But it is a local property, where knowing the immediate neighborhood tells you everything, regardless of what the rest of the distribution looks like. Potential energy, which also plays a role in the evolution of the amplitude, can be computed at a single positional configuration (if I’ve understood correctly).

There are mathematical transformations physicists use for their convenience, like viewing the system as an amplitude distribution over momenta rather than positions, which throw away this neighborhood structure (e.g. by making potential energy a non-locally-computable property). Well, mathematical convenience is a fine thing. But I strongly suspect that the physically real wavefunction has local dynamics. This kind of locality seems like an extremely important property, a candidate for something hardwired into the nature of reality and the structure of causation. Imposing locality is part of the jump from Newtonian mechanics to Special Relativity.

So you can’t say, as you can in classical physics, “If I had infinite knowledge about the system, all the particles would be in one definite position, and then I could figure out the exact future state of the system.”

If you had a point mass of amplitude, an infinitely sharp spike in the quantum arena, the amplitude distribution would not be twice differentiable and the future evolution of the system would be undefined. The known laws of physics would crumple up like tinfoil. Individual configurations don’t have quantum dynamics; amplitude distributions do.

A point mass of amplitude, concentrated into a single exact position in configuration space, does not correspond to a precisely known state of the universe. It is physical nonsense.

It’s like asking, in Conway’s Game of Life: “What is the future state of this one cell, regardless of the cells around it?” The immediate future of the cell depends on its immediate neighbors; its distant future may depend on distant neighbors.

In Conway’s Game of Life, the velocity of a glider is not a separate, additional fact about the board. Cells are only “alive” or “dead”, and the apparent motion of a glider arises from a configuration that repeats itself as the cell rules are applied. If you know the life/​death state of all the cells in a glider, you know the glider’s velocity; they are not separate facts.

Imagine trying to say, in a classical universe, “I twice differentiate the probability distribution over these particles’ positions, to physically determine how fast they’re going. So if I learned new information about where the particles were, they might end up moving at different speeds. If I got very precise information about where the particles were, this would physically cause the particles to start moving very fast, because the second derivative of probability would be very large.” Doesn’t sound all that sensible, does it? Don’t try to interpret this nonsense—it’s not even analogously correct. We’ll look at the horribly misnamed “Heisenberg Uncertainty Principle” later.

(Though you can regard the entire state of a quantum system—the whole amplitude distribution—as a single point in a space of infinite dimensionality: “Hilbert space.” But this is just a convenience of visualization. You imagine it in N dimensions, then let N go to infinity.)

Part of The Quantum Physics Sequence