Context: This is the first in a series of year-end updates from CFAR. This post mainly describes what CFAR did over the past two years, and what it plans to do next year; other posts in the series will describe more about its mission, financials, and impact.

(12/​29/​19: Edited to mention CFAR’s mistakes regarding Brent, and our plans to publicly release our handbook). 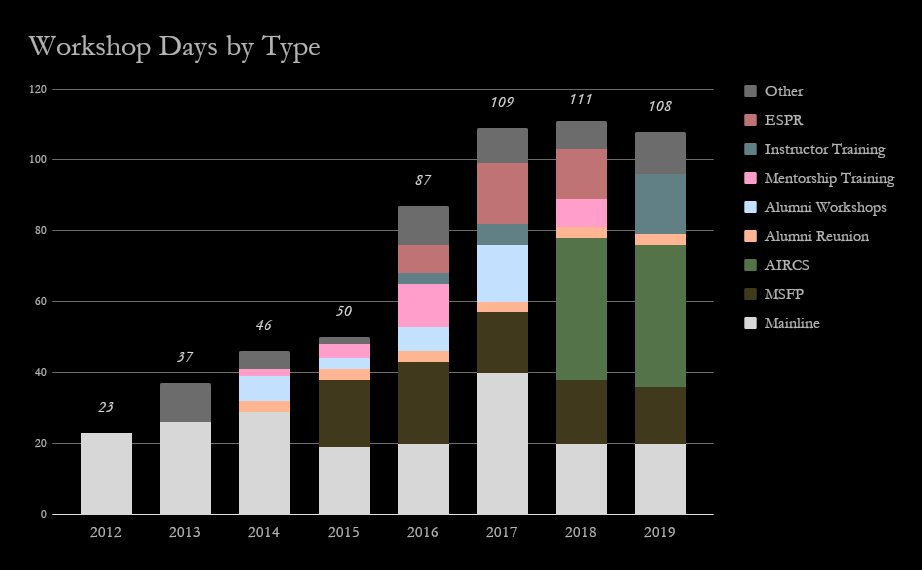 But the distribution of workshops has changed considerably. Most notably, in 2018 we started co-running AIRCS with MIRI, and since then we’ve been allocating roughly ⅓ of our staff time[2] to this project.[3]

AI Risk for Computer Scientists (AIRCS) workshops are designed to recruit and train programmers for roles doing technical alignment research. The program name isn’t perfect: while most attendees are programmers, it also accepts mathematicians, physicists, and others with significant technical skill.

We co-run these workshops with MIRI—the staff is mostly a mix of current and former CFAR and MIRI staff, and the curriculum is roughly half rationality material and half object-level content about the alignment problem. So far, MIRI has hired six AIRCS graduates (more are in the pipeline). While these workshops are designed primarily to benefit MIRI’s research programs, the curriculum includes a variety of other perspectives (e.g. Paul Christiano’s IDA), and AIRCS graduates have also subsequently accepted positions at other alignment orgs (e.g. FHI, Ought, and the OpenAI alignment team).

We’re excited about these workshops. So far, 12 AIRCS graduates have subsequently taken jobs or internships doing technical safety research,[4] of which (from what we can tell), AIRCS played a non-trivial causal role[5] in 9 of these outcomes. AIRCS also seems to help participants learn to reason better about the alignment problem, and to give MIRI greater familiarity with candidates (thus hopefully improving average quality of hires).

Overall, we’ve been impressed by the results of this program so far. We’re also excited about the curricular development that’s occurred at AIRCS, parts of which have been making their way into our curriculum for other programs.

Another notable strategic change over this period was that we decided to start running many more workshops in Europe. In total, 23% of the workshop days CFAR ran or co-ran in 2018 and 2019 occured in Europe—these programs included three mainlines, a mentorship training, one leg of our instructor training, a workshop at FHI featuring members of their new Research Scholars Program, and ESPR 2018.[6]

Aside from ESPR and the FHI workshop, all of these programs were held in the Czech Republic. This is partly because we’re excited about the Czech rationalist/​EA scene, and partly because the Czech Association for Effective Altruism does a fantastic job of helping us with ops support, making it logistically easier for us to run workshops abroad.

In 2019, we spun off ESPR (the European Summer Program on Rationality) into a new independent organization run by Jan Kulveit, Senior Research Scholar in FHI’s Research Scholars Program and one of the initial organizers of the Czech rationality/​EA community. We sent Elizabeth Garrett to help with the transition, but Jan organized and ran the program independently, and from what we can tell the program went splendidly.

We ran our second-ever instructor training program this year, led by Eli Tyre and Brienne Yudkowsky. This program seems to me to have gone well. I think this is probably partly because the quality of the cohort was high, and partly because Eli and Brienne’s curriculum seemed to manage (to a surprising-to-all-of-us degree) to achieve its aim of helping people do generative, original seeing-type thinking and research. Going forward, we’ll be grateful and proud to have members of this cohort as guest instructors.

CFAR’s internal processes and culture seem to me to have improved markedly over the past two years. We made a number of administrative changes—e.g. we improved our systems for ops, budgets, finances, and internal coordination, and acquired a permanent venue, which reduces the financial cost and the time cost of running workshops. And after spending significant time investigating our mistakes with regard to Brent, we reformed our hiring, admissions and conduct policies, to reduce the likelihood such mistakes reoccur.

It also seems to me that our internal culture and morale improved over this time. Compared with two years ago, my impression is that our staff trust and respect each other more—that there’s more camaraderie, and more sense of shared strategic orientation.

From the outside, I expect CFAR’s strategy will look roughly the same next year as it has for the past two years. We plan to run a similar distribution of workshops, to keep recruiting and training technical alignment researchers (especially for/​with MIRI, although we do try to help other orgs with recruiting too, where possible), and to continue propagating epistemic norms intended to help people reason more sanely about existential risk—to develop the skills required to notice, rather than ignore, crucial considerations; to avoid taking rash actions with large effect but unclear sign; to model and describe even subtle intuitions with rigor.

So far, I think this strategy has proved impactful. I’m proud of what our team has accomplished, both in terms of measurable impact on the AI safety landscape (e.g. counterfactual additional researchers), and in terms of more difficult to measure effects on the surrounding culture (e.g. the propagation of the term “crux”).

That said, I think CFAR still struggles with some pretty basic stuff. For example:

In 2020, we plan to devote significant effort toward trying to mitigate these and similar problems. Assuming we can find a suitable candidate, one step we hope to take is hiring someone to work alongside Dan Keys to help us gather and analyze more data. We’re also forming an outside advisory board—this board won’t have formal decision-making power, but it will have a mandate to review (and publish public reports on) our progress. This board is an experiment, which by default will last one year (although we may disband it sooner if it turns out to cost too much time, or to incentivize us to goodhart, etc). But my guess is that both their advice, and the expectation that we’ll regularly explain our strategy and decisions to them, will cause CFAR to become more strategically oriented—and hopefully more legibly so!—over the coming year.

(We’re also planning to publicly release our workshop handbook, which we’ve previously only given to alumni. Our reservations about distributing it more widely have faded over time, many people have asked us for a public version, and we’ve become increasingly interested in getting more public criticism and engagement with our curriculum. So we decided to run the experiment).

From what I can tell, CFAR’s impact so far has been high. For example, of the 66 technical alignment researchers at MIRI, CHAI, FHI, and the DeepMind and OpenAI alignment teams[8], 38 have attended a workshop of some sort, and workshops seem to have had some non-trivial causal role in at least 15 of these careers.

I also suspect CFAR has other forms of impact—for example, that our curriculum helps people reason more effectively about existential risk, that AIRCS and MSFP give a kind of technical education into alignment research that is both valuable and still relatively rare, and that the community-building effects of our programs probably cause useful social connections to form that we wouldn’t generally hear about. Our evidence on these points is less legible, but personally, my guess would be that non-career-change-type impacts like these account for something like half of CFAR’s total impact.

While our workshops have, in expectation, helped cause additional research hires to other technical safety orgs, and one might reasonably be enthusiastic about CFAR for reasons aside from the career changes it’s helped cause, I do think our impact has disproportionately benefited MIRI’s research programs. So if you think MIRI’s work is low-value, I think it makes sense to decrease your estimate of CFAR’s impact accordingly. But especially if MIRI research is one of the things you’d like to see continue to grow, I think CFAR represents one of the best available bets for turning dollars (and staff time) into existential risk reduction.

CFAR could benefit from additional money (and staff) to an unusual degree this year. We are not in urgently dire straits in either regard—we have about 12 months of runway, accounting for pending grant payments, and our current staff size is sufficient to continue running lots of workshops. But our staff size is considerably smaller than it was in 2017 and 2018, and we expect that we could fairly easily turn additional staff into additional workshop output. Also, our long-term sources of institutional funding are uncertain, which is making it harder than usual for us to make long-term plans and commitments, and increases the portion of time we spend trying to raise funds relative to running/​improving workshops. So I expect CFAR would benefit from additional dollars and staff somewhat more than in recent years. If you’d like to support us, donate here—and if you’re interested in applying for a job, reach out!