Author’s note: During CFAR’s 4.5d workshops, concepts that had been formalized as “techniques,” and which could be described as algorithms and practiced in isolation, generally received 60+ minute sessions. Important concepts which did not have direct practical application, or which had not been fully pinned down, were often instead taught as 20-minute “flash classes.” The idea was that some things are well worth planting as seeds, even if there was not room in the workshop to water and grow them. There were some 30 or 40 flash classes taught at various workshops over the years; the most important dozen or so make up the next few entries in this sequence.

By now, you should have a set of concepts that help you describe the common threads between these three stories. You can point at goal factoring and turbocharging, and recognize ways in which the first person in each example is sort of missing the point. Those first three people, as described, are following the rules sort of just because—they’re doing what they’re supposed to do, because they’re supposed to do it, without ever pausing to ask who’s doing the supposing, and why. The latter three, on the other hand, are moved by the essence of the thing, and to the extent that they’re following a script, it’s because they see it as a useful tool, not that they feel constrained by it.

How does this apply to a rationality workshop?

Imagine you’re tutoring someone in one of the techniques—say, TAPs—and they interrupt to ask “Wait, what was step three? I can’t remember what came next,” and you realize that you don’t remember step three, either. What do you do?

You could give up, and just leave them with an incomplete version of the technique.

You could look back through the workbook, and attempt to piece together something that makes sense from bullet points that don’t really resonate with your memory of the class.

Or you could just take a broader perspective on the situation, and try to do the sensible thing. What seems like a potentially useful next question to ask? Which potential pathways look fruitful? What step three would you invent, if you were coming up with TAPs on your own, for the first time?

The basic CFAR algorithms—like the steps of a dance or the particulars of the quadratic formula—are often helpful. But they can become a crutch or a hindrance if you stick to them too closely, or follow them blindly even where they don’t seem quite right. The goal is to develop a general ability to solve problems and think strategically—ideally, you’ll use the specific, outlined steps less and less as you gain fluency and expertise. It can be valuable to start training that mindset now, even though you may not feel confident in the techniques yet.

You can think of this process as keeping Polaris in sight. There should be some sort of guiding light, some sort of known overall objective that serves as a check for whether or not you’re still pointed in the right direction. In the case of applied rationality, Polaris is not rigid, algorithmic proficiency, but a fluid and flexible awareness of all sorts of tools and techniques that mix and match and combine in whatever way you need them to.

Or, in other words: you’re here to solve your problems and achieve your goals. Everything else in this sequence is useful only insofar as it helps with that.

“Using a CFAR technique” often doesn’t mean taking out pen and paper and spending minutes or hours going through all of the steps. Instead, it involves five seconds of thought, on the fly, when a relevant situation arises.

Note that these five-second versions often only use a fragment of the technique (such as checking whether an aversion is well-calibrated), rather than thoroughly applying every step.

Some advantages of using five-second versions:

You can use them more often, at the moment when they’re relevant, without having to “boot up” an effortful, time-consuming mode of thinking (many CFAR instructors use these something like twenty times per day).

You can integrate them fluidly with your thinking, rather than having to interrupt your flow and remember what thoughts or activities to return to.

You can practice them many, many times.

You can develop multiple variations, including your own independent inventions.

Most importantly of all: if a larger, more effortful version of a technique is something you simply will not do, then a five-second version you will do is infinitely better than nothing.

If I say “Hi, how are you?” and you live in white middle class America, you’ll almost certainly say something resembling “Pretty good, you?” If I ask something like “What’s happened this week that you’ll remember five years from now?” I’ll get a response that’s a lot less predictable, but it’ll most likely be made out of words that I at least sort of understand.

There’s a lot going on in the space between question and answer, and thanks to the work of generations of psychologists and neuroscientists (and a few unlucky souls with iron rods through their brains and so forth), we’re getting closer and closer to having some clear/​workable/​reliable causal models.

We don’t have them yet, though, and while we’re waiting, it’s interesting to see what we can accomplish if we don’t even try. Call it a black box, and treat humans as complicated input/​output devices with a whole bunch of levers and knobs—a stimulus goes in, some stuff happens under the hood, and a response comes out.

If the stimulus/​response doesn’t take very long (it’s an easy question, or a familiar motion like catching a tossed ball, or a visceral response like one’s reaction to a strong smell), then in our model the line will be short, as will be the distance between the input and the output.

If, on the other hand, there’s significant processing involved, then we can imagine a much longer line, and a greater distance between input and output:

In the example above, the thought process is fairly straightforward (at least for people who are comfortable with mental math). Once you’ve picked a strategy, it’s mostly just churning away until the calculation is complete.

There are plenty of stimuli, though, that don’t cause a straight march from stimulus to response, but instead send us all over our own minds, activating a large number of concepts and processes before finally cashing out to some new conclusion or action:

And furthermore, there isn’t always a single line. Sometimes, the same stimulus can spark multiple threads of thought, each of which will have its own length and path. 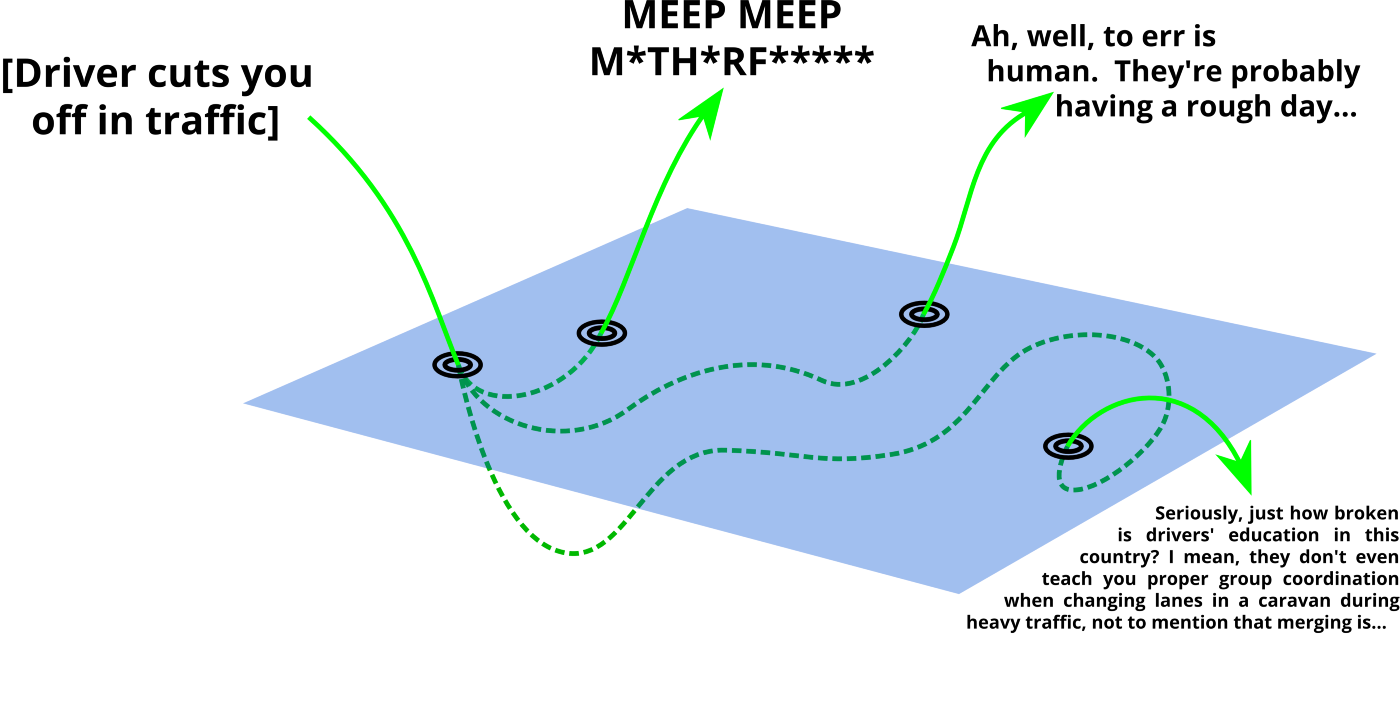 It’s also kind of fun to imagine what happens when things get subconscious, such as when we find ourselves making connections or entering emotional states that we can’t fully explain or justify. It’s pretty easy to imagine a second, deeper, opaque-ish surface that represents the limit of what we can “see” with our metacognition, but we’ll hold off on that for now, lest we summon the ogres. 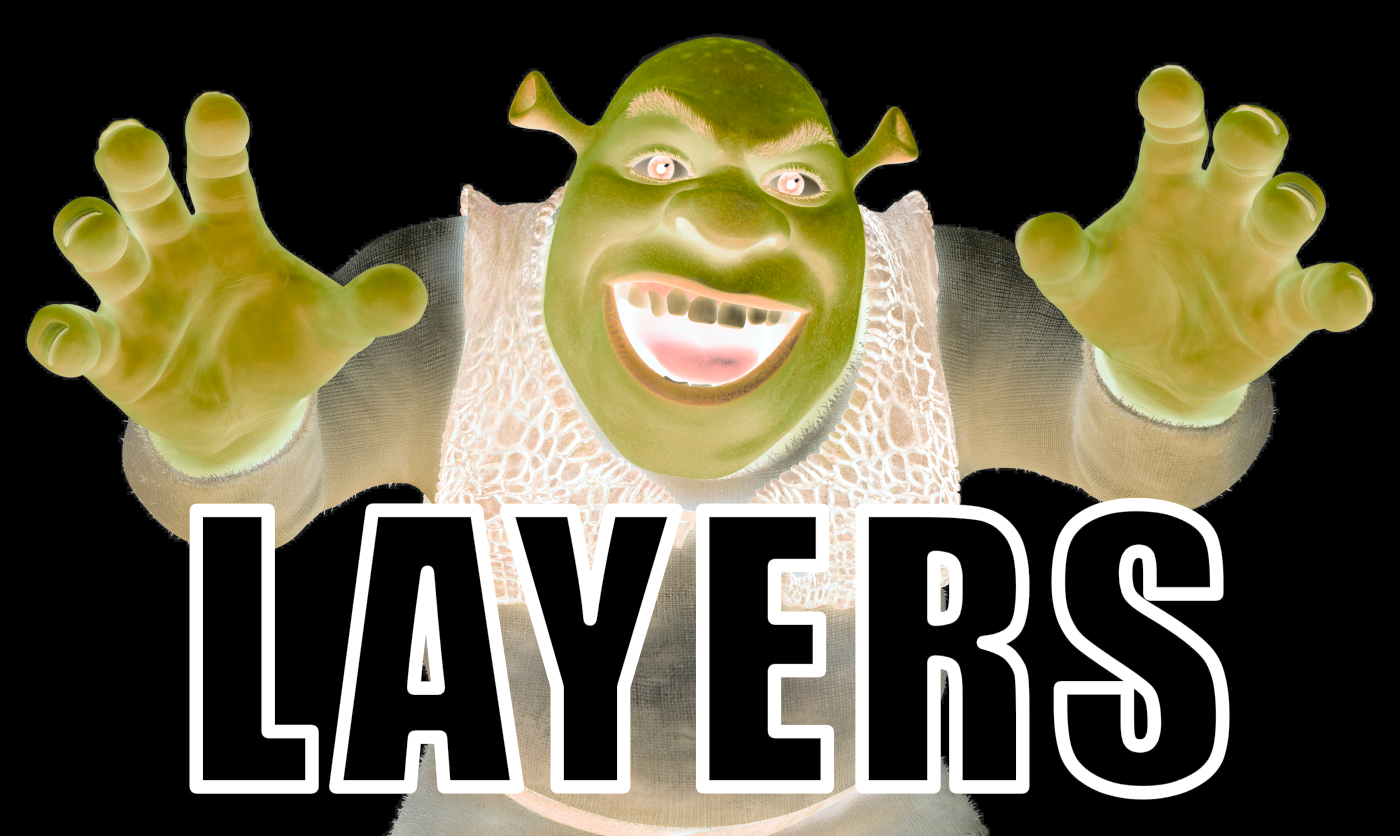 Astute participants may be thinking “isn’t this just System 1 and System 2 again?” and there is certainly a lot of overlap with that model (which is another wrong-but-useful approximation).

However, where S1 and S2 are discrete (or at least discrete-ish), this model instead treats the range of possible thoughts as continuous. There is no single bucket for “short thoughts” that is distinct from a single bucket for “long thoughts.” Instead, all thoughts are treated as the same basic sort of thing: some amount of below-the-surface processing, ending in an output.

What makes this model interesting from an applied rationality perspective is that it raises the question of whether a given thought is an appropriate length.

Some thoughts are too short, and need to be lengthened, and some CFAR techniques can be thought of as designed to do precisely that. Think of goal factoring and focusing, for instance, which take flinches and decisions that might otherwise be somewhat knee-jerk, and slows down and fleshes out and expands them, allowing for more processing before a final output.

Other thoughts are too long, and need to be shortened. CFAR has fewer named techniques in this arena, but TAPs and CoZE both play in this space, as well as Resolve Cycles. The whole concept of policy-level decisionmaking is similarly a thought-shortening frame—the idea being to set a policy so that future instances of a given problem or scenario can be addressed quickly and without a lot of meandering.

It’s interesting to ask oneself the question “Where do I go wrong because I put in too little thought, and arrive at my outputs too quickly?” and it’s worth asking the mirror question “where am I spending too much time and attention, and should instead be working to shorten the processing time between stimulus and response?”

Some stimulus/​response patterns that tend to be too short for many people:

CFAR canon has a handful of techniques that are good at increasing the distance between input and output, and once you get “some thoughts are shorter than they ought to be” into your head as an organizing principle, you may find yourself reaching for those techniques more frequently and more appropriately.

Conversely, some stimulus/​response patterns that tend to be too long:

…and again, there are techniques that can help. Being able to think “oh, this is a line of reasoning that I should be able to skip to the end of, or at least cache somehow once I finish, so that I can simply call it back up and don’t have to rederive it every time,” has been a big net positive for many people.

Finally (though this is a small benefit), the simple visual metaphor of moving the exit point for a given thought can help with things like non-useful emotional triggering during intense conversation. The above model has helped some CFAR staff recognize certain … golf holes? Geysers? Lava tubes? … where their thoughts tend to drift, and given them a clear way to evaluate potential replacements (“Is this new kind of ‘answer’ sufficiently far enough from my old habits and reflexes that I won’t just slide right back into my previous ingrained behavior?”).

It’s neat that this model post-dicts a lot of things that make sense for entirely different reasons (such as slowly counting to ten before speaking, or rehearsing a given mental process until it becomes easy). As far as “tools you could teach a ten-year-old” go, we posit that this one has a lot of potential in terms of its sensibility and versatility.