Tarnished Guy who Puts a Num on it

Why Elden Ring is great, and how not to die binomially.

One reason I haven’t written as much in the last two months is that I’ve been playing a lot of Elden Ring. It’s a video game in which you explore a vast and beautiful open world full of monsters who repeatedly kill you in gruesome ways. It’s a punishing and often frustrating experience that demands skill and discipline to persevere. You wouldn’t think that this is a formula for mass entertainment, but Elden Ring is massively popular. And with good reason. 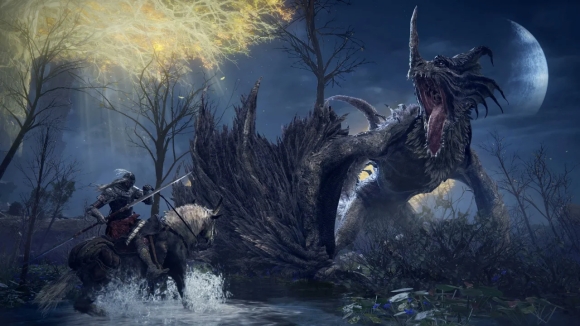 I’ve written about some of my favorite video games before and what drives the player in each one, whether it’s the addictive minute-by-minute gameplay or a fascinating mystery to uncover as the narrative unforlds. Elden Ring has a background story (co-written by George R. R. Martin) to uncover, but it’s not central to the experience. The gameplay is pretty standard for action-RPGs: you control a character in third-person view, with movement, dodging, and swinging of comically-oversized weapons. Watching a random minute of someone playing Elden Ring doesn’t appear impressive.

Instead, the main goal of playing Elden Ring is to get really good at Elden Ring, because being really good at a very difficult game is incredibly fun. Like other very difficult games, Elden Ring has a progression system with your character upgrading their attributes and gear, but this used just as much to distract the player from the hard work of “gettin gud”. Elden Ring is a rare game where I’m having more fun on my second playthrough — even though my character is weak and has basic gear, the skill I’ve built up lets me breeze through parts that took me long hours to slog through my first time around.

My friend called these games a “stoic self-control fantasy“. Getting good mostly isn’t about committing some complex sequence of finger movements to muscle memory like you would to play a piano piece. Each challenging boss fights requires reacting correctly to one of several possible moves by your adversary, often the opposite of your instinctive reaction the first time you face them. Success requires the self-control to overcome your initial instinct, and to let your skill overcome your fear even as you have no idea from second to second what the next move and counter-move are going to be.

The other thing that success requires is leveling up your vigor so that you don’t get one-shot.

Let’s look in a bit more detail at the game mechanics and the math behind them. Your character in Elden Ring has eight attributes that can be increased with experience. Vigor, mind, and endurance affect the available pools of health, focus (a resource used for special moves), and stamina (a resource for most offensive and defensive actions). The other five attributes affect your ability to use various weapons and skills effectively, like strength for swinging heavy weapons or intelligence for launching powerful spells from long range. 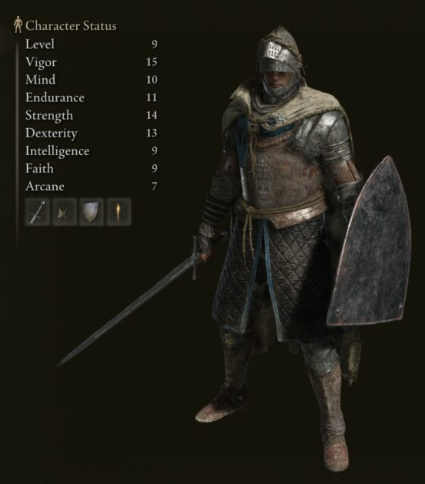 You can’t be good at everything at once, so you must trade off some attributes for others. People plan out “builds”: templates of attribute allocation to pair with particular gear and a desired playing style. You can sacrifice intelligence for strength and build a character that needs to close the distance on an enemy fast, or have a high-faith low-endurance build that needs to constantly evade and disengage to recharge.

But there’s one thing all good builds have in common: they all have high vigor. Because when you lose your health, you die.

Here’s an example of the enemy you face in Elden Ring — a pale asshole wearing the skin of dead gods named, appropriately, the Godskin Asshole Apostle: 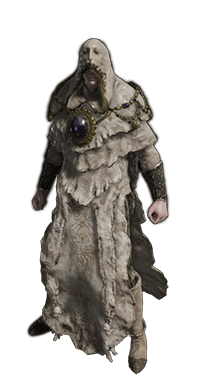 GA has nine different attack moves and combinations, each requiring a particular counter. Here are four of them: 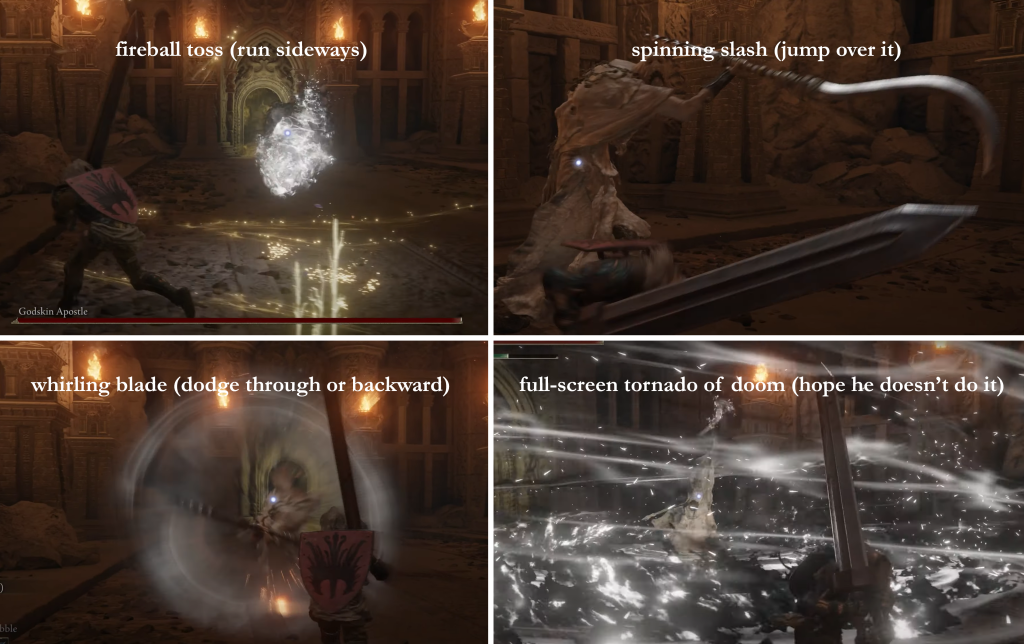 Here’s how the math of the encounter works: GA attacks you with one of his moves, and if you counter it successfully you have an opening to hit him back. Let’s say it takes you 30 hits to bring him down, each of his hits takes most of your health, and you have 5 flasks that replenish it. So, you need to successfully counter and hit him 30 times before he hits you 6 times. In other words, to succeed at least 30 out of 35 “moves”.

If your chance of countering any single move is p, your chance of sending the leathery asshole back to hell is given by the binomial distribution. You can calculate this using the BINOM.DIST function in Excel or Google sheets.

How hard is it to hit a 84% success rate on a repeated action? We can compare this to shooting basketball free throws (a favorite subject of this blog). I don’t play basketball regularly, and I hit about 40% of my free throws when I’m out in the park. The NBA average, i.e. the average of elite athletes who have dedicated their lives to pursuing basketball perfection, is only 77.8%. No team averages above 84% as a group, and only 42 of the 400+ players in the association do.

Back to Elden Ring. After getting skinned by the apostle a couple dozen times I was probably clocking around 80% success rate and yet I was still dying. And the reason was that a couple of the GA’s moves like the tornado or spinning slash were not taking away most of my health but all of it. Which meant that I couldn’t mess up a counter to those moves even once in the entire fight. That’s much harder than 84%.

I decided to explore the world a bit and level up before re-engaging. Prior to that, I was focused on increasing my damage output. Boosting my damage by 20% would have meant that I only needed 24 hits to bring the apostle down. My chance of victory would be pbinom(14,20,.80) * pbinom(10,10,.80) = 10%. But beefing up my health to survive all the hits would bring me up all the way to pbinom(30,35,.80) = 27%, a much better chance. I put some levels into vigor, and beat the Godskin Apostle on my second try.

(I think the tornado would still have one-shot me, but it’s a rare move and I learned to forego attacking and run to the farthest corner of the room at the merest suggestion the GA may try it. Paranoia can be a substitute for resilience.) 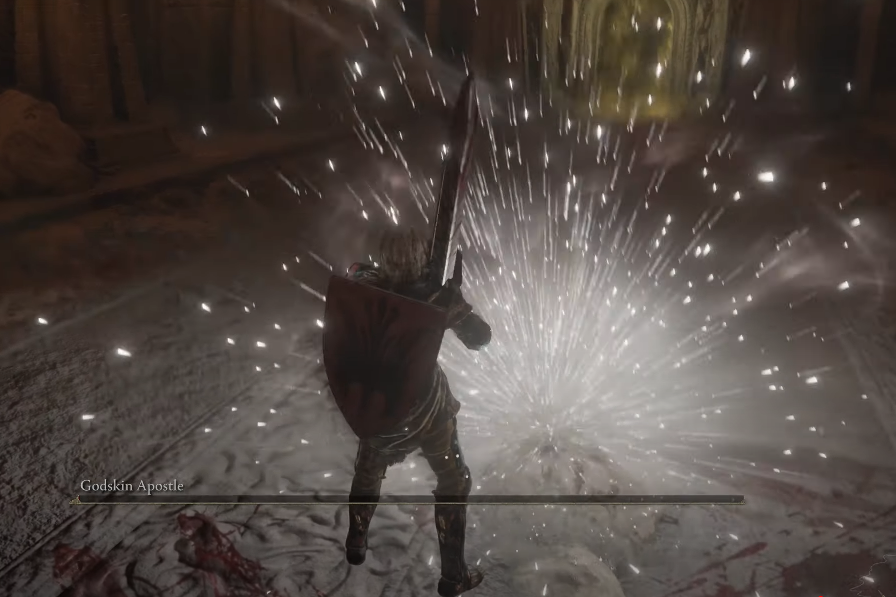 I think this lesson comes up in other areas of life as well: if there’s anything that can knock you out in one blow you should focus on that above all else. Learning how to avoid it, and ideally building up the resilience to survive it even if it takes you time to recover.

This applies to investing: trading on margin multiplies your returns, but also opens you up to losing your entire bankroll even if the underlying investment only dropped by a fraction. You can apply it to relationships as well, if there’s one work fuck-up that will immediately cost you your job or one type of transgression your significant other won’t tolerate. Optimize for not getting one-shot before taking your own shots.

The first rule of life is not to die, and a game where you die a lot is a fun place to learn this.