(Cross posted on my blog. Probably a little repetitive for the LessWrong crowd, but it’s here if you’re interested.)

I believe they refer to that as a, smiley face. They’re frequently used by idiots at the end of emails and text messages.

I have a dilemma. I live in an era of text messaging, Slack, and internet forums. Sometimes I’ll be in a conversation where I and my conversational partner end up using smiley faces a lot. But, like Larry David, I find that they can get annoying.

“So? Just stop using them then.” you may be thinking. If only it were that simple. 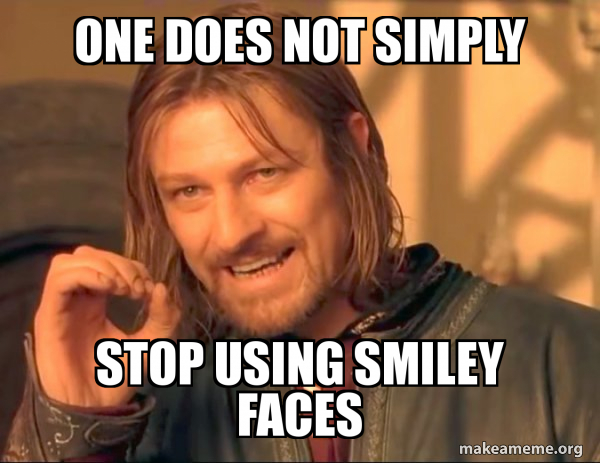 You see, once I have already established this as a normal response:

If I then respond with just “thanks”, well, it seems like something is wrong. I’ve established this pattern of emphatic thank yous as a baseline, and now I’m going way below that baseline, so I must be ticked off or something.

Why would that be? There are various ways to think about it. Let’s start off with denotation vs connotation. Denotation is about the literal meaning of the word. Connotation is more… “catch my drift?”. The denotation of me saying “thanks” − the literal meaning of it − is, well, an expression of me being thankful. But the connotation can vary drastically depending on the context. And if we’re in a context where I usually give responses such as “That’s awesome, thanks :)))”, the connotation of a measley “thanks” is that I’m upset.

Or maybe a better way to frame it is as text vs subtext. 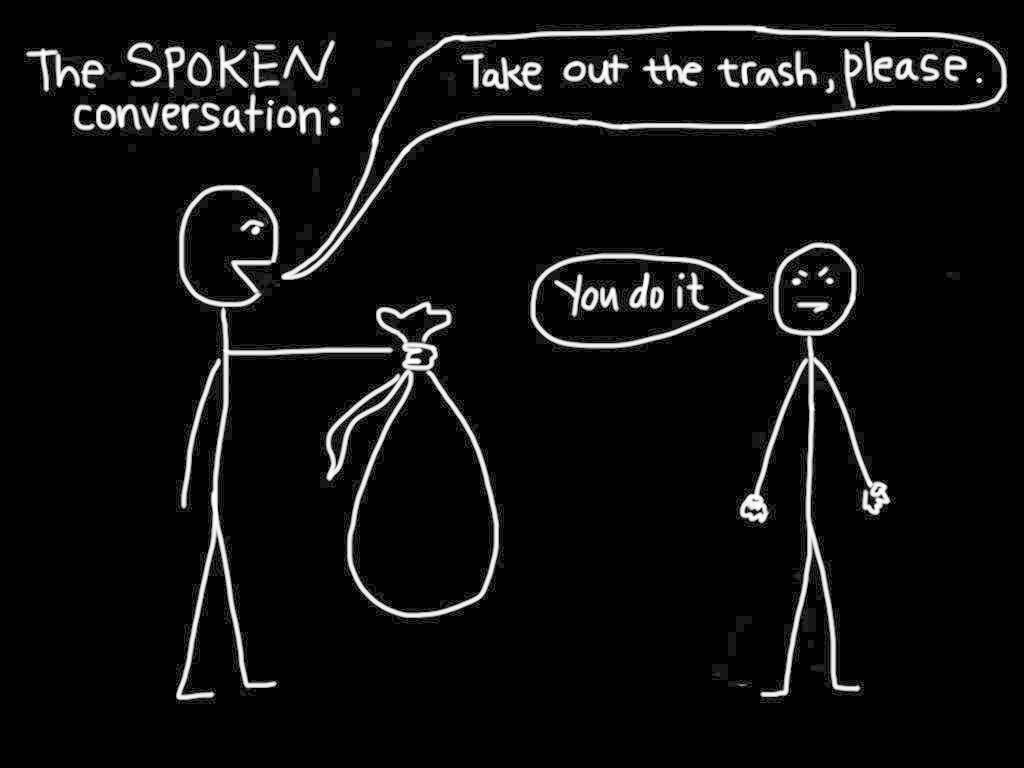 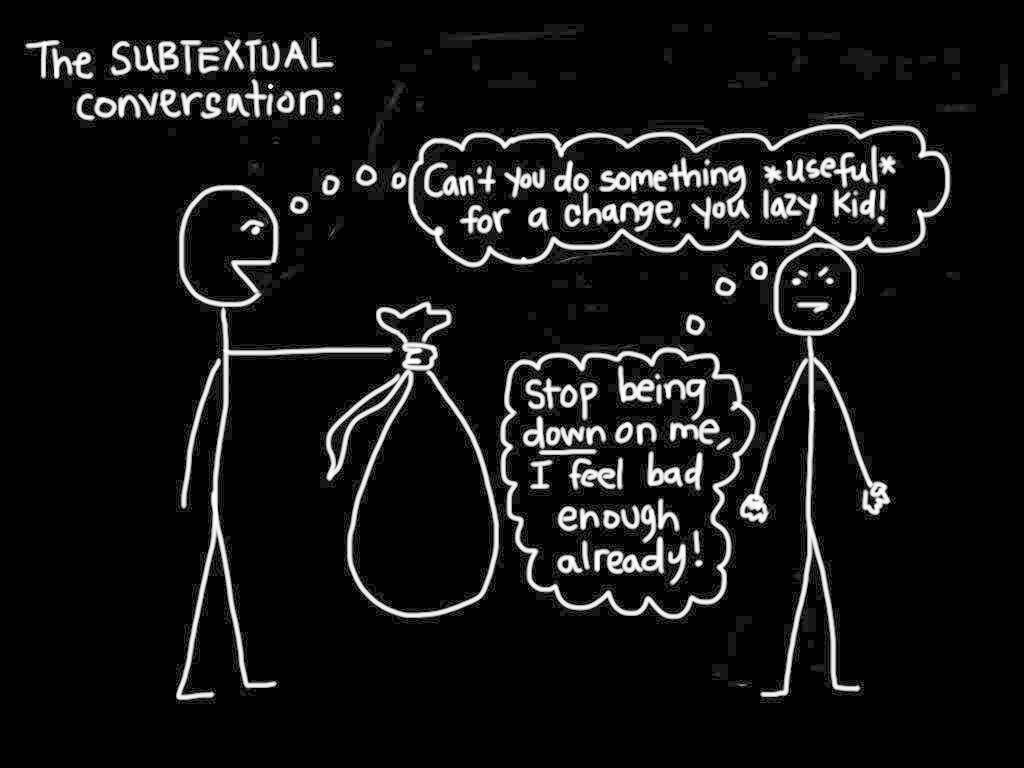 Those both work. But I think a more fun way to frame it is in terms of bayesian evidence.

“What on Earth do I have to do to convince you? ”

“To convince me that you harbor no ambitions of becoming a Dark Lord?” said Professor Quirrell, now looking outright amused. “I suppose you could just raise your right hand.”

“What?” Harry said blankly. “But I can raise my right hand whether or not I—” Harry stopped, feeling rather stupid.

“Indeed,” said Professor Quirrell. “You can just as easily do it either way. There is nothing you can do to convince me because I would know that was exactly what you were trying to do. And if we are to be even more precise, then while I suppose it is barely possible that perfectly good people exist even though I have never met one, it is nonetheless improbable that someone would be beaten for fifteen minutes and then stand up and feel a great surge of kindly forgiveness for his attackers. On the other hand it is less improbable that a young child would imagine this as the role to play in order to convince his teacher and classmates that he is not the next Dark Lord. The import of an act lies not in what that act resembles on the surface, Mr. Potter, but in the states of mind which make that act more or less probable.”

Harry blinked. He’d just had the dichotomy between the representativeness heuristic and the Bayesian definition of evidence explained to him by a wizard.

But that’s a very surface-level way of looking at things. In order to look beneath the surface, you have to start thinking about “the states of mind which make that act more or less probable”. You have to start applying Bayes’ theorem.

Bayes’ theorem basically says to think about this smiley face situation like this. “If everything was cool, how likely is it that Adam would avoid using a smiley face? Not very likely. He always uses smiley faces in these sorts of situations. Hm. And what about if he was pissed? Definitely more likely that he wouldn’t use one in that situation. So this seems like it points towards him being pissed.”

This is a perfect segue into plausible deniability.

“Well,” Harry said, as their shoes pattered across the tiles, “I can’t just go around saying ‘no’ every time someone asks me about something I haven’t done. I mean, suppose someone asks me, ‘Harry, did you pull the prank with the invisible paint?’ and I say ‘No’ and then they say ‘Harry, do you know who messed with the Gryffindor Seeker’s broomstick?’ and I say ‘I refuse to answer that question.’ It’s sort of a giveaway.”

The thing is though, for plausible deniability, it’s hard to establish it after the fact. It’s something you kinda have to plan ahead for.

Damn. Things are looking pretty bleak for my smiley face situation. I think I may have a way out of it though: prior probability.

Remember when we talked about bayesian evidence? Well, that was only one half of the story. The other half is prior probability. Here’s how it works. You start off with a belief: your “prior”. Then you observe some evidence that points in a particular direction. Then you update your belief. And your new belief is your “posterior”.

There were some big words in there, but it’s really not that bad. The big idea is that you have some starting point, and then you shift/​update. Strong evidence means a big shift. Weak evidence means a small shift.

Anyway, I said that prior probability might be my out, so let me explain why. If I’m talking to a person who knows me well enough to know that I’m a nice person and a good communicator, their starting point would be that me saying “thanks” wouldn’t imply passive-aggression. Sure, it is evidence of it. It points towards it. But since we’re starting from a point of “it’s highly unlikely Adam would be passive-aggressive”, it’d only move them to a point of “it’s pretty unlikely Adam is being passive-aggressive”. Eg. maybe it’d move them from 0.1% to 0.5%.

PS: I’m not actually (that) neurotic about my smiley face usage. I just thought it’d be a fun way to talk about bayesian thinking :)