Welcome. This week we discuss the sixteenth section in the reading guide: Tool AIs. This corresponds to the last parts of Chapter Ten.

Reading: : “Tool-AIs” and “Comparison” from Chapter 10

Holden prompted discussion of the Tool AI in 2012, in one of several Thoughts on the Singularity Institute:

...Google Maps is a type of artificial intelligence (AI). It is far more intelligent than I am when it comes to planning routes.

Google Maps—by which I mean the complete software package including the display of the map itself—does not have a “utility” that it seeks to maximize. (One could fit a utility function to its actions, as to any set of actions, but there is no single “parameter to be maximized” driving its operations.)

Google Maps (as I understand it) considers multiple possible routes, gives each a score based on factors such as distance and likely traffic, and then displays the best-scoring route in a way that makes it easily understood by the user. If I don’t like the route, for whatever reason, I can change some parameters and consider a different route. If I like the route, I can print it out or email it to a friend or send it to my phone’s navigation application. Google Maps has no single parameter it is trying to maximize; it has no reason to try to “trick” me in order to increase its utility.

In short, Google Maps is not an agent, taking actions in order to maximize a utility parameter. It is a tool, generating information and then displaying it in a user-friendly manner for me to consider, use and export or discard as I wish.

Every software application I know of seems to work essentially the same way, including those that involve (specialized) artificial intelligence such as Google Search, Siri, Watson, Rybka, etc. Some can be put into an “agent mode” (as Watson was on Jeopardy!) but all can easily be set up to be used as “tools” (for example, Watson can simply display its top candidate answers to a question, with the score for each, without speaking any of them.)

The “tool mode” concept is importantly different from the possibility of Oracle AI sometimes discussed by SI. The discussions I’ve seen of Oracle AI present it as an Unfriendly AI that is “trapped in a box”—an AI whose intelligence is driven by an explicit utility function and that humans hope to control coercively. Hence the discussion of ideas such as the AI-Box Experiment. A different interpretation, given in Karnofsky/​Tallinn 2011, is an AI with a carefully designed utility function—likely as difficult to construct as “Friendliness”—that leaves it “wishing” to answer questions helpfully. By contrast with both these ideas, Tool-AGI is not “trapped” and it is not Unfriendly or Friendly; it has no motivations and no driving utility function of any kind, just like Google Maps. It scores different possibilities and displays its conclusions in a transparent and user-friendly manner, as its instructions say to do; it does not have an overarching “want,” and so, as with the specialized AIs described above, while it may sometimes “misinterpret” a question (thereby scoring options poorly and ranking the wrong one #1) there is no reason to expect intentional trickery or manipulation when it comes to displaying its results.

I elaborated further on the distinction and on the concept of a tool-AI in Karnofsky/​Tallinn 2011.

1. While Holden’s post was probably not the first to discuss this kind of AI, it prompted many responses. Eliezer basically said that non-catastrophic tool AI doesn’t seem that easy to specify formally; that even if tool AI is best, agent-AI researchers are probably pretty useful to that problem; and that it’s not so bad of MIRI to not discuss tool AI more, since there are a bunch of things other people think are similarly obviously in need of discussion. Luke basically agreed with Eliezer. Stuart argues that having a tool clearly communicate possibilities is a hard problem, and talks about some other problems. Commenters say many things, including that only one AI needs to be agent-like to have a problem, and that it’s not clear what it means for a powerful optimizer to not have goals.

2. A problem often brought up with powerful AIs is that when tasked with communicating, they will try to deceive you into liking plans that will fulfil their goals. It seems to me that you can avoid such deception problems by using a tool which searches for a plan you could do that would produce a lot of paperclips, rather than a tool that searches for a string that it could say to you that would produce a lot of paperclips. A plan that produces many paperclips but sounds so bad that you won’t do it still does better than a persuasive lower-paperclip plan on the proposed metric. There is still a danger that you just won’t notice the perverse way in which the instructions suggested to you will be instantiated, but at least the plan won’t be designed to hide it.

3. Note that in computer science, an ‘agent’ means something other than ‘a machine with a goal’, though it seems they haven’t settled on exactly what [some example efforts (pdf)]. 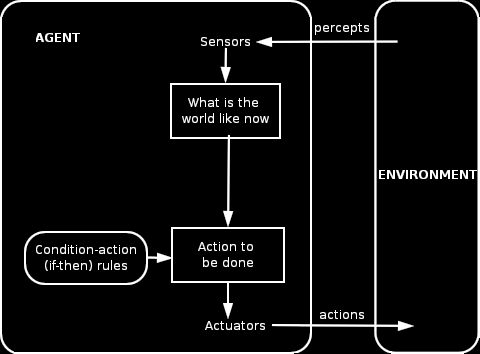 Figure: A ‘simple reflex agent’ is not goal directed (but kind of looks goal-directed: one in action)

4. Bostrom seems to assume that a powerful tool would be a search process. This is related to the idea that intelligence is an ‘optimization process’. But this is more of a definition than an empirical relationship between the kinds of technology we are thinking of as intelligent and the kinds of processes we think of as ‘searching’. Could there be things that merely contribute massively to the intelligence of a human—such that we would think of them as very intelligent tools—that naturally forward whatever goals the human has?

One can imagine a tool that is told what you are planning to do, and tries to describe the major consequences of it. This is a search or optimization process in the sense that it outputs something improbably apt from a large space of possible outputs, but that quality alone seems not enough to make something dangerous. For one thing, the machine is not selecting outputs for their effect on the world, but rather for their accuracy as descriptions. For another, the process being run may not be an actual ‘search’ in the sense of checking lots of things and finding one that does well on some criteria. It could for instance perform a complicated transformation on the incoming data and spit out the result.

5. One obvious problem with tools is that they maintain humans as a component in all goal-directed behavior. If humans are some combination of slow and rare compared to artificial intelligence, there may be strong pressure to automate all aspects of decisionmaking, i.e. use agents.

Next week, we will talk about multipolar scenarios—i.e. situations where a single AI doesn’t take over the world. To prepare, read “Of horses and men” from Chapter 11. The discussion will go live at 6pm Pacific time next Monday 5 January. Sign up to be notified here.