Crossposted at the Intelligent Agents Forum.

In simple graphical form, here is the problem of divergent human preferences: 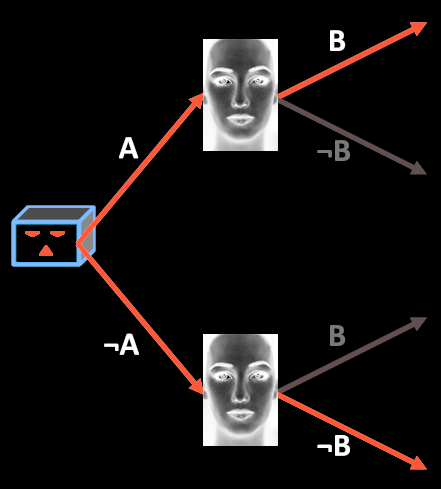 Here the AI either chooses A or ¬A, and as a consequence, the human then chooses B or ¬B.

There are a variety of situations in which this is or isn’t a problem (when A or B or their negations aren’t defined, take them to be the negative of what is define):

So, what are the differences? For the “not problems”, it makes sense to model the human as having a single reward R, variously “likes having a matching pair of shoes”, “needs a certain amount of fluids”, and “values certain purchases”. Then all that the the AI is doing is helping (or not) the human towards that goal.

As you move more towards the “problems”, notice that they seem to have two distinct human reward functions, RA and R¬A, and that the AI’s actions seem to choose which one the human will end up with. In the spirit of humans not being agents, this seems to be AI determining what values the human will come to possess.

Of course, you could always say that the human actually has reward R = IARA + (1-IA)R¬A, where IA is the indicator function as to whether the AI does action A or not.

However, from a learning and computational complexity point of view, it does make sense to distinguish “natural” R’s (where RA and R¬A are essentially the same, despite the human’s actions being different) from composite R’s.

This allows us to define:

Note that sometimes, RA = RA’ + R’ and R¬A = R¬A’ + R’: the two RA and R¬A overlap on a common piece R’, but diverge on RA’ and R¬A’. It makes sense to define this as a preference divergence point as well, if RA’and R¬A’ are “important” in the agent’s subsequent decisions. Importance being a somewhat hazy metric, which would, for instance, assess how much R’ reward the human would sacrifice to increase RA’ and R¬A’.

From the perspective of revealed preferences about the human, R(μ)=IARA + μ(1-IA) R¬A will predict the same behaviour for all scaling factors μ > 0.

Thus at a preference divergence point, the AI’s behaviour, if it was a R(μ) maximiser, would depend on the non-observed weighting between the two divergent preferences.

This is unsafe, especially if one of the divergent preferences is much easier to achieve a high value with than the other.

Thus preference divergence points are moments when the AI should turn explicitly to human meta-preferences to distinguish between them.

If these weights are sufficiently distinct, this could identify a meta-preference divergence point and hence a point where human meta-meta-preferences become relevant.