There have been various attempts to classify the problems in AI safety research. Our old Oracle paper that classified then-theoretical methods of control, to more recent classifications that grow out of modern more concrete problems.

These all serve their purpose, but I think a more enlightening classification of the AI safety problems is to look at what the issues we are trying to solve or avoid. And most of these issues are problems about humans.

And the central AI issue is:

Obviously if humans were agents and knew their own values and could predict whether a given AI would follow those values or not, there would be not problem. Conversely, if AIs were weak, then the human failings wouldn’t matter so much.

The points about human values is relatively straightforward, but what’s the problem with humans not being agents? Essentially, humans can be threatened, tricked, seduced, exhausted, drugged, modified, and so on, in order to act seemingly against our interests and values.

If humans were clearly defined agents, then what counts as a trick or a modification would be easy to define and exclude. But since this is not the case, we’re reduced to trying to figure out the extent to which something like a heroin injection is a valid way to influence human preferences. This makes both humans susceptible to manipulation, and human values hard to define.

How to classify methods and problems

That’s well and good, but how to various traditional AI methods or problems fit into this framework? This should give us an idea as to whether the framework is useful.

It seems to me that:

Putting this all in a table: 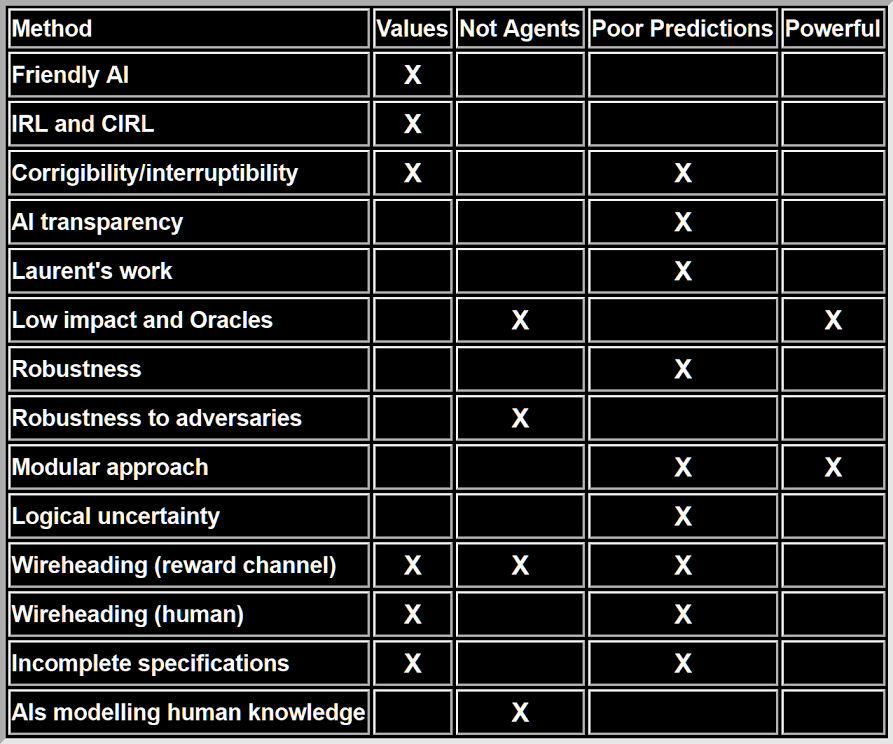 Further refinements of the framework

It seems to me that the third category—poor predictions—is the most likely to be expandable. For the moment, it just incorporates all our lack of understanding about how AIs would behave, but this might more useful to subdivide.