The Illusion of Ethical Progress

Here are two statements I used to believe.

What does it mean for an ethical system to get “better”? Physics contains no such thing.

To judge the quality of an ethical system you must do so through your own ethical system. Ethics are like Minkowski spacetime. You cannot judge ethics in absolute terms. You can only judge an ethical position relative to your own.

A universal standard of ethics must have practical utility in every society at every point in history. Today’s fashions often judge ethics by its internal coherence (untenable in traditional Japan[1]) or universality (untenable in tribal pastoralist cultures[2]).

If you believe your society (or somewhere nearby you in ideatic space) is the pinnacle of ethical evolution then what is more likely? 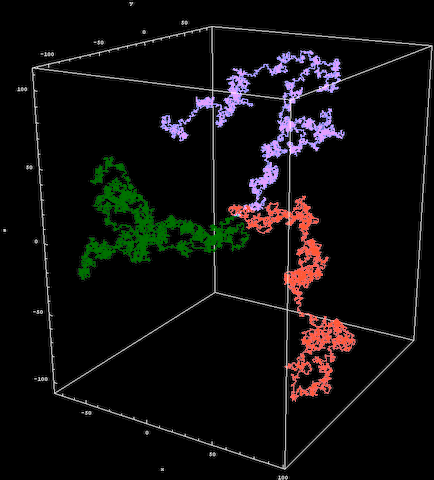 In the above picture you can see random walks through 3-dimensional space, representing 3 universes with 3 separate ethical evolutions. The higher the dimensionality of ethical space, the less likely an ethical system will walk back to a previous state and thus the more likely ethical evolution will appear to have a direction. Each 3-dimensional path appears to be going from one place to another even though they are all completely random. The more dimensions an ethical space has, the harder it is to distinguish a random walk from progress. Real ethical space has many more than 3 dimensions.

Does this mean ethics is fundamentally relative?

Ethics is fundamentally subjective, but not relative.

In the Western intellectual tradition, ethics is a branch of philosophy. Western philosophy has no place for empiricism. Without empirical results, there is no way to compare ethical systems objectively against each other. Progress is indistinguishable from a random walk.

But there is a way to observe ethics in absolute terms. It is called “mysticism”.

Have you ever noticed how Abraham, Jesus, Mohammad, Siddhartha and Ryokan all had a habit of going alone into the wilderness for several days at a time? Then they came back and made ethical pronouncements and people listened to them? The great mystics cut through the Gordian Knot of moral relativism by approaching ethics empirically.

In the early 1980′s Father Thomas Keating, a Catholic priest, sponsored a meeting of contemplatives from many different religions. The group represented a few Christian denominations as well as Zen, Tibetan, Islam, Judaism, Native American & Nonaligned. They found the meeting very productive and decided to have annual meetings. Each year they have a meeting at a monastery of a different tradition, and share the daily practice of that tradition as a part of the meetings. The purpose of the meetings was to establish what common understandings they-had achieved as a result of their diverse practices. The group has become known as the Snowmass Contemplative Group because the first of these meetings was held in the Trappist monastery in Snowmass, Colorado.

When scholars from different religious traditions meet, they argue endlessly about their different beliefs. When contemplatives from different religious traditions meet, they celebrate their common understandings. Because of their direct personal understanding, they were able to comprehend experiences which in words are described in many different ways. The Snowmass Contemplative Group has established seven Points of Agreement that they have been refining over the years:

You cannot “judge” an ethical system objectively. But you can observe it objectively and you can measure it objectively. Such empiricism once formed the foundation for the Age of Reason. Mystics are less like moral philosophers arguing doctrine than they are scientists reconciling separate experiments.