This is an old post cross-posted from my personal blog. I thought it might be helpful to some people here, enjoy!

Yesterday, I had a very interesting conversation with a person that was concerned about being evil. I helped out the best I could by giving some philosophical feedback/​grounding, noting when things went too propositional/​judgy etc. It was great fun.

This got me into sharing-mental-tools mode. This text is about one of my favourites.
I haven’t named it yet, but now that I’m to talk about it in public I’ll have to come up with a name...

Let’s talk about “The Echo Principle”

Disclaimer: This is not based on rigorous studies, so take this with a pinch of salt. Feel free to try it out and get back to me with any results. (even null results please)

I discovered the echo principle a few years ago. I was doing inner work, exploring the following questions:

Why do I hold myself to high standards, being harsh on myself?

Why do I judge other people for not living up to the criteria I set?

Why am I afraid of opening up to other people?

Then I realized that all of these questions point to ideas and ways of being that are symmetrical “echoes” of each other! Translated more simply:

I am critical of myself.

I am critical of others.

I am afraid that others are critical of me.

I filed away the echo-symmetry concept where I put all of my other insights/​ideas. Nothing really stood out, so I basically put it on hold.

A few months later, I was cooking & eating dinner with a friend. My friend asked me if she could +1 invite one more guest (an acquaintance of mine). I happily agreed. The acquaintance arrived late, with tears in their eyes. Worried, we asked them what had happened. Here’s what they shared:

“When I got the invitation, I was happy at first. But then doubt and unease crept in. I thought to myself ’What if they invite me out of courtesy, but don’t really feel like hanging out?´
I don’t want to impose!“

We did some emergency emotional support, cheering them up and assuring them that it was ok. Then, after asking for consent, I went psycho-analysing!

“Aha!” I thought to myself, picturing this:

Then I added one simple symmetry, getting this

Me: “Do you have a tendency to invite people out of obligation?”

Acquaintance: “Yes! I do that often and it’s very stressful. I tell myself that I need to be careful to not impose on others.”

“Aha!” I thought to myself, picturing this: 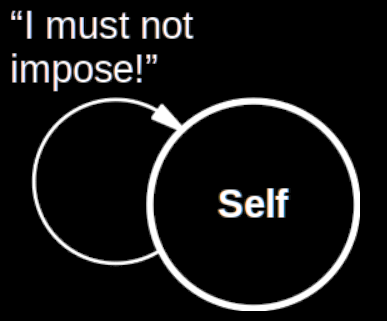 Then I added a simple symmetry, picturing this:

Me: “Do you think other people are afraid of imposing too?”

Acquaintance: “Yes! That’s why I have a hard time saying ‘no’ to people: they are already afraid of imposing. If I told them that they are imposing for real, that would make it worse!”

“Aha!” I thought to myself, picturing these symmetrical co-reinforcing habitual thought patterns:

Note: This was well-received, but it feels weird to paraphrase dialogue praising myself. Fill it in using your imagination.

Note: These symmetries are a guide to aid your search for patterns.
Sometimes only some of these patterns are there, sometimes none are.

Symmetry 1: “I expect others to treat themselves the same way I treat myself”

Symmetry 2: “I expect others to treat me as I treat them”

Symmetry 3: “I treat myself the same way I treat others”

Symmetry 4: “I expect others to treat me as I treat myself”

Let’s bump up the speculation!

Thus far, I’ve been in descriptive territory, explaining the “what” while avoiding the “why”. But seeing as I’m a human being that loves getting some kind of coherence in the story I tell myself about the world, I’ll end with an attempt at an explanation of these symmetries. Avoid reading if you don’t want layman speculations:

update 2022-11-16: imagine my surprise when I read surfing uncertainty and learned that predictive processing research backs up the paragraph below. At least as far as I can understand it.

Human cognition is lazy. When we mentalize others, we don’t create a replica of them in our mental processes. Instead, we put ourselves “in their shoes”, using our own cognition as a stand-in for the person we try to mentalize.[1]

This explains symmetries 1 & 2 & 4, as well as phenomena such as culture clashes.

For symmetry 3 (“I treat myself the same way I treat others”), I don’t have a straightforward explanation. I think it has to do with reinforcing certain habits in the way you treat people in general (yourself included). “The individual” is a very popular concept in the modern era, but I’m not sure our subconscious patterns are on board with the strict delineation.

Also, there are studies hinting that we mentally don’t really identify with our future selves, indicating that there are some aspects of the concept of “the individual” that are clearly not paralleled in cognition.

Edit: I realized when I woke up that symmetry 4 ( “I expect others to treat me as I treat myself”) was an obvious symmetry I’d missed writing in. There might be other symmetries I’ve missed as well.