Autism And Intelligence: Much More Than You Wanted To Know

[Thanks to Marco G for proofreading and offering suggestions]

Several studies have shown a genetic link between autism and intelligence; genes that contribute to autism risk also contribute to high IQ. But studies show autistic people generally have lower intelligence than neurotypical controls, often much lower. What is going on?

The relatives of autistic people will usually have many of the genes for autism, but not be autistic themselves. If genes for autism (without autism itself) increase intelligence, we should expect these people to be unusually smart. This is what we find; see Table 4 here. Of 11 types of psychiatric condition, only autism was associated with increased intelligence among relatives. This intelligence is shifted towards technical subjects. About 13% of autistic children have fathers who are engineers, compared to only 5% of a group of control children (though see the discussion here) for some debate over how seriously to take this; I am less sure this is accurate than most of the other statistics mentioned here).

Further (indirect) confirmation of the autism-IQ link comes from evolutionary investigations. If autism makes people less likely to reproduce, why would autism risk genes stick around in the human population? Polimanti and Gelemter (2017) find that autism risk genes aren’t just sticking around. They are being positively selected, ie increasing with every generation, presumably because people with the genes are having more children than people without them. This means autism risk genes must be doing something good. Like everyone else, they find autism risk genes are positively correlated with years of schooling completed, college completion, and IQ. They propose that the reason evolution favors autism genes is that they generally increase intelligence.

These numbers should be taken with very many grains of salt. First, IQ tests don’t do a great job of measuring autistic people. Their intelligence tends to be more imbalanced than neurotypicals’, so IQ tests (which rely on an assumption that most forms of intelligence are correlated) are less applicable. Second, even if the test itself is good, autistic people may be bad at test-taking for other reasons – for example, they don’t understand the directions, or they’re anxious about the social interaction required to answer an examiner’s quetsions. Third, and most important, there is a strong selection bias in the samples of autistic people. Many definitions of autism center around forms of poor functioning which are correlated with low intelligence. Even if the definition is good, people who function poorly are more likely to seek out (or be coerced into) psychiatric treatment, and so are more likely to be identified. In some sense, all “autism has such-and-such characteristics” studies are studying the way people like to define autism, and tell us nothing about any underlying disease process. I talk more about this in parts 2 and 3 here.

But even adjusting for these factors, the autism – low intelligence correlation seems too strong to dismiss. For one thing, the same studies that found that relatives of autistic patients had higher IQs find that the autistic patients themselves have much lower ones. The existence of a well-defined subset of low IQ people whose relatives have higher-than-predicted IQs is a surprising finding that cuts through the measurement difficulties and suggests that this is a real phenomenon.

So what is going on here?

At least part of the story is that there are at least three different causes of autism.

1. The “familial” genes mentioned above: common genes that increase IQ and that evolution positively selects for.

2. Rare “de novo mutations”, ie the autistic child gets a new mutation that their non-autistic parent doesn’t have. These mutations are often very bad, and are quickly selected out of the gene pool (because the people who have them don’t reproduce). But “quickly selected out of the gene pool” doesn’t help the individual person who got one of them, who tends to end up severely disabled. In a few cases, the parent gets the de novo mutation, but for whatever reason doesn’t develop autism, and then passes it onto their child, who does develop autism.

3. Non-genetic factors. The best-studied are probably obstetric complications, eg a baby gets stuck in the birth canal and can’t breathe for a long time. Pollution, infection, and trauma might also be in this basket.

These three buckets and a few other less important factors combine to determine autism risk for any individual. Combining information from a wide variety of studies, Gaugler et al estimate that about 52% of autism risk is attributable to ordinary “familial” genes, 3% to rare “de novo” mutations, 4% to complicated non-additive genetic interaction effects, and 41% “unaccounted”, which may be non-genetic factors or genetic factors we don’t understand and can’t measure. This study finds lower heritability than the usual estimates (which are around 80% to 90%; the authors are embarrassed by this, and in a later study suggest they might just have been bad at determining who in their sample did or didn’t have autism. While their exact numbers are doubtful, I think the overall finding that common familial genes are much more important than rare de novo mutations survives and is important.

Most cases of autism involve all three of these factors; that is, your overall autisticness is a combination of your familial genes, mutations, and environmental risk factors.

One way of resolving the autism-intelligence paradox is to say that familial genes for autism increase IQ, but de novo mutations and environmental insults decrease IQ. This is common-sensically true and matches previous research into all of these factors. So the only question is whether the size of the effect is enough to fully explain the data – or whether, even after adjusting out the degree to which autism is caused by mutations and environment, it still decreases IQ. 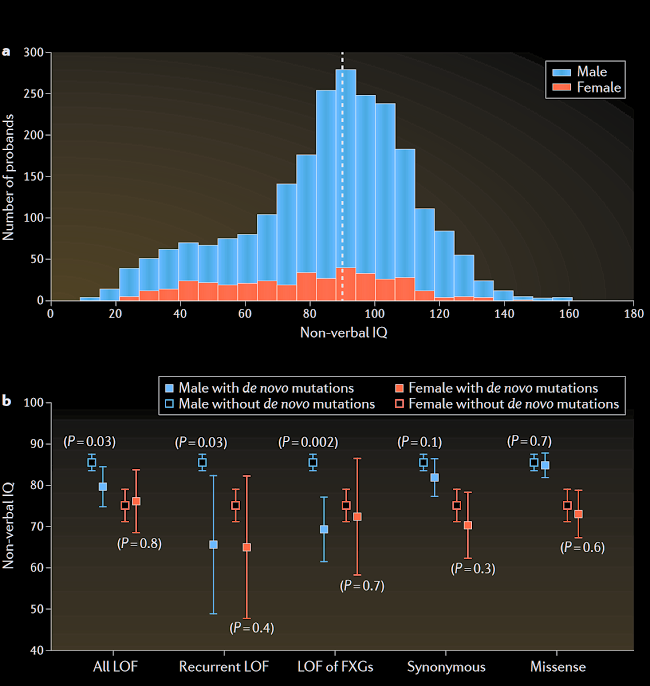 Here’s another set of relevant graphs: 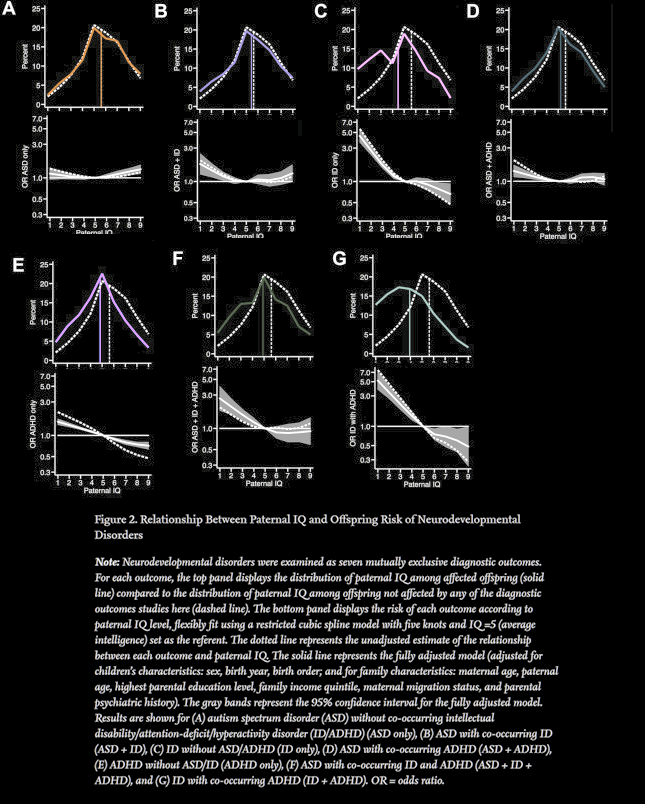 This one comes from Gardner et al (2019), which measures the cognitive ability of the fathers of autistic people and disaggregates those with and without intellectual disability. In Graph A, we see that if a child has autism (but not intellectual disability), their likelihood of having a father with any particular IQ (orange line) is almost the same as the likelihood of a neurotypical child having a father of that IQ (dotted line). Disguised in that “almost” is a very slight tendency for fathers to be unusually intelligent, plus a (statistically insignificant) tendency for them to be unusually unintelligent. For reasons that don’t entirely make sense to me, if instead we look at the likelihood of the father to be a certain intelligence (bottom graph, where dark line surrounded by gray confidence cloud is autistic people’s fathers, and dotted line is neurotypical people’s fathers) it becomes more obvious that more intelligent people are actually a little more likely to have autistic children (though less intelligent people are also more likely.

(remember that “intellectual disability” just means “IQ over 70”, and so many of these not-intellectually-disabled people may be very intellectually weak – I wish the paper had quantified this)

Graph B is the same thing, but with people have have autism with intellectual disability. Now there is a very strong effect towards their fathers being less intelligent than usual.

This confuses me a little. But for me the key point is that high-intelligence fathers show a trend (albeit not significant in this study) to be more likely than average to have children with autism and intellectual disability.

These questions interest me because I know a lot of people who are bright nerdy programmers married to other bright nerdy programmers, and sometimes they ask me if their children are at higher risk for autism. While their children are clearly at higher risk for autistic traits, I think they want to know whether they have higher risk for the most severe forms of the syndrome, including intellectual disability and poor functioning. If we take the Ronemus and Gardner studies seriously, the answer seems to be yes. The Gardner study seems to suggest it’s a very weakly elevated risk, maybe only 1.1x or 1.2x relative risk. But the Gardner study also ceilings off at 90th percentile intelligence, so at this point I’m not sure what to tell these people.

If Ronemus isn’t missing some obscure de novo mutations, then people who get autism solely by accumulation of common (usually IQ-promoting) variants still end up less intelligent than average. This should be surprising; why would too many intelligence-promoting variants cause a syndrome marked by low intelligence? And how come it’s so inconsistent, and many people have naturally high intelligence but aren’t autistic at all?

It doesn’t really present much evidence for this other than that autistic people seem to have high perceptual intelligence. Also, it doesn’t really look like autistic people are worse at mental rotation. Also, the Gardner paper has analyzed autistic patients’ fathers by subtype of intelligence, and there is a nonsignificant but pretty suggestive tendency for them to have higher-than-normal verbal intelligence; certainly no signs of high verbal intelligence preventing autism. I can’t tell if this is evidence against Crespi or whether since all intellectual abilities are correlated this is just the shadow of their high perceptual intelligence, and if we directly looked at perceptual-to-verbal ratio we would see it was lower than expected. Also also, Crespi is one of those scientists who constantly has much more interesting theories than anyone else (eg), and this makes me suspicious.

Overall I would be surprised if this were the real explanation for the autism-and-intelligence paradox, but it gets an A for effort.

3. Some of this effect is because autism is caused both by normal genes and by de novo mutations and environmental insults, and the de novo mutations and environmental insults definitely decrease intelligence. Every autism case is caused by some combination of these three factors, and the more it is caused by normal genes, the more intelligence is likely to be preserved (~100% confidence)

4. This is not the whole story, and even cases of autism that are caused entirely or mostly by normal genetics are associated with unusually low IQ (80% confidence)

5. This can best be understood through a tower-versus-foundation model where higher intelligence that outstrips the ability of some mysterious foundation to support it will result in autism (25% confidence)

6. The specific way the model plays out may be through perceptual intelligence out of balance with verbal and rotational intelligence causing autism (3% confidence)