Turning Some Inconsistent Preferences into Consistent Ones

This is still a draft that I was told to already post here, which includes working (but very slow) code for one special case. Hopefully I’ll be able to expand on this in the next ~half year.

Representing inconsistent preferences with specific mathematical structures can clarify thoughts about how to make those preferences consistent while only minimally changing them. This is discussed in the case of preferences over world states, represented by directed graphs; and preferences over lotteries of world states, represented either by infinitely dense graphs, (in some cases) vector fields over probability simplices, or edge-weighted directed graphs. I also present an algorithm for the discrete case based on the graph edit distance. Implications for scenarios such as ontological shifts are discussed.

Turning Some Inconsistent Preferences into Consistent Ones

A kind of God-made (or evolution-created) fairness between species is also unexpectedly found.

Random testing is simple in concept, often easy to implement, has been demonstrated to effectively detect failures, is good at exercising systems in unexpected ways (which may not occur to a human tester), and may be the only practical choice when the source code and the specifications are unavailable or incomplete.

Consider an agent which displays (von Neumman-Morgenstern) inconsistent preferences, for example choosing two incompatible options in the two scenarios in the Allais paradox, or reliably displaying cycles in its actions (detecting which actions are in fact caused by inconsistent preferences, and not just exotic ones from weird abstractions, is considered a separate problem here). We might want to interact with that agent, e.g. trade with it, help it (or exploit it), or generally know how it will act But how to go about that if the agent displays inconsistent preferences? Perhaps it might even be the case that humans are such agents, and find ourselves in a conundrum: we know our preferences are inconsistent and reliably exploitable, and that agents with such preferences reliably fare worse in the world, we might want to change that.

A possible approach to this problem has two steps:

Mathematical Formulation of the Problem

Formally, we want to find for some given distance metric d:⋎/×⋎↦R a function t so that

I call this function a turner, and sometimes call the results of that function the set of turnings (an element from that set is a turning). The names mostly chosen for not having been used yet in mathematics, as far as I know, and because I want to be a little extra.

A solution to the problem of turning inconsistent preferences into consistent ones then has these components:

This work is closely related to the investigations in Aird & Shovelain 2020 (so closely that even though I believe I re-invented the approach independently, it might just be that I had read their work & simply forgotten it), and broadly related to the value extrapolation framework outlined in Armstrong 2022.

When we have discrete sets of worlds W, we can represent an inconsistent preference over those worlds by using a directed graph G≿=(W,E≿⊆W×W). The presence of an edge (w1,w2) would mean that w1≿w2, that is w1 is preferred to w2.

The consistent equivalent to an inconsistent preference represented by a directed graph would be a path graph G⪰=(V,E⪰) over the same set of vertices W. The method for transforming G≿ into G⪰ would be by adding/​deleting the minimal number of vertices from E≿.

Mathematically, then ⋎ is the set of transitive closures of all possible path graphs that are encode permutations of W; ⋎={(V,E)+|E∈σ(W)}.

An edge from a to b means that a is preferred to b (short a≿b). The absence of an edge between two options means that those two options are, from the view of the agent, incomparable.

It violates the two von Neumann-Morgenstern axioms for discrete options:

A possible turned version of these preferences could then be the following graph: 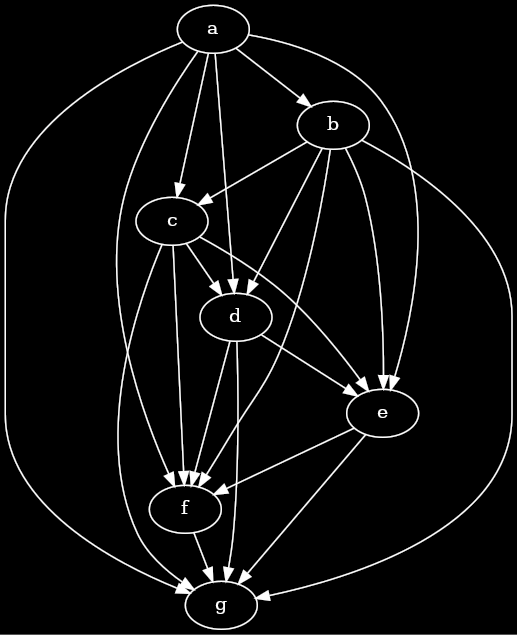 This graph looks quite messy, but it’s really just the transitive closure of this graph:

Whether this is the “right” way to turn the previous inconsistent preferences depends on the choice of distance metric we would like to use.

Luckily, there is a concept in computer science called the graph-edit distance: a measure for the difference between two graphs.

The set of possible editing operations on the graph varies, e.g. Wikipedia lists

Since we do not have labels on the edges of the graph, and have disallowed the deletion or insertion of vertices, this leaves us with the graph edit distance that uses edge insertion and edge deletion.

We can then write a simple pseudocode algorithm for ⪰=f(≿):

where perm(W) is the set of permutations on W, trans_closure(G) is the transitive closure of a graph G, and ged(G1, G2) is the graph edit distance from G1 to G2.

Implementing this in Python 3 using the networkx library turns out to be easy:

We can then test the function, first with a graph with a known best completion, and then with our example from above.

The small example graph (top left) and its possible turnings are (all others): 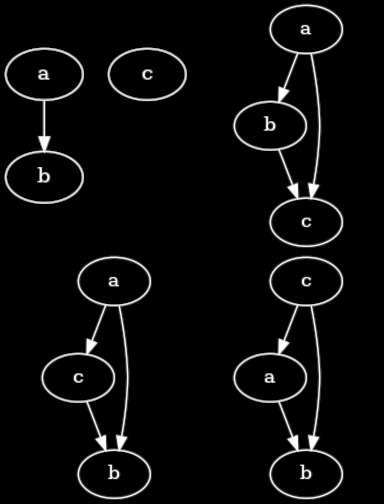 This looks pretty much correct.

This is actually equal to the hypothesized solution from above (below is the non-transitive-closure version):

Problems with This Method and its Algorithm

This solution has some glaring problems.

Speed (or the Lack Thereof)

Some of you might have noticed that this algorithm is somewhat inefficient (by which I mean absolutely infeasible).

Since we iterate through the permutations of W, the runtime is O(|W|!) (with the added “benefit” of additionally computing the NP-complete graph edit distance inside of the loop, which is also APX-hard to approximate).

Possible better approaches would involve finding the longest subgraph that is a path graph, or the spanning tree, perhaps the transitive reduction is helpful, or maybe the feedback arc set?

Another, smaller problem is that the algorithm often doesn’t have a unique result, as seen in the small example above.

We can compute the set of all possible turnings with some trivial changes to the algorithm:

The results, with the small example, are as expected:

For the big example, after waiting a while for the solution:

I will not list them all, but these are less than the 7!=5040 possible options.

We can further define the set of all graphs wwith n nodes with m turnings as Tn,m={G∈Gn|m=|turn_all(G)|} (of which Un=Tn,1 is just a special case).

We can call the size of the set of all turnings of a graph the confusion of that graph/​set of inconsistent preferences: If the graph is already the transitive closure of a path graph, the size of that set is (arguendo) 1: there are no other possible turnings. If the graph contains no edges (with n nodes), the confusion is maximal with n!, the preferences carry the minimal amount of meaning.

Minimal and Maximal Number of Turnings

The minimal number of turnings a graph can have is 1, with a graph-edit distance of 0: any transitive closure of a path graph satisfies this criterion (if your preferences are already consistent, why change them to be more consistent?)

However, those graphs aren’t the only graphs with exactly one turning, consider the following graph (left) and a possible turning (right) (with graph-edit distance 1; the changed edge is red, a nice opportunity for some rubrication): 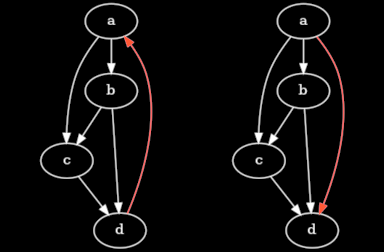 One can easily see that it has exactly one turning, and checking with the code confirms:

We can prove this inductively: When considering a node-labeled graph with n nodes and no edges, the graph edit distance to any path graph variant of that graph is the same, because we always have to add n−1+n−2+n−3…1=n−1+(n−1)22 edges to reach any transitive closure of a path graph (by the sum of any arithmetic progression). Let not G∘ be a graph with n nodes that is solely the union of complete digraphs with disjoint nodes. When we now pick two nodes u and v from G∘ and add the edges {(u,v),(v,u)}∪{(v,x)|(u,x)∈E∘}∪{(u,y)|(v,x)∈E∘}}∪{(x,y)|(u,x)∈E∘,(v,y)∈E∘} (that is, we connect u and v, and all their neighbors) to G∘, we have necessarily increased the graph-edit distance to any path graph by the same amount, we have symmetrically added edge-pairs that need to be broken in either direction.

Number of Turnings for Gn

We can check these empirically! While it would be nice to prove anything about them, it’s much nicer to investigate them computationally. This is pretty straightforward: For increasing n, generate Gn, for every G∈Gn, compute |turn_all(G)|, save the data in a file somewhere, and do interesting things with that data.

In code, we first generate all directed graphs with n nodes with a recursive function

However, my computer quickly freezes and I find out that this is a lot of graphs:

So the number directed graphs with 5 nodes would be 232=4294967296, far too many for my puny laptop. But instead of generating them all, one can just generate a random sample and test on that, using the Erdős–Rényi model, for which networkx has the helpful function generators.random_graphs.gnp_random_graph (Wikipedia informs us that “In particular, the case p=12 corresponds to the case where all 2(n2) graphs on n vertices are chosen with equal probability.”). We have to randomly add reflexive edges (not included in the model, it seems) with probability 12 each, and labels for the nodes, and then we’re good to go:

We now run the script in the background, happily collecting data for us (python3 collect.py >.https://​​niplav.github.io/​​../​​data/​​turnings.csv &), and after a nice round of editing this text go back and try to make sense of the data, which runs squarely counter my expectations:

It seems like the mean number of turnings actually increases with the graph size! Surprising. I’m also interested in the exact numbers: Why exactly 3.390289… for the graphs with 4 nodes? What is so special about that number‽ (Except it being the longitude of the Cathedral Church of Christ in Lagos).

Very much to my surprise, searching for “2,2,46,3640” in the OEIS yields no results, even though the sequence really looks like something that would already exist! (I think it has a specifically graph-theoretic “feel” to it). But apparently not so, I will submit it soon.

Assuming that we have a set of axioms that describe which preferences are consistent and which are inconsistent, for the purposes of this text, we want to ideally find a set ⋎/ of mathematical structures that

Incompleteness (or incomparability) between two options w1,w2 can be represented by not specifying an edge between the two options, that is (w1,w2)∉E,(w2,w1)∉E. 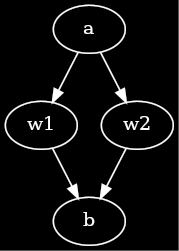 Intransitivity can be represented by cycles in the graph: 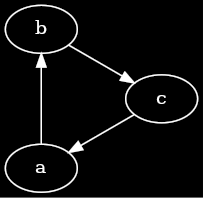 Curl in the vector field?

Can only exist with incompleteness?

This leads to an interesting ethical consideration: is it a larger change to a preference relation to add new information or remove information?

It is discussed how to incorporate those weights into an algorithm for minimally transforming G≿ into G⪰.

Vector field over the probability simplex over the options (representing local preferences over lotteries).

Find mapping from vector field to another that makes the vector field consistent by minimizing the amount of turning/​shrinking the vectors have to perform.

Learn human values, check if known inconsistencies are encoded (to ensure learning at the correct level of abstraction), then make consistent.

Furthermore, there remain difficult philosophical problems. We have made a distinction between the agent’s uncertainty about which model is correct and the agent’s uncertainty about which state the world is in within the model. We may wish to eliminate this distinction; we could specify a single model, but only give utilities for some states of the model. We would then like the agent to generalize this utility function to the entire state space of the model.

If you know a mapping between objects from human to AI ontology, you could find the mapping from the (consistent) human probability simplex to the AI simplex?

A node splits in two or more, or two or more nodes get merged. If the then resulting graph isn’t a path graph, it can be turned with the method described above.

Thanks to Miranda Dixon-Luinenburg for finding some typos.