(If you’re familiar with the backstory of the LWSH, you can skip to paragraph 5. If you just want the link to the chat, click here: LWSH on Complice)

The Less Wrong Study Hall was created as a tinychat room in March 2013, following Mqrius and ShannonFriedman’s desire to create a virtual context for productivity. In retrospect, I think it’s hilarious that a bunch of the comments ended up being a discussion of whether LW had the numbers to get a room that consistently had someone in it. The funny part is that they were based around the assumption that people would spend about 1h/​day in it.

Once it was created, it was so effective that people started spending their entire day doing pomodoros (with 32minsWork+8minsBreak) in the LWSH and now often even stay logged in while doing chores away from their computers, just for cadence of focus and the sense of company. So there’s almost always someone there, and often 5-10 people.

A week in, a call was put out for volunteers to program a replacement for the much-maligned tinychat. As it turns out though, video chat is a hard problem.

So nearly 2 years later, people are still using the tinychat.

But a few weeks ago, I discovered that you can embed the tinychat applet into an arbitrary page. I immediately set out to integrate LWSH into Complice, the productivity app I’ve been building for over a year, which counts many rationalists among its alpha & beta users.

The focal point of Complice is its today page, which consists of a list of everything you’re planning to accomplish that day, colorized by goal. Plus a pomodoro timer. My habit for a long time has been to have this open next to LWSH. So what I basically did was integrate these two pages. On the left, you have a list of your own tasks. On the right, a list of other users in the room, with whatever task they’re doing next. Then below all of that, the chatroom. 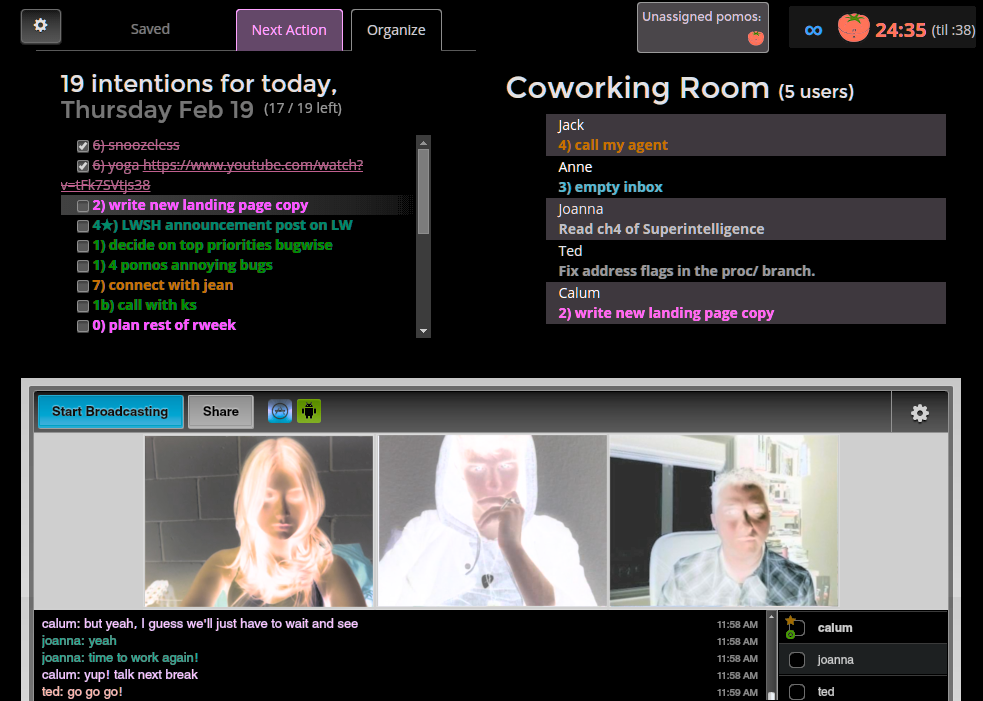 (Something important to note: I’m not planning to point existing Complice users, who may not be LWers, at the LW Study Hall. Any Complice user can create their own coworking room by going to complice.co/​createroom)

With this integration, I’ve solved many of the core problems that people wanted addressed for the study hall:

There are a couple other requested features that I can definitely solve but decided could come after this launch:

The following points were brought up in the Programming the LW Study Hall post or on the List of desired features on the github/​nnmm/​lwsh wiki, but can’t be fixed without replacing tinychat:

It’s also worth noting that if you were to think of the entirety of Complice as an addition to LWSH… well, it would definitely look like feature creep, but at any rate there would be several other notable improvements:

So, if you haven’t clicked the link already, check out: complice.co/​room/​lesswrong

(This article posted to Main because that’s where the rest of the LWSH posts are, and this represents a substantial update.)