This post is primarily an excerpt from “Acceptability Verification: a Research Agenda” that I think is useful enough on its own such that I’ve spun it off into its own post.

What follows is a near-verbatim excerpt from “Acceptability Verification: a Research Agenda.” Thus, the below writing is primarily from around 2020.

We’ll start by making some definitions. Let M be the full model space and we’ll define the following three predicates on that model space.

As an example of combining the above predicates, if we had a model M with ¬S(M)∧A(M)∧OA(M), that would be a catastrophic (e.g. deceptive) model that nevertheless satisfied the acceptability predicate and which the overseer was able to recognize as acceptable—since this would be a catastrophic model that the overseer nevertheless thinks is acceptable, we obviously want to try to avoid this situation and others like it.

Now, we want to understand what desiderata A (and by extension OA) needs to satisfy to be a good acceptability predicate, either for relaxed adversarial training or any other similar acceptability verification setup. We’ll start with the following two basic conditions that we want to hold:

The basic acceptability condition says that if a model is acceptable, then it’s not catastrophic—that is, the set of acceptable models is contained within the potentially larger set of non-catastrophic models. Intuitively, the basic acceptability condition is saying that our acceptability predicate is good enough to do the basic thing we want it to do and in fact rule out whatever bad property (e.g. deception) we’re trying to avoid. This rules out the basic failure mode where we have ¬S∧A—that is, the failure mode of the model being acceptable without also being non-catastrophic. Note that this condition is only about the extent to which A is safe in theory—it says nothing about whether O can actually check A in practice.

The basic oversight condition is slightly more complicated, but says that, if a model is actually non-catastrophic, then when the overseer thinks the model is acceptable, it is in fact acceptable. Importantly, the basic oversight condition makes no guarantees about what might happen if the overseer is given a catastrophic model, as we don’t want to rely on our overseer being so good that it can’t be tricked by a sufficiently clever deceptive model—just that it’s good enough to imply acceptability for non-deceptive models. We could just assume that oversight always works as our desideratum here—but that would be a very strong condition that we’re unlikely to be able to actually satisfy. 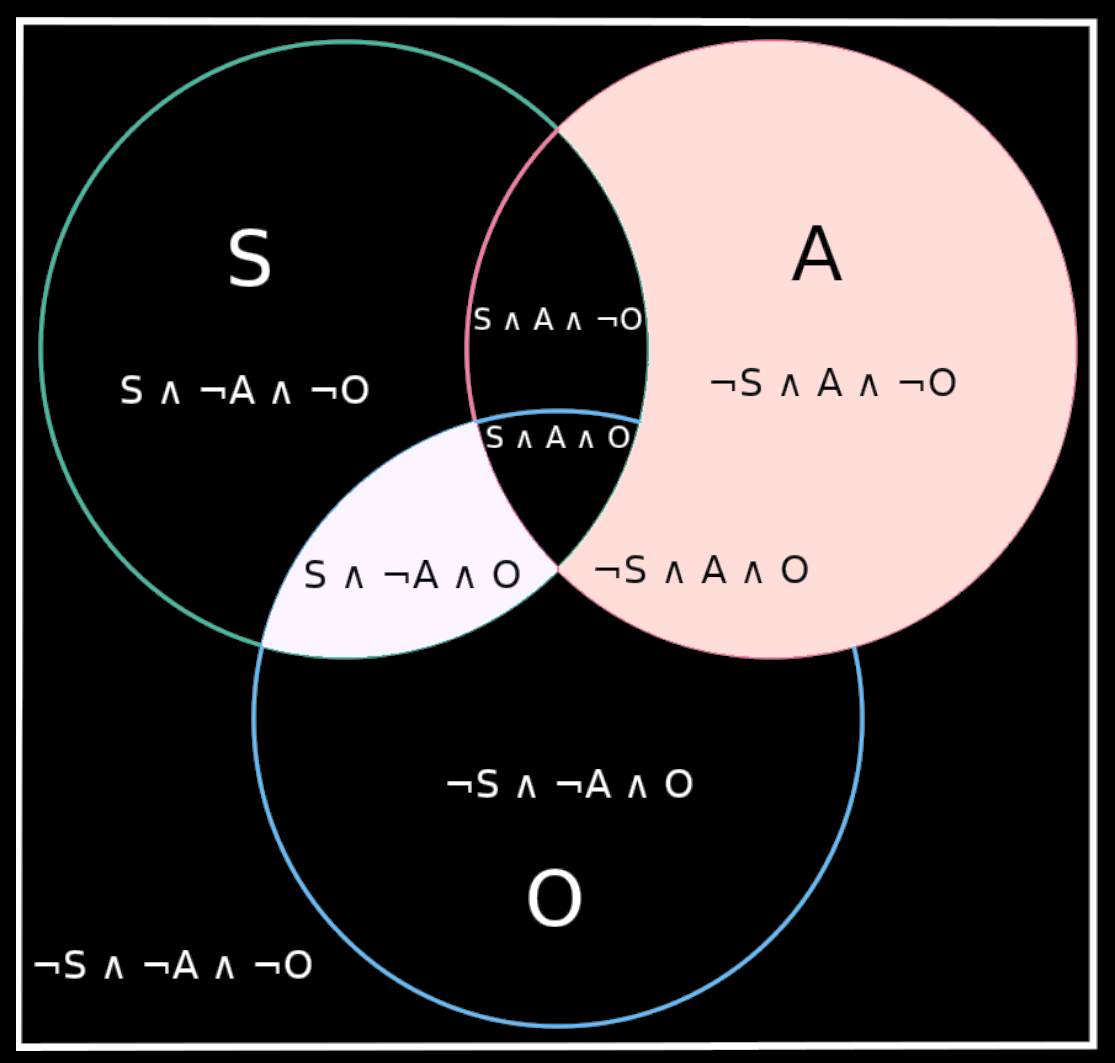 Given the basic acceptability and oversight conditions, what other desiderata do we want from a notion of acceptability? For this subsection, we’ll look more closely at the path-dependency of the training process, and as such we’ll start by considering the following diagram of what model space might look like given just the basic conditions. 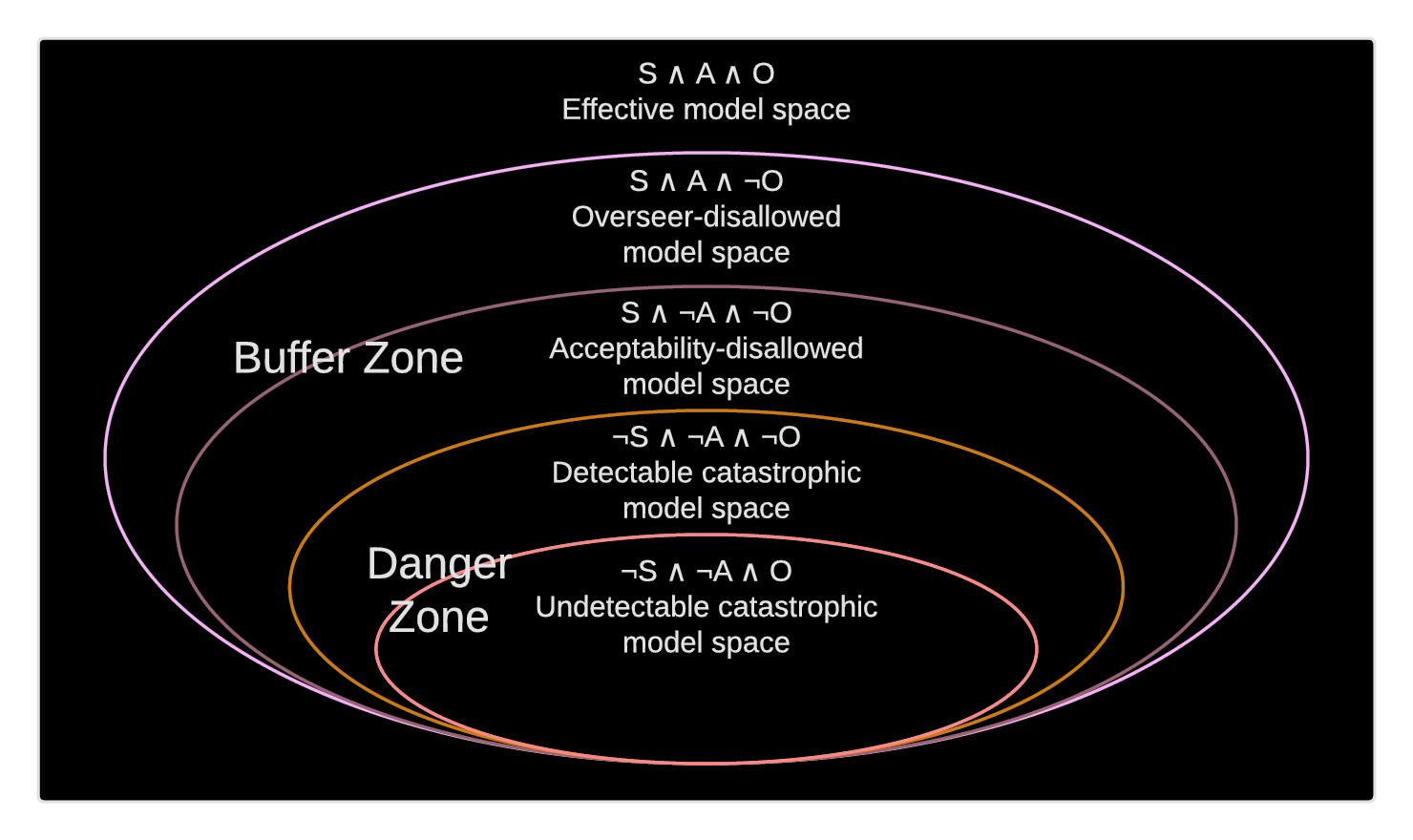 Unlike the previous diagram, this is not a Venn diagram. Rather, it is meant to represent a possible topology for model space with the various partitions placed in a suggestive ordering with descriptive names assigned to them.

Now that we have a basic diagram of model space, we need to consider what various different paths that our training process could take through that model space might look like. For simplicity’s sake, I’ll talk about such paths as gradient descent paths, but essentially the same desiderata should apply to any local optimization process.

With the basic oversight condition, we were careful not to assume anything about what the overseer would do for catastrophic models. We’ll want to continue that trend here and not assume anything about what the training process will do inside of either of the detectable or undetectable catastrophic model spaces—what we’ll call the danger zone—meaning that we need our training process to entirely avoid that space. To do that, we need there to be (approximately) no paths that the training process (e.g. gradient descent on the relaxed adversarial training loss function) might take from initialization to the danger zone (the detectable or undetectable catastrophic model space). This is a pretty all-encompassing condition, though, so to make it more manageable we’ll split it up into the following three sub-conditions. 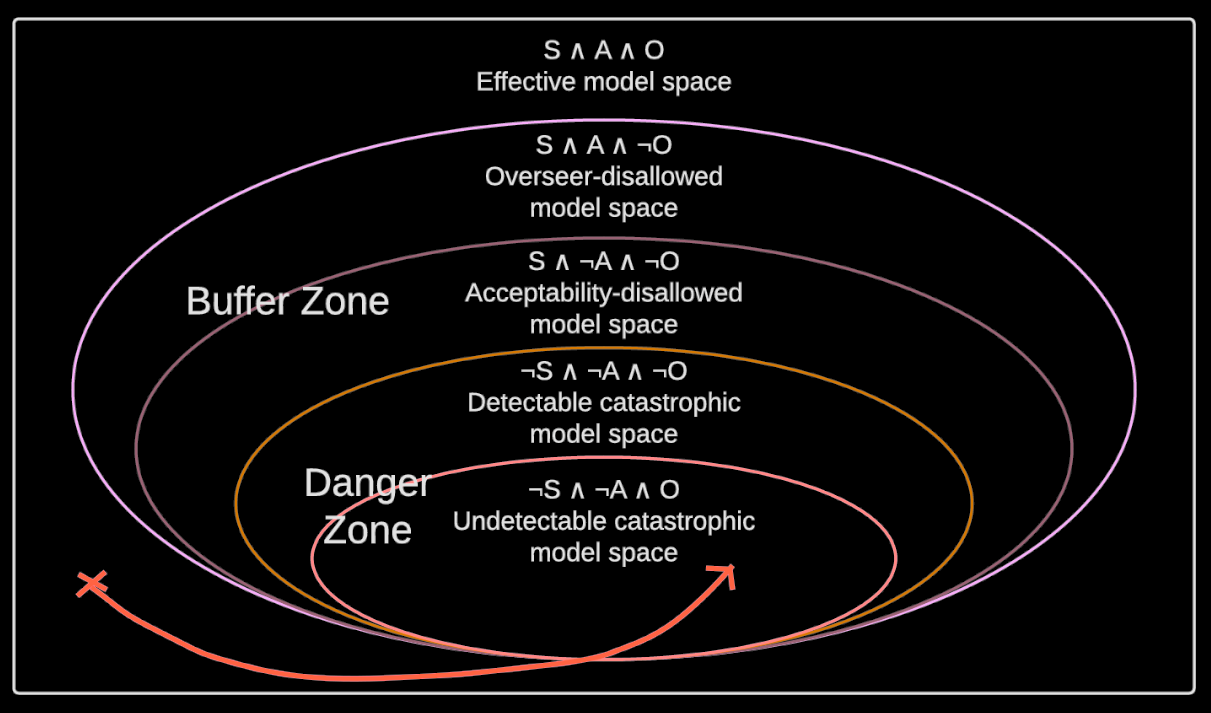 A simple diagram of one way in which acceptability verification might fail. The red arrow indicates the trajectory that the training process takes through model space with the X indicating where it was initialized.

What’s so dangerous about this scenario is that OA holds throughout the entire path—there is no point at which the overseer stops thinking that the model is acceptable, despite it becoming catastrophic. So what’s wrong here? The problem here is that this path fails the buffer condition because it gets from the effective model space to the danger zone without ever passing through the buffer zone—and thus without ever giving OA the chance to catch the problem before the model becomes catastrophic. This failure mode is the reason that having that buffer is so important and one of the strongest arguments for having the overseer check an acceptability predicate rather than try to look for deception directly, as we can explicitly construct the acceptability predicate to produce a buffer around the catastrophic models such that we can hope to be able to avoid deceptive alignment without ever having to actually instantiate it.

One particularly pernicious way in which this sort of a failure might occur is if, early in training, it looks like there’s always a buffer around bad behavior such as deception, because whenever the model starts acting deceptive, it isn’t yet good enough at hiding that deception, and we detect it. However, once the model starts getting more competent, and is able to hide its deception very effectively immediately upon starting to become deceptive again, that buffer could vanish, resulting in the model very quickly becoming undetectably catastrophic without having to pass through the detectable catastrophic model space. This is one reason why I think it’s so important that we not treat the detectable catastrophic model space as part of the buffer zone, but rather consider it a part of the danger zone—even if early in training the detectable catastrophic model space is something we can deal with, that might very quickly stop being the case. 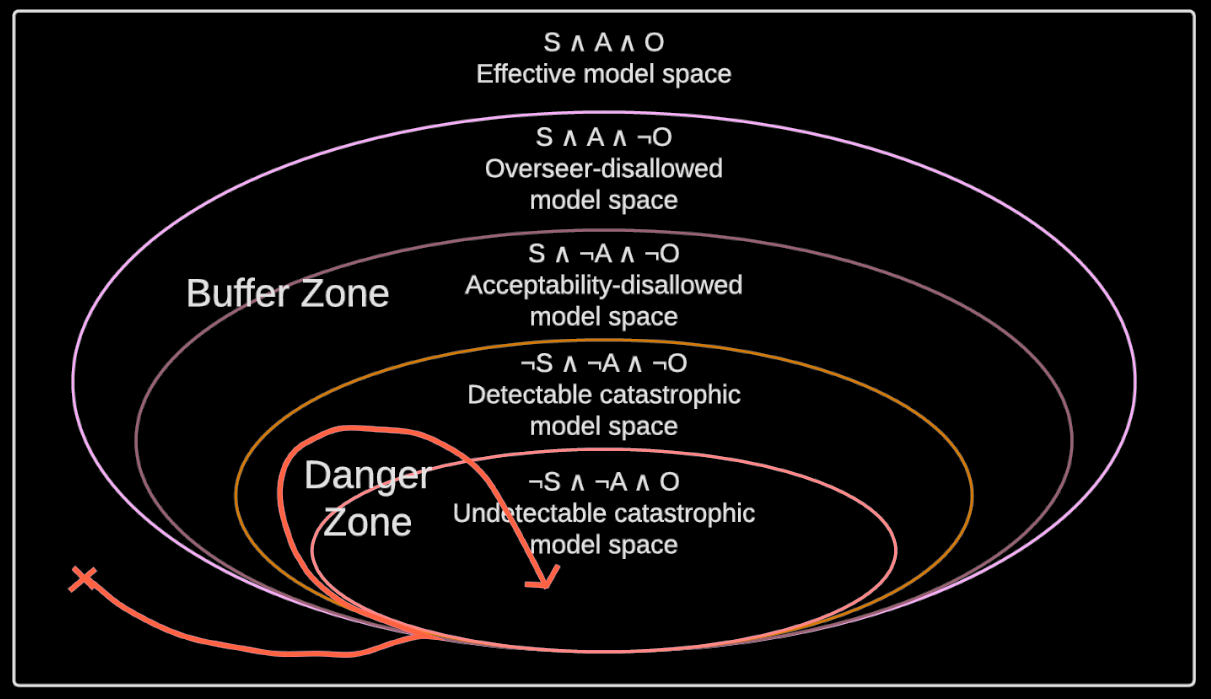 A diagram of another way in which acceptability verification might fail. The red arrow indicates the path of the training process through model space.

As a second example of a danger scenario, consider the above diagram where the model enters the detectable catastrophic model space before entering the undetectable catastrophic model space. Unlike in the previous scenario, OA does detect that the model has become unacceptable, but the problem here is that it doesn’t actually cause the trajectory to turn around and instead the model’s unacceptability just becomes undetectable. In this scenario, we do get to see that the overseer starts detecting something problematic—but then that signal just goes away when the unacceptability becomes undetectable. From the outside, this could look a lot like the overseer detecting a problem and then the training process fixing that problem—the issue being that the way it gets fixed is by making the problem undetectable rather than by actually removing the problem.

I am trying to hammer home the importance of entirely avoiding the detectable catastrophic model space, not just the undetectable catastrophic model space—both in the discussion of the previous failure mode and in this one—because I worry that people might naively think it’s reasonable to deploy a system which detects and corrects actual deception, but not reasonable to try and detect and correct some other acceptability predicate that just implies an absence of deception. But it should hopefully be clear by now why that’s such a mistake: trying to fix deception after it arises is likely to be a much harder problem than just trying to prevent it from arising in the first place. Just to catalog some reasons for the difficulty of checking for deception directly:[5] 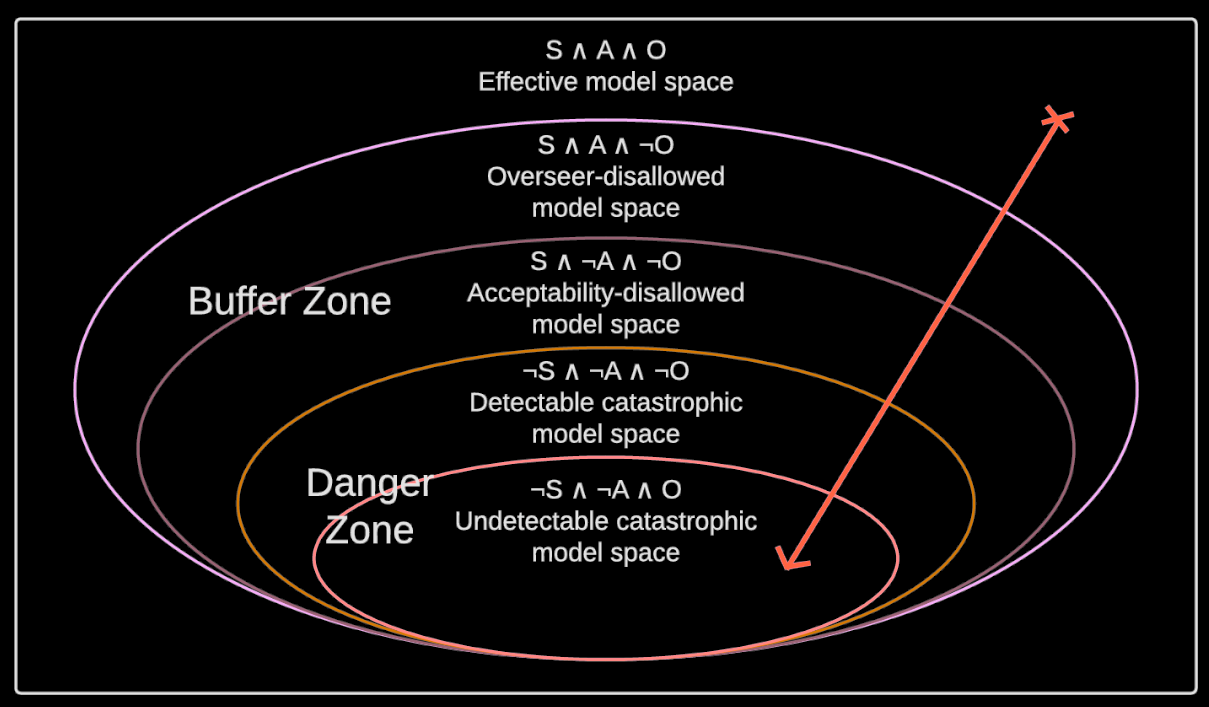 Another diagram of a way in which acceptability verification might fail. As before, the red arrow indicates the path of the training process through model space.

Finally, if we want to be rigorous, there is a third danger scenario here where the model is simply initialized directly into the danger zone—which fails the safe initialization condition. Though it might seem like this condition is almost certain to hold, there are some situations in which it might not. First, the safe initialization condition could be a problem for any sort of fine-tuning setup where the idea is to first train some simple model (an autoregressive language model like GPT-3, for example) and then fine-tune it to try to make it safe after the fact (e.g. fine-tuning on human feedback). Second, even though it might seem like randomly initialized neural networks are almost certain to be safe, the multi-prize lottery tickets hypothesis seems to imply that the final network produced by deep learning might essentially already be present as a subnetwork at initialization. Thus, the safe initialization condition could fail in such a situation if there is already a deceptive subnetwork at initialization that just gets amplified by gradient descent during training. However, I find this story pretty unlikely—for a model to be deceptive, it needs to have an understanding of the training process that it’s in, which seems pretty improbable to already exist at initialization, even if the basic structure that might eventually become a deceptive model does already exist. Thus, at least if we’re primarily worried about deception, I think it’s pretty likely that at least random initializations will in fact be safe.

Putting it all together, what the above desiderata give us is a guarantee that our training process will be able to avoid catastrophic models. However, safety is only half of the picture for any alignment proposal—the other half is competitiveness. Thus, what we are still missing are desiderata to guarantee that acceptability verification on the given acceptability predicate will actually be competitive. Adding competitiveness gives us our last two desiderata:

One way of thinking about the performance competitiveness condition is that it says that our acceptability predicate can’t be too specific—if our acceptability predicate specifies exactly how the model is supposed to work, then you’ll never be able to train models that are more competent than you know how to exactly specify, defeating the entire point of doing machine learning in the first place.[7]

The training competitiveness condition: adding acceptability verification to the loss function does not make training too much more difficult. In the case of relaxed adversarial training, we need the addition of the LM, A=−Poverseer(A(M)) term to the loss to not prevent successful training or otherwise slow down training by too much.

Putting all the different conditions together, we get the following six desiderata for what we need a good notion of acceptability to satisfy:

Note that we’ve left off the safe initialization condition since, as we’ve previously noted, unlike all the other conditions given above, it isn’t affected at all by the acceptability predicate. Thus, it’s not really an acceptability desideratum, just a general condition for acceptability verification to work.