How large of an army could you make with the first ‘human-level’ AGIs?

There’s a popular prosaic alignment strategy that goes something like this:

I’ve had a couple of conversations recently about whether such a collective would competent enough to perform a pivotal act.

An important crux seems to be: “how many copies could we run and how fast would we be able to run them?” If we had one billion human equivalents running at one million times the speed of a normal human, I would feel pretty good about our chances. But those are made-up numbers. Here are some Firmi estimates I came up with:

For reference, only 547 years of AI capabilities research and around .2 years of safety research[1] are done per day.

In the year 2050 (which is Ajeya’s median timelines estimate), you could run somewhere around 1,000,000 copies, each at 100x the speed of a human, using the training compute alone. Combining this tremendous magnitude of labor with other advantages AI systems will probably have, I think that aligned human-level AGI will probably be ‘enough.’

If you want to adjust the assumptions/​intermediate estimates, you can fiddle with this spreadsheet. The cruxiest number is probably FLOPs required to run a TAI model for one subjective second, which I’m taking to be 10^17 (Holden Karnofsky uses 10^14 for his estimate).

In addition to the uncertainties I’ve flagged in sections below, this entire framework might be wrong. Amplification might prove to be the cheapest way to scale capabilities, which means the first human-level AGI might be really big and inefficient.

According to the thousand brains theory, human intelligence emerges from an ensemble of cortical columns that are essentially copies of each other. Perhaps the first human-level AGI will be a bureaucracy of tiny models that have been trained to delegate (Daniel Kokotajlo has described a similar idea).

DeepMind’s PonderNet was trained to delegate to itself and therefore can be amplified by simply running it for more time. Also, deep learning successes like Alpha Fold, Alpha-code, and DALL-E 2 rely on hard-coded iteration that can be viewed as amplifying a weak learned model.

Applying massive amplification could be compute-intensive. So, we might develop a highly competent AGI that we can experiment with before it is economically viable to deploy.

How many years of work would the TAI copies be able to do per day (using the compute from training)?

I’m going to pull a lot of the numbers from Ajeya’s timelines report, so I’ll use the term ‘TAI’ (transformative AI) instead of ‘AGI’ from here on out. I think her definition of TAI is close enough to what I mean by ‘human-level AGI’ for the purposes of these calculations.

I’m assuming that the training compute can easily be repurposed for running copies of the TAI, which I think is reasonable since training basically involves running the model a bunch (doing a lot of forward passes).

The amount of compute used for training

If we assume that TAI will be built as soon as it is affordable, we just need to know how much compute costs and what actors are willing to spend. Those quantities are shown below and are justified here: 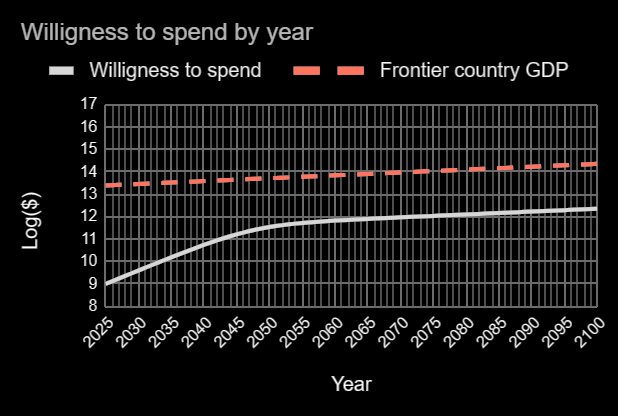 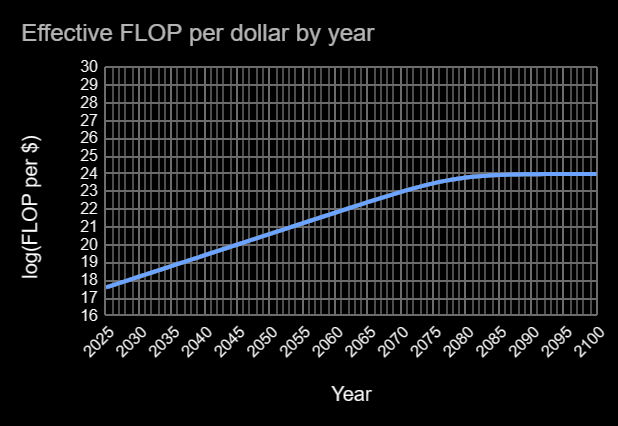 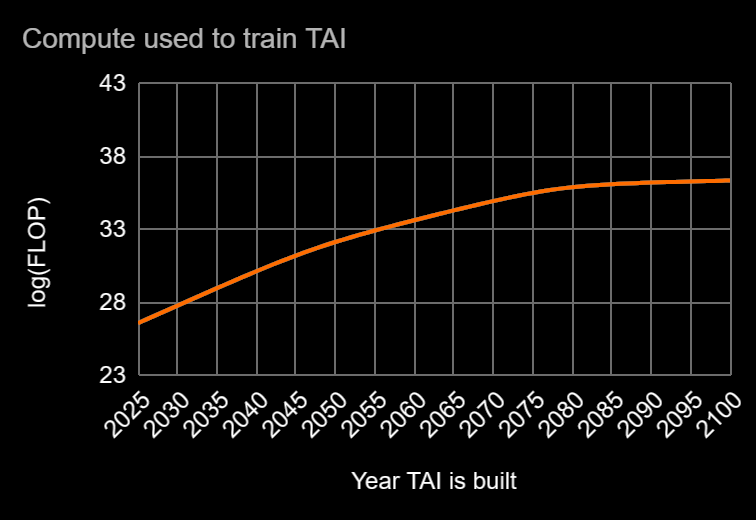 Here’s Ajeya’s distribution for the FLOP done by the first TAI model per subjective second. The mean is 10^17 which translates to 3.17e9 FLOP per subjective year. 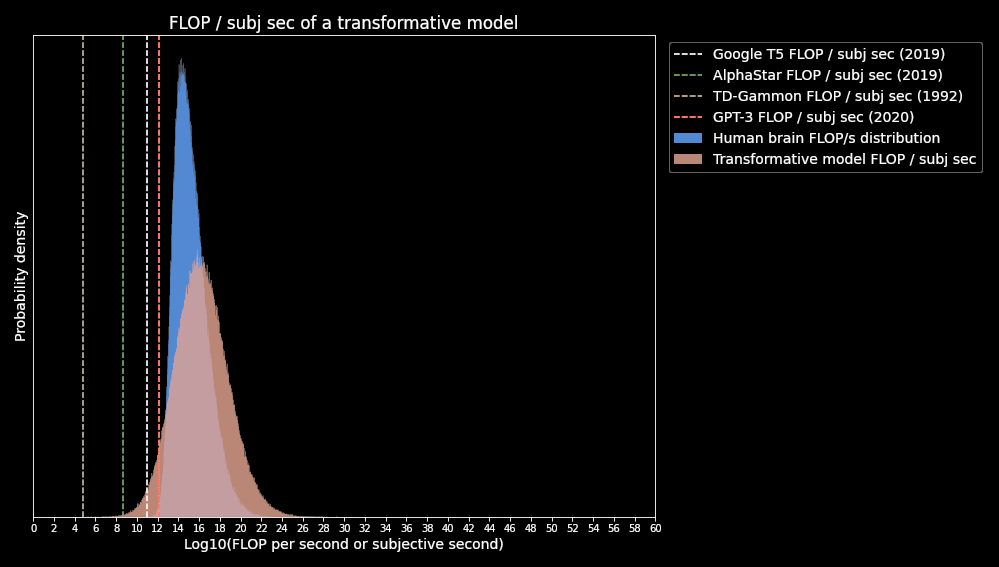 The amount of time that training takes assuming full usage of the compute (days).

My median estimate is ~ 60 days. The precision of this number is not very consequential since my uncertainty over the other quantities spans over several orders of magnitude.

Putting everything together yields the following curve for subjective years of work done per day:[2] 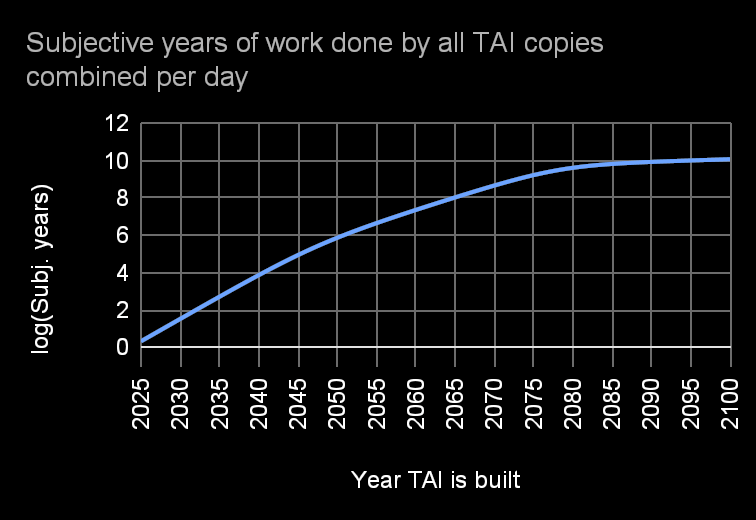 This is just using the compute from training. If I assume that actors will be willing to spend 1% of the U.S. GDP running AGI copies, the curve looks like this: 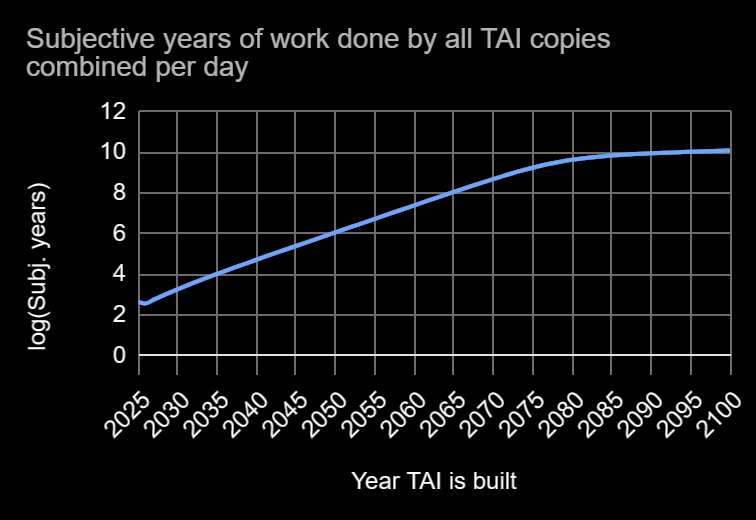 To approximate my uncertainty for these estimates, I’ll first estimate the standard deviations of my credence distributions over the input quantities:

2.98 orders of magnitude is a wide margin, but if we get TAI after 2040, the army of AGI copies should still be a force to be reckoned with.

How much would it cost to run the TAIs?

I expect energy to be the primary variable cost of running the deployed models. Here’s a plot of GPU energy efficiency over time: 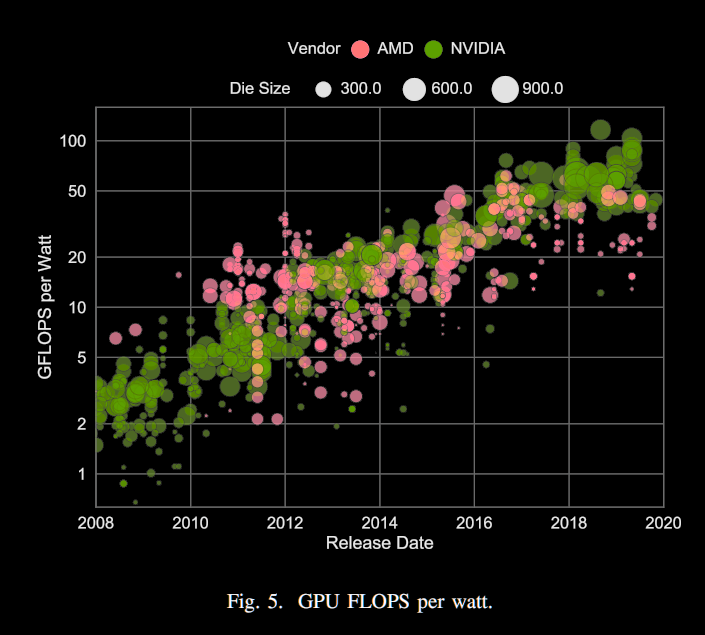 Energy efficiency has doubled every ~2.12 years. I’ll project this trend into the future and upper bound it according to Landauer’s limit, which implies that the minimum energy required to flip one bit at room temperature is around 2.8E-21 J. Since a standard FLOP requires 32 bit flips, this translates to an upper bound of 1.12E+19 FLOP per Watt. 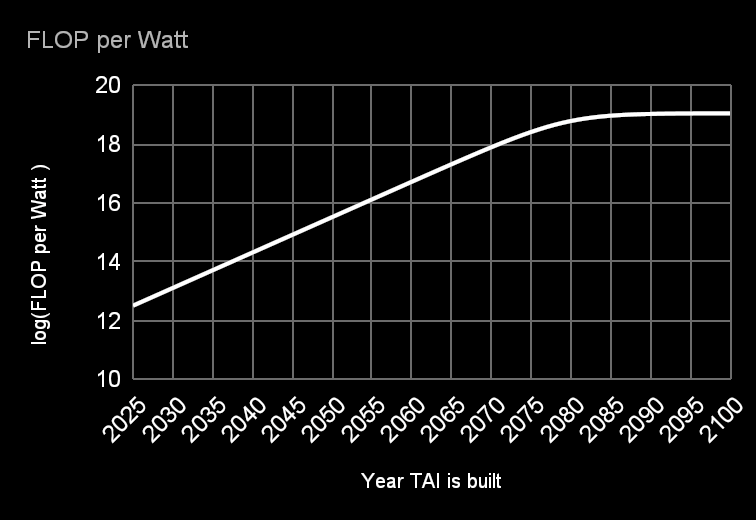 Data center energy costs are currently around $0.05 per KW hour. I’ll be conservative and assume this cost to be fixed (even though I expect it to decrease).

According to these estimates, the cost of running the deployed models should be quite low compared to hiring humans. If TAI was built today, it should be possible to run it for around $3.13 per subjective hour. 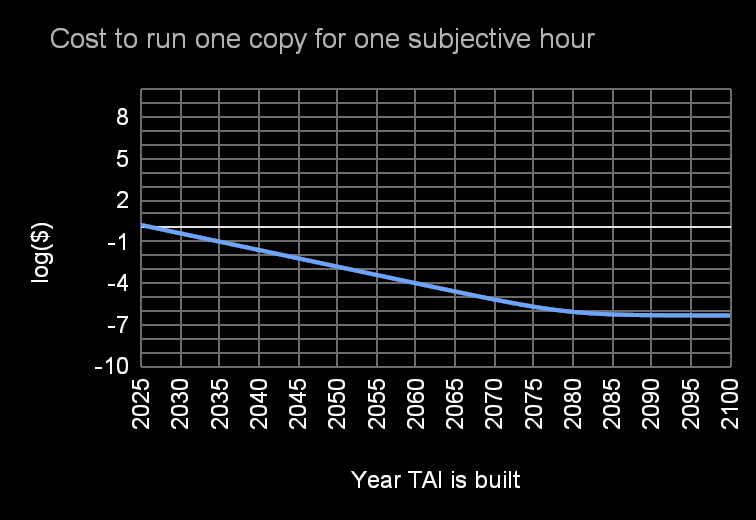 How quickly will these models run?

Serial computation is different from parallel computation. If you tell one billion humans to solve an IMO problem in one second, they would not have a chance. Heck, they probably wouldn’t even be able to add two three-digit numbers together. If you gave a single human one billion seconds (31 years) to solve that problem, it should be a piece of cake.

Research often builds off of past research, which means it is the kind of problem that benefits from serial computation. If we want human-level AGIs to build aligned superintelligence for us, it might be important for them to think much faster than we can.

The speed multiplier is then X/​Y.

A CPU or GPU core carries out one instruction at a time in what is called a cycle. The below plot shows CPU clock frequency, which is the number of cycles per second: 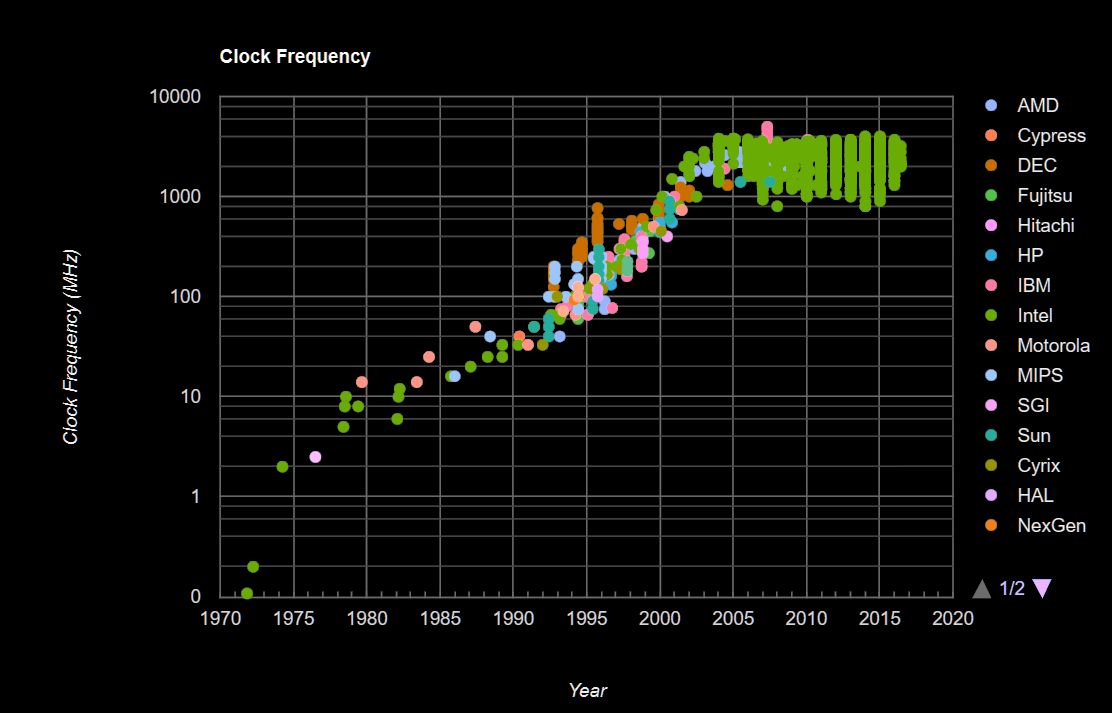 Clock frequency leveled off in around 2005 at around 5.5GHz – apparently as a result of engineering difficulties that emerge at atomic scales (transistor gates are close to 1 atom thick). Since a fused multiply-add instruction involves 2 FLOPs, 5.5GHz corresponds to 1.2E10 serial FLOPs per second.

GPU clock speed continues to increase – although growth has been slowing down and it appears to gradually be approaching 5.5GHz. 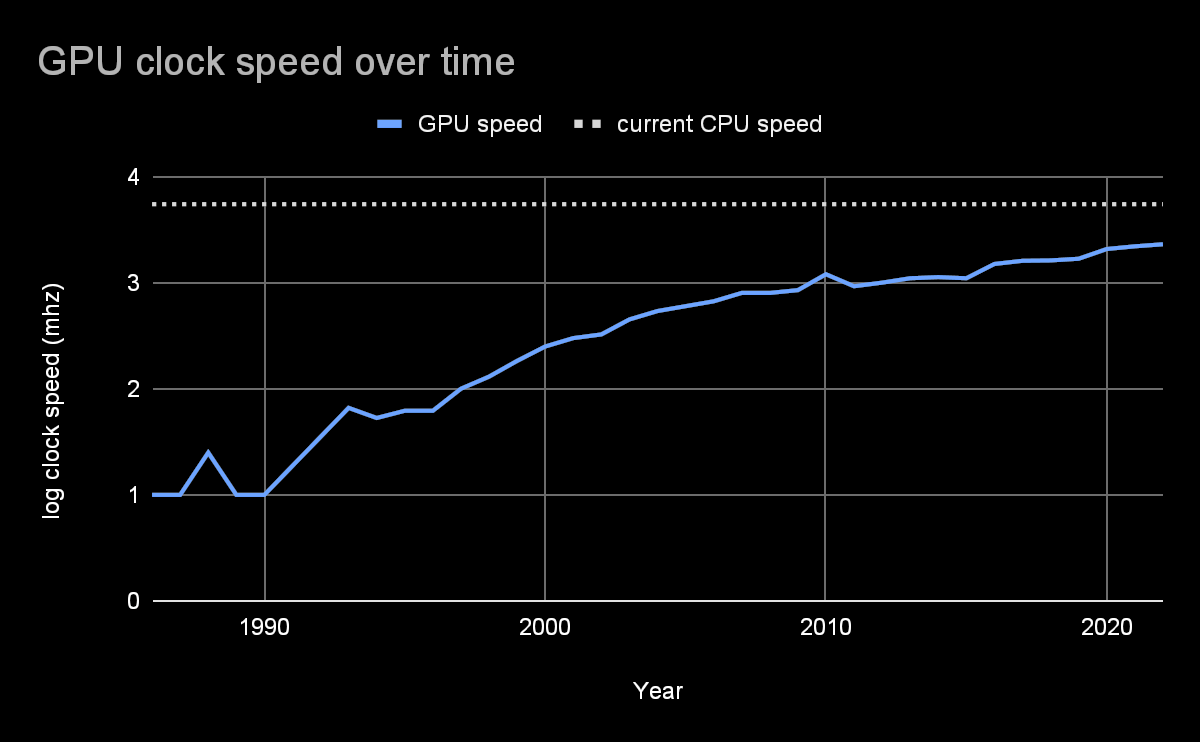 I’ll be conservative and assume that 1.2E10 FLOPs per second is the maximum serial speed we are going to achieve. Note that total FLOPs per second and FLOPs per dollar have increased as a result of greater parallelization and economies of scale, so this serial speed limit would probably not be a barrier to building TAI. It just affects how quickly deployed models will be able to run.

Serial FLOPs needed to run a brain for one second.

People often cite the fact that neurons have a max firing rate of 100hz to support the claim that the brain does not do a lot of serial computation. This justification is not quite right since the computational path could still be quite long if it goes through neurons that have not fired recently.

The more relevant quantity is transmission speed. It takes 0.5ms − 1 ms for a chemical signal to diffuse across a synapse, which means that the maximum number of sequential neuron firings that can happen in the brain per second is 2000. An OpenPhil report estimates that each spike through the synapse corresponds to approximately 1-100 FLOP of computation. This implies that only ~ 2,000-200,000 serial FLOPs per second are performed by the human brain.

By this estimate, a brain emulation could be run at ~ 60,000 − 6,000,000x the speed of a physical brain. Of course, this number should be lower after you account for network/​memory latencies and the fact that not all computation that can be done in parallel generally is done in parallel.

According to this formula, only 19,000[3] serial FLOPs are required to do a forward pass of Chinchilla. That means it should take 19,000⁄1.2E10 = 2E-6 seconds = .002 ms to do one forward pass. In the real world, GPUs don’t do every operation in parallel and there are other latencies involved. Jacob Steinhardt takes these considerations into account in his post how fast can we perform a forward pass and estimates that Chinchilla completes a forward pass in 0.7 ms. Humans type 40 words per minute on average, so Chinchilla is 1050x faster than a human at writing.

Note that the serial FLOP count increases with the log of model width parameters. Since scaling laws depend on parameter count but very weakly on shape, this means that models can be scaled up significantly and take a similar amount of time to run!!

Ajeya’s central estimate for the number of parameters the first TAI model will have is 3E14 and chinchilla has 7E10. Scaling d up 10,000x would produce a model with around 3E14 parameters, and that would only add around 4250[4] to the minimum serial FLOP count.

So theoretically, transformer models could continue to be extremely fast, even as we scale them up—although I don’t know enough about the engineering side of things to say whether there will be other bottlenecks.

My tentative estimate is that the first TAI model will be at least 100x faster than a human, although this number could easily be much larger since there is a lot of room for parallelization to improve.