The aversion factoring technique is not derived from any particular body of psych research, though it draws lightly on trigger-affect patterns and exposure therapy and takes advantage of the framework of reductionism. It was primarily developed for personal use by Andrew Critch, and then later shared and refined through iteration. 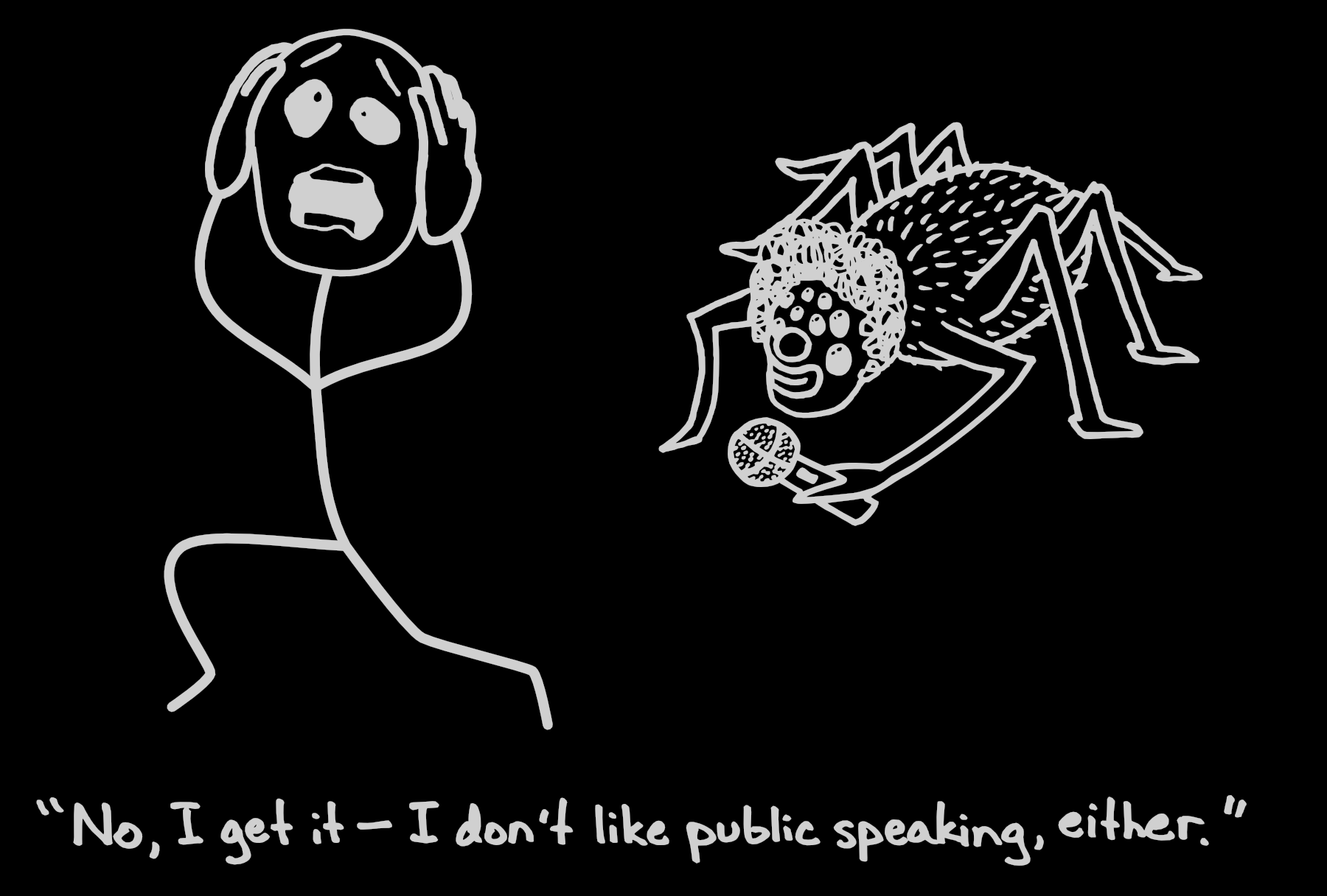 It’s quite common for people to talk about their aversions:

“I never talk on the phone if I can help it.”

“They require a six-month commitment, and I really didn’t want to be locked into anything for that long.”

“I don’t know what it is. Something about his. . . attitude, I guess? The way he talks to people? Look, I’d just really rather you not invite him.”

Aversions lead to avoidance—they’re any sort of mental mechanism that causes us to be less likely to engage in a particular activity, or to do so only with pain, displeasure, or discomfort. Aversions can be conscious or unconscious, reasoned or felt, verbal or visceral, and they can range anywhere from a slight tinge of antipathy to outright phobias.

The purpose of the Aversion Factoring technique is to give you the tools you’ll need to identify and overcome aversions. Of course, not every aversion should be overcome—it would probably be counterproductive to lose your aversion to being hit by cars, for example—but there are many activities we might engage in and enjoy if we could just get past their one sticking point, be it self-consciousness or tedium or the aftertaste of mushrooms.

In the Goal Factoring section of this sequence, we attempted to draw out the positive elements of various plans, and weave them together into a new strategy that had fewer drawbacks (or none). In Aversion Factoring, we’ll take a slightly different approach, holding the larger context constant while we address specific aspects of it one at a time.

The key insight is that no activity simply is aversive, at its core. There’s no fundamental quantity called “running” that “just sucks,” for instance—running is a complex system of experiences, and summing or averaging across all of them causes us to lose valuable detail. Treating each experience separately, we may find that we’re more or less okay with all of them, and that the ones that are the most negative can be addressed individually.

This is the “factoring” part of the process—an application of the LEGO principle, which Goal Factoring and Aversion Factoring have in common. In the example above, what was previously just a vague sense that running is bad has been clarified into a much more specific set of issues, starting with aching shins and knees and including self-consciousness and a little bit of a negative reaction to the environment. Before, the obvious intervention was “don’t run;” now, this person has the necessary information to find a specific running strategy that works (if they want to).

A few years ago, CFAR instructor Andrew Critch was looking to add more physical activity into his daily routine, and realized that it might be fun to try climbing trees. He’d enjoyed doing it as a kid, and if he could manage ten minutes of tree-climbing per day, that would add up to about five hours of extra exercise a month, with no commutes and no gym membership fees.


During his next block of free time, Critch scouted out the trees along his walk to work, and noted several that looked like they’d be great to climb. Over the next couple of weeks, though, he didn’t get into it nearly as much as he had expected to. He realized he was averse to the activity, despite having thought it through and decided it was a good idea.

So one day, he sat down to try to figure out what was going on in greater detail. It didn’t take long to realize that a big part of his hesitation was a sense of danger. He was basically alone, after all, even if there were other people nearby, and he didn’t like the idea of a branch breaking or some bark slipping or just getting tired and making a mistake.

Okay, he thought. Is that everything? If there were crash pads under all the trees, would I be completely enthusiastic about climbing them?

The answer was “no,” and a little more thinking brought up the fact that tree climbing often made his clothes look dirty, and that he was a little uncomfortable going to the cafeteria afterwards and meeting new people looking scruffy and disheveled.


Critch still wanted to climb trees, though (or, more precisely, he wanted-to-want to climb trees, but the aversions were getting in the way). So he set about solving his two problems. For the danger, he resolved to mimic the bouldering strategy of hard, not high, climbing all the way around the trunk on the lowest knots and branches. Since even that had some risk—like falling on roots or twisting an ankle—he also set aside time to practice falling and catching, building up his reflexes.

To avoid looking dirty afterward, he switched from khaki pants to dark jeans, which were both more stain-resistant and less obvious when they did get stained. New jeans cost money, and part of his original motivation was to save money, so he did a quick sanity check against the price of a gym membership, and found that he was still in the clear. Since the rest of his clothes were already dark, that was Mission Accomplished.


Yet despite really enjoying the activity and addressing the two most apparent aversions, Critch still found himself climbing trees much less than he’d thought he would. To figure out why, he did a mindful walkthrough—during his next session, he paid close attention to his moment-to-moment experience, looking for things that were having a negative impact on his enthusiasm and enjoyment.

What he noticed was that, while the climbing session itself was fine, he found the feeling of having sticky, sap-covered hands unpleasant afterward. It didn’t matter in the middle of the activity, but the block of time between climbing and washing his hands was reducing his overall enjoyment.

Unlike with the other aversions, Critch didn’t immediately try to deal this one by addressing its cause. Instead, he thought to himself You know, I think this feeling just might be unnecessary. I wash my hands all the time anyway—it’s not like they’re staying dirty for hours and hours. I think if I could just push a button and make the unpleasantness go away without actually changing the situation, I would.

And that’s essentially what he did! First, he went outside and stuck his hands in some mud on the ground, paying close attention to the sensations of grossness and wetness and muck. He stayed there for ten minutes, fully inhabiting the experience, until the unpleasantness dropped from a three-out-of-ten down to a two.

Next, he reflected on his larger goals in life—health, happiness, doing good in the world—and how completely irrelevant a few minutes of dirty hands was to the things he truly cared about. In a sense, the only negative thing about dirty hands was his reaction to it—if he didn’t feel bad about it, it wouldn’t be bad.

The next day, he repeated the same process with the actual tree sap, adding in an additional reframe that sticky hands were a hallmark of ADVENTURE. Soon, the icky feeling subsided almost completely, and thereafter, tree climbing was as awesome as he’d thought it would be at the start.

Remember—not every aversion needs to be overcome, and not every aversive activity is an activity worth doing. In the set of [dancing, singing, public speaking, interacting with strangers, asking for help, doing taxes, getting into fights, tinkering with your car, going to parties, trading stocks, feeling comfortable naked, cleaning up your apartment, learning martial arts, calling old friends, firing guns, writing code, & going on more dates], there are probably some things you’re averse to and would benefit from doing more of, but there are also probably some things you’re averse to and have no real need to do, or actively and correctly avoid.

The goal is to have the affordance to overcome aversions, so that when you recognize one in yourself, it’s up to you whether or not to do something about it (as opposed to being outside of your control). We want to be able to grow at will, but only in the directions that make sense.


In particular, it’s important to remember that the process of aversion factoring can end at any time, and not necessarily only because you’ve “solved” the aversion. You could do exposure therapy to become comfortable with standing inches away from cars as they zoom past on the freeway, but this would be a bad idea; similarly, you could fully factor every flinch and hesitation you come across, but this would be a waste of resources.

As you explore aversion factoring, we recommend framing the process as an experiment. Just as in goal factoring, you’re exploring possibilities and learning about the universe. Check your calibration at each step of the way, asking yourself whether any given aversion is actually worth solving, or whether instead it’s protecting you from things you don’t want any part of.

3. Factor the aversion out into parts

One proven technique for overcoming aversions involves identifying what thoughts lead to an aversion, tracing out the links between those thoughts and one’s negative emotions and avoidant behavior, and then critically investigating the accuracy of those thoughts. This technique, known as cognitive therapy, has been shown to be effective even with clinical phobias and anxiety disorders (Norton & Price, 2007).

A brief summary of how cognitive therapy is used to treat anxiety disorders:
https://​​www.helpguide.org/​​

A meta-analysis of treatments for anxiety disorders, which compiles quantitative evidence showing that exposure therapy and cognitive therapy are both effective (compared to relaxation techniques):

Seligman and Maier found that dogs who were allowed to voluntarily reduce aversive shock stimuli using a lever were less depressed by the experience, when compared with other dogs who were given the same shocks as controlled by the first dogs (and so were in not in control of it themselves). Moreover, the dogs who previously controlled the pain were less depressed by it in later situations when they could not control it.