Continuing my cursory exploration of semiotics and post-modern thought, I’m struck by the similarity between writing in those traditions, and picking up women. The most-important traits for practitioners of both are energy, enthusiasm, and confidence. In support of this proposition, here is a photo of Slavoj Zizek at his 2006 wedding: 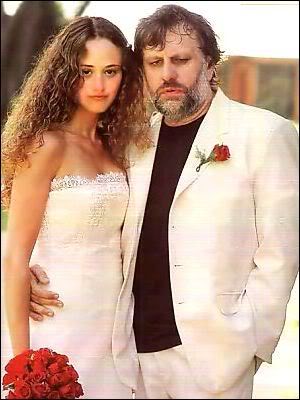 Having philosophical or logical rigor, or demonstrating the usefulness of your ideas using empirical data, does not seem to provide a similar advantage, despite taking a lot of time.

I speculate that semiotics and post-modernism (which often go hand-in-hand) became popular by natural selection. They provide specialized terminologies which give the impression of rigorous thought without requiring actual rigor. People who use them can thus out-publish their more-careful competitors. So post-modernism tends to drive rigorous thought out of any field it enters.

(It’s possible to combine post-modern ideas and a time-consuming empirical approach, as Thomas Kuhn did in The Structure of Scientific Revolutions. But it’s uncommon.)

If rigorous thought significantly reduces publication rate, we should find that the rigor of a field or a person correlates inversely with words per person-year. Establishing that fact alone, combined with the emphasis on publication in academics, would lead us to expect that any approach that allowed one to fake or dispense with intellectual rigor in a field would rapidly take over that field.

We should also then suspect that any supposedly rigorous field, or school within a field, which has a markedly high WPY, is bullshit.

I listed some prominent names from various fields under two categories, “rigorous” and “not rigorous”. Then I counted the number of books and articles they published per year. I stop the year count at min(last year of publication, year of their death) because some people slow down in their last years. I estimate average page count for articles when they’re given, and count 300 pages as 1 book. Sometimes I threw out the first publication when it appeared to be a thesis or other very early work written many years before anything else. I tried not to count patents, talks, letters, notes, reports, unpublished papers, translations, or republications. I counted autobiographies if they wrote them during their productive years, but not if they wrote them at the ends of their lives.
Some people also wrote poetry or fiction. I counted one book of poetry as equal to one book of scientific output (in the time it takes to produce), one novel as 1⁄3 of an academic book, one play as 1⁄9 of a book, and a book of plays as 1⁄3 of a book. (Yes, I pulled those numbers out of my somewhat-informed ass.) I divided by number of co-authors for multiple-author books.
Comparisons of publication rates across different time periods may not be fair, but I did them anyway.
It is important to note that I AM NOT SAYING POST-MODERNIST THOUGHT IS GARBAGE. Derrida had some good points to make.
I’m not even saying that everyone should be rigorous. Marx, Freud, and Nietzsche probably wouldn’t have been able to make their great imaginative leaps if they had been rigorous.
I am saying that, if a particular approach to a discipline enables someone to write more books per year, we should expect to find people in that discipline adopting that approach, just as novelists adopted typewriters and then computers. I’m hypothesizing that a lack of rigor enables someone to write more books per year. If this is true, we should expect any school of thought that can falsely signal rigor, or that can justify a lack of rigor, to have a strong evolutionary advantage in academic disciplines.

People I consider non-rigorous and their Books Per Year (BPY):

Dane Rudhyar (astrology): BPY = 1.05: 57 books, 1 article, 1 book of poetry, and 3 novels over 57 years (1929-1985). This was hard to count because there is almost no overlap between her bibliography on Wikipedia and on goodreads. I’m suspicious that many of these might be very short, poor-quality, or repetitive, because many of them were published long after her death.

Sigmund Freud (psychology): .49, 24 books in 49 years (1891-1939). I’m counting the number of volumes in The Standard Edition of the Complete Psychological Works of Sigmund Freud.

Slavoj Zizek (semiotic philosophy and social criticism): 1.56, 39 books in 25 years (1989-2014). Disclaimer: I haven’t read his work, just some critiques of it. ADDED: OMG, I read the first few pages of On Belief and “How did Marx invent the symptom?” He is a genuine Marxist-Leninist, who believes in the labor theory of value and the necessity of secret police and of violent oppression of non-Marxist beliefs. Also, extremely non-rigorous, but insightful, except when it comes to Marxism. His books are short, though.

Jacques Lacan (post-structuralism): ??, 65 publications but zero books over 36 years (1945-1980). I ignored his pre-war publications because he was a practicing M.D. and a soldier most of that time. This is a useless count because most of these appear to be articles, but possibly very long ones, no page lengths given. Probably a low words per year, though. His publications appear to be transcriptions of his lectures. The Internet Encyclopedia of Philosophy says “Lacan was famously ambivalent about publication.”

Trofim Lysenko (evolutionary biology): Unfortunately, I can’t find a list of his publications.

Janet Evanovich (fiction): .62, 49.5 novels and 1 book over 28 years (1987-2014). By “not rigorous” I mean she doesn’t worry about anything beyond the surface meaning in her books, and I didn’t think she thought very deeply about that. This is based on her book on writing rather than on actually reading her novels. I included her to test my “divide by 3″ factor for novels.

People I expect to be acceptably rigorous:

I. A. Richards (empirical literary theory?): .46, 18 books over 39 years (1922-1960). I haven’t read him directly, but he’s a key figure in New Criticism, which is the main alternative to modernist and post-modernist literary theory in the 20th century.

Donald Knuth (computer science): .28, 13 books and 156 articles over 54 years (1959-2012). This is problematic, because the median page count for his articles is either 1 or 2, and many are just practice math problems. I knocked off 6 publications for sounding trivial, and took average length as 4. I’m hesitant to include him since his most famous work is not original, but review.

I’m not going to draw graphs or do statistical analysis, because these numbers are just exploratory. I’d want more data, and more accurate data, from more comparable writers. I’d want at least to know number of words per year (not books per year), to refine my constants, and perhaps to build a predictive model from training data that used year of publication and age of author.

I expect that words per year (WPY) correlates with academic success. If nothing else, it must correlate with health, motivation, and spare time. Sometimes success comes from taking many years to produce one major work, though—Darwin’s theory of evolution, James Joyce’s Ulysses, Wiles’ proof of Fermat’s last theorem. So I suppose that, to be rigorous, the idea would have to be tested. I’m not sure what the control set should be.

If the average career advantage of post-modernists were less than that predicted from their WPY and intellectual-allies advantages alone, that would suggest that the content of post-modern thinking correlates negatively with success. I don’t predict that would be the result, but it would be an interesting outcome.

(Doing that experiment would be possible, but it’s probably easier just to argue that post-modernism is a totalizing metanarrative whose privileging of negative capability pathologizes the construction of stable paradigms.)

If you have some favorite rational or irrational thinkers, and can find out how many words per year they published, feel free to post below.