Yesterday morning my five-year-old daughter was asking me about mosquitos, and we got on to talking about malaria, nets, and how Julia and I donate to the AMF to keep other kids from getting sick and potentially dying. Lily took it very seriously, and proposed that when I retire she take my programming job and donate in my place.

I told her that she didn’t need to wait until after I retired to start helping, and she decided she wanted to sell candy on the bike path as a fundraiser. I told her we could do this after naps if the weather was still nice, and the first thing she said when I got her up from her nap was that she wanted to go make a sign.

She dictated to me, “Lily is selling candy to raise money for malaria nets, $1” and I wrote the letters. She colored them in: 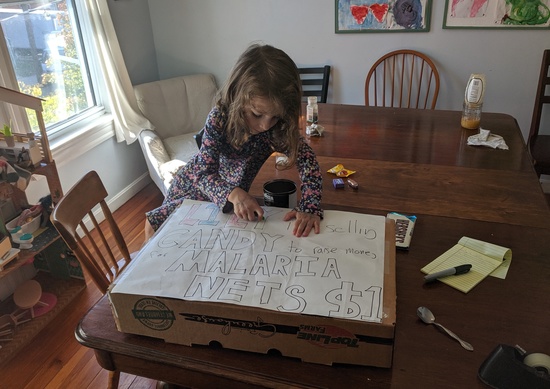 (It looks like she’s posing with the sign here, but this is just how she happened to position herself for coloring. She has short arms.)

Once Anna was up from her (longer) nap I got out the wagon and brought them over to the bike path. Lily did all the selling; I just hung out to the side, leaning against a tree. 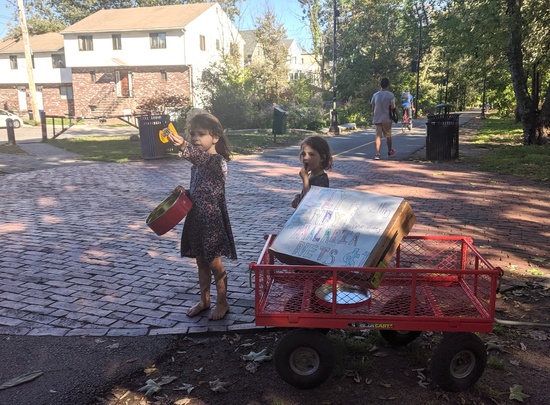 She’s always been good at talking to adults, and did a good job selling the candy. She would explain that the candy was $1/​each, that the money was going to buy malaria nets, and that malaria was a very bad disease that you got from mosquitoes. People were generous, and several people gave without taking candy, or put in an extra dollar. One person didn’t have cash but wanted to give enough that they went home and came back with a dollar. As someone who grew up in a part of town with very little foot traffic, the idea that you can just walk a short distance from your house to somewhere where several people will pass per minute continually amazes me.

After about twenty minutes all the candy was sold and Lily had collected $20.75. She played in the park for a while, and then when we came home she asked how we would use the money to buy nets. I showed her pictures of distributions on the AMF website but she wanted to see pictures of the nets in use so we spent a while on image search: 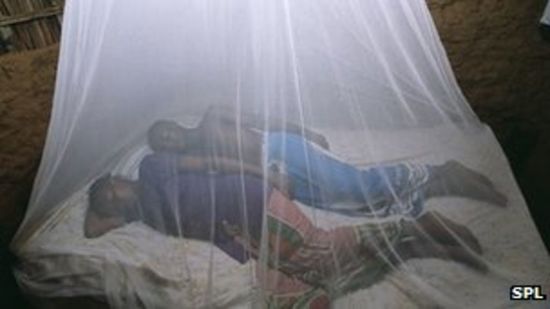 I explained that we weren’t going to distribute the nets ourselves, but that we would provide the money so other people could.

Initially she didn’t want to donate the whole amount, but wanted to set aside half to buy more candy so she could do this again. I told her that I would be happy to buy the candy. Possibly I should have let her manage this herself, but I was worried that the money wouldn’t end up donated which wouldn’t have been fair to the people who’d bought the candy, and explained this to her. She gave me the $20.75 and I used my credit card to pay for the nets. [1]

Here’s the message she dictated for the donation:

I don’t know how her relationship with altruism will change as she gets older, and I do think there are ways it will be hard for her to have parents who have strong unusual views. As we go I’m going to continue to try very hard not to pressure or manipulate her, while still giving advice and helping her explore her motivations here. I am, however, very proud of her today.


[1] I haven’t listed this on our donations page and it doesn’t count it towards our 50% goal because the donation was Lily’s and not ours.