Where The Falling Einstein Meets The Rising Mouse

Eliezer Yudkowsky argues that forecasters err in expecting artificial intelligence progress to look like this:

…when in fact it will probably look like this:

I found this argument really convincing when I first heard it, and I thought the data backed it up. For example, in my Superintelligence FAQ, I wrote:

In 1997, the best computer Go program in the world, Handtalk, won NT$250,000 for performing a previously impossible feat – beating an 11 year old child (with an 11-stone handicap penalizing the child and favoring the computer!) As late as September 2015, no computer had ever beaten any professional Go player in a fair game. Then in March 2016, a Go program beat 18-time world champion Lee Sedol 4-1 in a five game match. Go programs had gone from “dumber than heavily-handicapped children” to “smarter than any human in the world” in twenty years, and “from never won a professional game” to “overwhelming world champion” in six months.

AlphaGo represented a pretty big leap in Go ability, but before that, Go engines improved pretty gradually too (see the original AI Impacts post for discussion of the Go ranking system on the vertical axis): 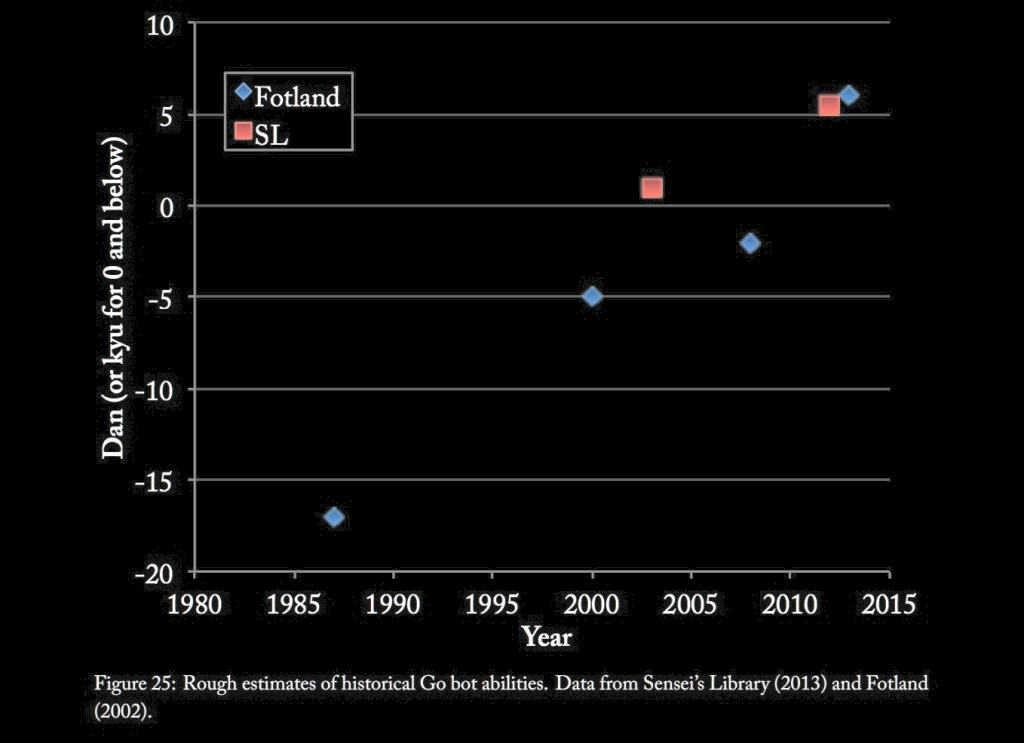 There’s a lot more on Katja’s page, overall very convincing. In field after field, computers have taken decades to go from the mediocre-human level to the genius-human level. So how can one reconcile the common-sense force of Eliezer’s argument with the empirical force of Katja’s contrary data?

Katja has her own theory:

The brains of humans are nearly identical, by comparison to the brains of other animals or to other possible brains that could exist. This might suggest that the engineering effort required to move across the human range of intelligences is quite small, compared to the engineering effort required to move from very sub-human to human-level intelligence…However, we should not be surprised to find meaningful variation in the cognitive performance regardless of the difficulty of improving the human brain. This makes it difficult to infer much from the observed variations.

Why should we not be surprised? De novo deleterious mutations are introduced into the genome with each generation, and the prevalence of such mutations is determined by the balance of mutation rates and negative selection. If de novo mutations significantly impact cognitive performance, then there must necessarily be significant selection for higher intelligence–and hence behaviorally relevant differences in intelligence. This balance is determined entirely by the mutation rate, the strength of selection for intelligence, and the negative impact of the average mutation.

You can often make a machine worse by breaking a random piece, but this does not mean that the machine was easy to design or that you can make the machine better by adding a random piece. Similarly, levels of variation of cognitive performance in humans may tell us very little about the difficulty of making a human-level intelligence smarter.

I’m usually a fan of using mutational load to explain stuff. But here I worry there’s too much left unexplained. Sure, the explanation for variation in human intelligence is whatever it is. And there’s however much mutational load there is. But that doesn’t address the fundamental disparity: isn’t the difference between a mouse and Joe Average still immeasurably greater than the difference between Joe Average and Einstein?

Mice can’t play chess (citation needed). So talking about “playing chess at the mouse level” might require more philosophical groundwork than we’ve been giving it so far.

Might the worst human chess players play chess pretty close to as badly as is even possible? I’ve certainly seen people who don’t even seem to be looking one move ahead very well, which is sort of like an upper bound for chess badness. Even though the human brain is the most complex object in the known universe, noble in reason, infinite in faculties, like an angel in apprehension, etc, etc, it seems like maybe not 100% of that capacity is being used in a guy who gets fools-mated on his second move.

We can compare to human prowess at mental arithmetic. We know that, below the hood, the brain is solving really complicated differential equations in milliseconds every time it catches a ball. Above the hood, most people can’t multiply two two-digit numbers in their head. Likewise, in principle the brain has 2.5 petabytes worth of memory storage; in practice I can’t always remember my sixteen-digit credit card number.

Imagine a kid who has an amazing $5000 gaming computer, but her parents have locked it so she can only play Minecraft. She needs a calculator for her homework, but she can’t access the one on her computer, so she builds one out of Minecraft blocks. The gaming computer can have as many gigahertz as you want; she’s still only going to be able to do calculations at a couple of measly operations per second. Maybe our brains are so purpose-built for swinging through trees or whatever that it takes an equivalent amount of emulation to get them to play chess competently.

In that case, mice just wouldn’t have the emulated more-general-purpose computer. People who are bad at chess would be able to emulate a chess-playing computer very laboriously and inefficiently. And people who are good at chess would be able to bring some significant fraction of their full most-complex-object-in-the-known-universe powers to bear. There are some anecdotal reports from chessmasters that suggest something like this – descriptions of just “seeing” patterns on the chessboard as complex objects, in the same way that the dots on a pointillist painting naturally resolve into a tree or a French lady or whatever.

This would also make sense in the context of calculation prodigies – those kids who can multiply ten digit numbers in their heads really easily. Everybody has to have the capacity to do this. But some people are better at accessing that capacity than others.

But it doesn’t make sense in the context of self-driving cars! If there was ever a task that used our purpose-built, no-emulation-needed native architecture, it would be driving: recognizing objects in a field and coordinating movements to and away from them. But my impression of self-driving car progress is that it’s been stalled for a while at a level better than the worst human drivers, but worse than the best human drivers. It’ll have preventable accidents every so often – not as many as a drunk person or an untrained kid would, but more than we would expect of a competent adult. This suggests a really wide range of human ability even in native-architecture-suited tasks.

I think self-driving cars are already much better than humans at certain tasks – estimating differences, having split-second reflexes, not getting lost. But they’re also much worse than humans at others – I think adapting to weird conditions, like ice on the road or animals running out onto the street. So maybe it’s not that computers spend much time in a general “human-level range”, so much as being superhuman on some tasks, and subhuman on other tasks, and generally averaging out to somewhere inside natural human variation.

This sort of thing is no doubt true. But I still find it surprising that the average of “way superhuman on some things” and “way subhuman on other things” averages within the range of human variability so often. This seems as surprising as ever.

Theory 1.1: Humans Are Light-Years Beyond Every Other Animal, So Even A Tiny Range Of Human Variation Is Relatively Large

That is, imagine a Zoological IQ in which mice score 10, chimps score 20, and Einstein scores 200. Now we can apply Katja’s insight: that humans can have very wide variation in their abilities thanks to mutational load. But because Einstein is so far beyond lower animals, there’s a wide range for humans to be worse than Einstein in which they’re still better than chimps. Maybe Joe Average scores 100, and the village idiot scores 50. This preserves our intuition that even the village idiot is vastly smarter than a chimp, let alone a mouse. But it also means that most of computational progress will occur within the human range. If it takes you five years from starting your project, to being as smart as a chimp, then even granting linear progress it could still take you fifty more before you’re smarter than Einstein.

This seems to explain all the data very well. It’s just shocking that humans are so far beyond any other animal, and their internal variation so important.

Maybe the closest real thing we have to zoological IQ is encephalization quotient, a measure that relates brain size to body size in various complicated ways that sometimes predict how smart the animal is. We find that mice have an EQ of 0.5, chimps of 2.5, and humans of 7.5.

But most mutations that decrease brain function will do so in ways other than decreasing brain size; they will just make brains less efficient per unit mass. So probably looking at variation in brain size underestimates the amount of variation in intelligence. Is it underestimating it enough that the Einstein – Joe difference ends up equivalent to the Joe – mouse difference? I don’t know. But so far I don’t have anything to say it isn’t, except a feeling along the lines of “that can’t possibly be true, can it?”

But why not? Look at all the animals in the world, and the majority of the variation in size is within the group “whales”. The absolute size difference between a bacterium and an elephant is less than the size difference between Balaenoptera musculus brevicauda and Balaenoptera musculus musculus – ie the Indian Ocean Blue Whale and the Atlantic Ocean Blue Whale. Once evolution finds a niche where greater size is possible and desirable, and figures out how to make animals scalable, it can go from the horse-like ancestor of whales to actual whales in a couple million years. Maybe what whales are to size, humans are to brainpower.

Stephen Hsu calculates that a certain kind of genetic engineering, carried to its logical conclusion, could create humans “a hundred standard deviations above average” in intelligence, ie IQ 1000 or so. This sounds absurd on the face of it, like a nutritional supplement so good at helping you grow big and strong that you ended up five light years tall, with a grip strength that could crush whole star systems. But if we assume he’s just straightforwardly right, and that Nature did something of about this level to chimps – then there might be enough space for the intra-human variation to be as big as the mouse-chimp-Joe variation.

How does this relate to our original concern – how fast we expect AI to progress?

The bad news is that if evolution was able to make humans so many orders of magnitude more intelligent in so short a time, then intelligence really is easy to scale up. Once you’ve got a certain level of general intelligence, you can just crank it up arbitrarily far by adding more inputs. Consider by analogy the hydrogen bomb – it’s very hard to invent, but once you’ve invented it you can make a much bigger hydrogen bomb just by adding more hydrogen.

This doesn’t match existing AI progress, where it takes a lot of work to make a better chess engine or self-driving car. Maybe it will match future AI progress, after some critical mass is reached. Or maybe it’s totally on the wrong track. I’m just having trouble thinking of any other explanation for why the human level could be so big.