(Nothing here is actually new, but a short explanation with pictures would have been helpful to me a while ago, so I thought I’d make an attempt.)

Let me start with a patch of territory: a set of things that exist. The number of rows is far from clear, but I’ll use six candidates as a sample; and of course the diagram ought to be a tree, with many elements on each row converging to fewer on the row above, but you’ll have to imagine that part. 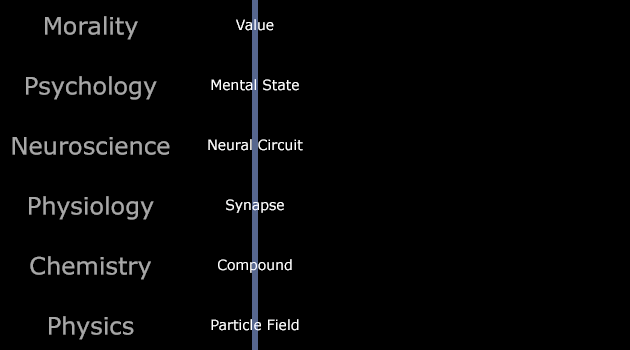 The blue line that runs through the column is not causation, but identity. It took me a long time (and many knocks about the head from smarter people) to realize that this line is directionless. If someone labels the top Meaningful and the bottom Meaningless, or the top Important and the bottom Unimportant, we see this at once for an error; but the same labels are still errors, if applied in the opposite order. If someone labels the top Contingent and the bottom Necessary, this is another error; if the top Subjective and the bottom Objective, another; or if the top Less Real and the bottom More Real, another still. (Some errors of this type have been called “reductionism,” but they aren’t the thing people mean when they say “reductionism” around here.) Whatever is, is real—and equally so, wherever it appears along the blue line.

At one time I would have labelled the top Emergent and the bottom Fundamental, but David Deutsch convinced me that even this was a mistake. Suppose we grant that a mind of arbitrary power, given only the bottom row, could deduce all the others—a popular hypothesis for which we have some good evidence (though not too much). Even then: could not this same mind, given only the complete row for Physiology, deduce the contents of Chemistry no less readily? The blue line has no direction; if I forget this I forget what identity means, and cast myself into confusion—the same type of confusion afflicting one who says, “Science believes that morality’s not real!” Better, then, to unlabel the blue line entirely, and when someone wants to know what ontological difference exists between the higher rows and the lower, say “Mu.” (Until I realized this I did not understand the metaethics sequence—but that isn’t the topic of this post.)

Where does that leave reductionism? Right where it was, untouched. As finite entities, we never perceive the blue line as a whole—not a single azure band of the infinite expanse in which we live. We have to divide the line into graspable segments, and therefore must explain how each segment connects to the others; we must spin the green threads of explanation, drawing a map to overlay the territory. (The diagram is simplified here as well; a green thread is not as simple as “compounds explain synapse,” but an intricate dance of analysis and synthesis.) In dividing the line we introduce relation between its divisions, and in introducing relation we introduce direction; emergence is a feature of maps, not of territories. (I would not say “The mind emerges from the brain,” but “The active brain is the mind, and models of the mind emerge from models of the brain.”) Reductionism proper is just this: noticing that green arrows are always present, and always point up. The whole is never more, nor less, than the sum of its parts; it only seems that way, if some parts have escaped our notice. 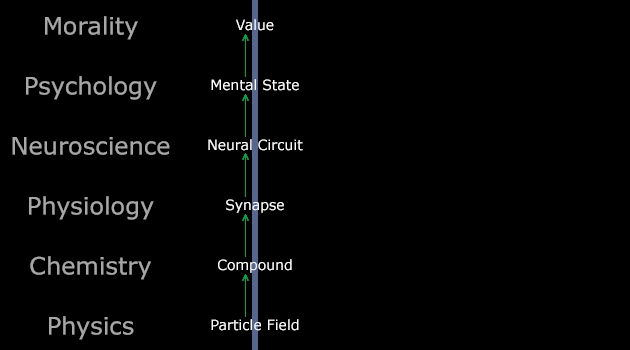 Now let’s add a few more columns; again, we’ll simplify the structure so we can see it, leaving out all worlds but one. 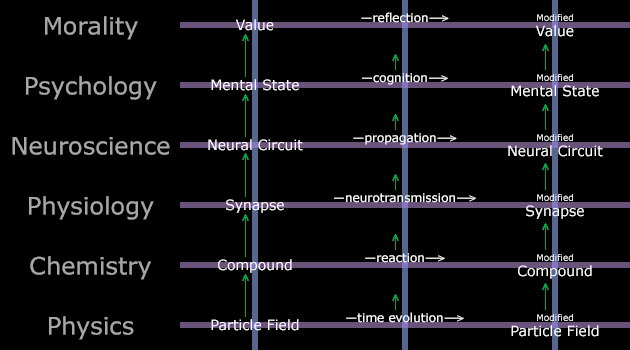 The violet lines are causation—how things are; together with the blue of what things are, they form indigo Reality: the World That Is. (Maybe the violet lines too have no direction; this sounds like timeless physics, of which I don’t feel I can wisely speak.) In any case, they extend far beyond our reach, as each effect in turn becomes a cause; once again we find ourselves dividing the lines into portions we can grasp, and to restore the continuity we once removed, we spin threads of red. These too are explanations—though of another kind than the green. Just as violet lines connect blue lines to form a complete territory, red threads connect strands of green threads to form a complete map. 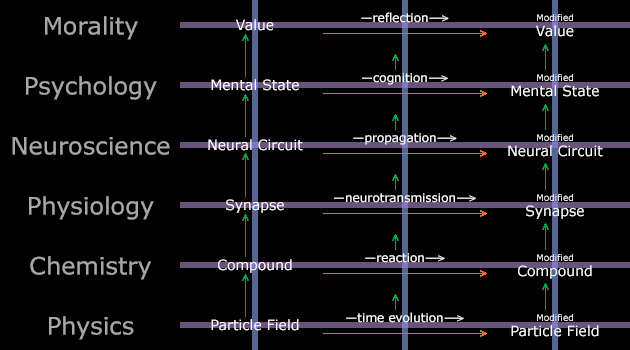 There are traps to fall into here, too. If we believed that the only violet lines (or the only red threads) that counted as real or meaningful were the ones on the bottom row, we would commit another error; this error also has been called “reductionism”—small wonder that it’s sometimes deployed as a term of abuse! Or—because we are fallible and the true multiply-branching structure is hard to perceive—we might draw a red arrow pointing left, and be guilty of mere illogic.

But if we can braid red and green together, our best strength is here—in threads of gold. Only a golden thread is knowledge made whole, and no golden thread is ever spun but of green and red in harmony; until I know what a thing is and how it comes to be, both, I do not understand that thing. 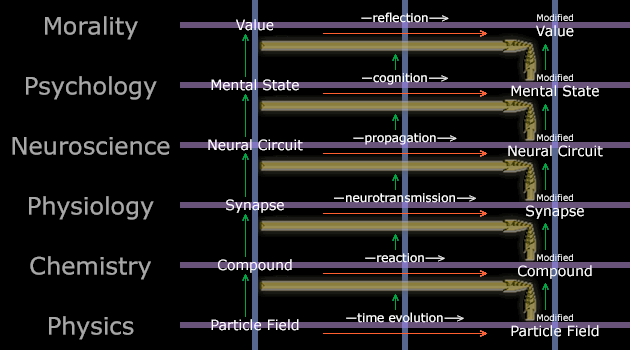 If you’re wondering about the empty space beneath, remember that the number of rows in the true structure is far above six; I suspect it is infinite. The number of columns is far higher than shown as well, so a golden thread connects, not a single point to a single point, but a wide expanse of one row to a wide expanse of the row above it. Golden threads are far-reaching theories and models—spun of many smaller explanations.

Often, those who find their cloth too threadbare for their taste will turn to another source of material: the beige threads of supernaturalism. Beige looks a bit like gold, if not examined too closely, and these threads have one great advantage: to spin them is the easiest thing in the world. Since they’re unanchored to reality, you’re free to craft them in any length or shape you like, lay them with arrows pointing wherever suits you, and even cover threads of red or green or gold whose lustre seems displeasing. Some have been taught to weave with beige alone, and in years of toil wrought patterns of strange and desolate beauty; but every hour of labour made their work, not more akin to fact, but less. 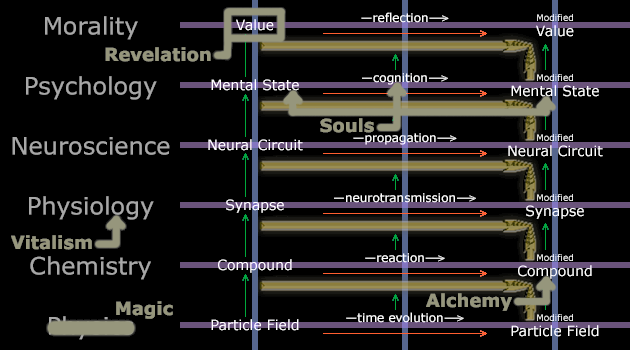 In spinning green and red, and in braiding them as gold, we become scientists; in cutting loose the snarls of beige, we become naturalists; in weaving our many threads into sturdy cloth, we become rationalists. Then we join our separate cloths as one, and in such tapestries—if all goes well—we glimpse truth: the harmony of indigo and gold.
Shane_Patt
37 points
27 commentsLW linkArchive
Map and TerritoryReductionism