Analysis of a Secret Hitler Scenario

Secret Hitler is a social deception game in the tradition of mafia, the resistance and Avalon [1]. You can read the rules here if you aren’t familiar. I haven’t played social deception games regularly since 2016 but in my mind it’s a really good game that represented the state of the art in the genre at that time. I’m going to discuss an interesting situation in which I reasoned poorly.

I was a liberal in a ten player game. The initial table set up, displaying relevant players was, 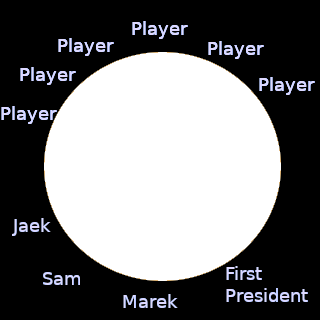 We passed a fascist article in the first round. The next government was Marek as president and Chancellor a player 3 to the right of Marek [2]. Marek passed a fascist article and inspected Sam and declared Sam was fascist to Sam’s counterclaim that Marek was fascist. Sam was to the left of Marek so we had no data about him. The table generally supported Sam but I leaned towards believing Marek.

At the beginning of the game my view of possibilities looked roughly like: 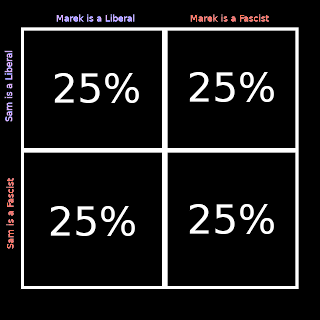 But of course I’m already approximating. From my perspective an individual is only 4⁄9 to be Fascist and the events that two individuals are fascist is not independent. A more careful calculation would have been:

So a better perspective would have been: 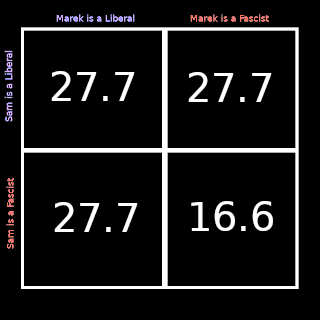 I don’t think I could do this math consistently in game though so I’ll do the rest of the analysis with my original priors. I’ve included it here for reference in your future 10 player games of Secret Hitler.

When Marek declared Sam was Fascist the only scenario which is confidently eliminated is that both are liberal. Any reasonable liberal player is truth promoting and has no reason to lie. At first glance it seems that the possibility that both are fascist is also eliminated as the fascists should have no reason to fight each other. This doesn’t strictly hold though. The fascists only need one fascist in a government to likely sink it and if they reason that the liberals will reason that one of them must be good then they have good reason to pick fights with each other. But in practice in an accusation situation the table often opts to pick neither so its a risky move.

In the moment I figured there was about a 50-50 chance that a fascist would choose to call a liberal a fascist or a liberal. Let’s call fascists who lie about liberal’s identities bold and fascists who tell the truth timid. I discounted the possibility that both were fascist and I reasoned with probabilities from the first square. So given that Marek had accused Sam that meant that Marek was a liberal with probability 75%.

The problem is I didn’t adequately update on Marek’s fascist presidency. In my mental model of the game it’s not the improbable to draw 3 fascist articles. This mental model is derived from the fact that it generally happens once or twice a game. But its still an unlikely event in the sense that I should consider it evidence that the president was fascist. From the reports of the first group 3 fascist articles had already been buried. Even if I distrust them I can still guess at least 2 fascist articles were buried. So the probability that 3 fascist articles were drawn again is at most (115)/(145)≈0.23. Going into the investigation I had a belief that Marek was Fascist with probability about 50% but I should have already updated to ~88% that he was a fascist as opposed to an unlucky liberal (100% of the time he didn’t draw 3 fascist articles he buried a liberal and is a fascist and half the rest of the time he’s a fascist by my prior). Given that, even with my conjecture that Fascists make false accusations only half the time I should have guessed Marek was more likely fascist than Sam. Marek’s accusation demonstrated Marek is not a timid fascist which I conjectured to be half the fascist probability mass. By Bayes’ Theorem I should have updated to Marek being fascist with probability:

I definitely computed badly in the moment. I think my model building was also bad in a number of other ways which are harder for me to put numbers on:

Thanks for reading and let me know if you have any other thoughts about the position.