Others’ predictions of your performance are usually more accurate

Sorry if the positive illusions are old hat, but I searched and couldn’t find any mention of this peer prediction stuff! If nothing else, I think the findings provide a quick heuristic for getting more reliable predictions of your future behavior—just poll a nearby friend!

Peer predictions are often superior to self-predictions. People, when predicting their own future outcomes, tend to give far too much weight to their intentions, goals, plans, desires, etc., and far to little consideration to the way things have turned out for them in the past. As Henry Wadsworth Longfellow observed,

“We judge ourselves by what we feel capable of doing, while others judge us by what we have already done”

...and we are way less accurate for it! A recent study by Helzer and Dunning (2012) took Cornell undergraduates and had them each predict their next exam grade, and then had an anonymous peer predict it too, based solely on their score on the previous exam; despite the fact that the peer had such limited information (while the subjects have presumably perfect information about themselves), the peer predictions, based solely on the subjects’ past performance, were much more accurate predictors of subjects’ actual exam scores.

In another part of the study, participants were paired-up (remotely, anonymously) and rewarded for accurately predicting each other’s scores. Peers were allowed to give just one piece of information to help their partner predict their score; further, they were allowed to request just one piece of information from their partner to aid them in predicting their partner’s score. Across the board, participants would give information about their “aspiration level” (their own ideal “target” score) to the peer predicting them, but would be far less likely to ask for that information if they were trying to predict a peer; overwhelmingly, they would ask for information about the participant’s past behavior (i.e., their score on the previous exam), finding this information to be more indicative of future performance. The authors note,

They go on to say, rather poetically I think, that they have observed “the triumph of hope over experience.” People situate their representations of self more in what they strive to be rather than in who they have already been (or indeed, who they are), whereas they represent others more in terms of typical or average behavior (Williams, Gilovich, & Dunning, 2012).

I found a figure I want to include from another interesting article (Kruger & Dunning, 1999); it illustrates this “better than average effect” rather well. Depicted below is an graph summarizing the results of study #3 (perceived grammar ability and test performance as a function of actual test performance): 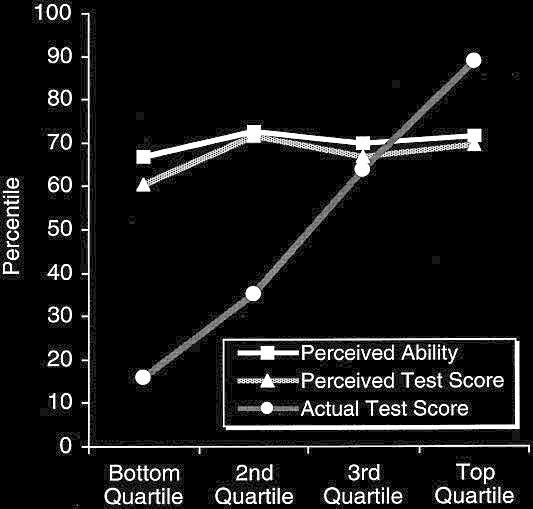 Along the abscissa, you’ve got reality: the quartiles represent scores on a test of grammatical ability. The vertical axis, with decile ticks, corresponds to the same peoples’ self-predicted ability and test scores. Curiously, while no one is ready to admit mediocrity, neither is anyone readily forecasting perfection; the clear sweet spot is 65-70%. Those in the third quartile seem most accurate in their estimations while those the highest quartile often sold themselves short, underpredicting their actual achievement on average. Notice too that the widest reality/​prediction gap is for those the lowest quartile.