This is independent research. To make further posts like this possible, please consider supporting me.

Epistemic status: This is my understanding of multiple years of technical work by several researchers in just a few days of reading.

But neural networks have in fact turned out to be extremely important. Over the past 10 years we have worked out how to get neural networks to perform well at many tasks. And while we have developed a lot of practical know-how, we have relatively little understanding of why neural networks are so surprisingly effective. We don’t actually have many good theories about what’s going on when we train a neural network. Consider the following conundrum:

Since neural networks can approximate any function whatsoever, why is it that practical neural network training so often selects one that generalizes well? This is the question addressed by a recent series of papers by Chris Mingard.

The basic up-shot of Chris’ work, so far as I can tell, is the following:

Chris’ work consists of a combination of empirical and theoretical results that suggest but do not decisively prove the above claims. In this post I will attempt to explain my understanding of these results.

Chris’ work is all about volumes occupied by different functions in parameter space. To keep things simple, let’s consider a machine learning problem in which the inputs are tiny 2x2 images with each pixel set to 0 or 1, and the output is a single 0 or 1: 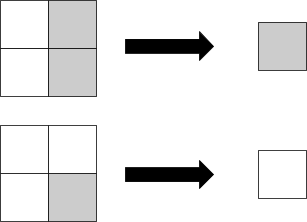 Since there are 4 input pixels and each one can be either a 0 or a 1, there are 16 possible inputs. Each one of those inputs could be mapped to either a 0 or 1 as output, so there are 2^16 = 65,536 possible mappings from inputs to outputs. Any neural network with four input neurons and one output neuron is going to express one of these 65,536 possible mappings[1]. We could draw out the whole space of possible neural network parameters and label each point in that space according to which of the 65,536 mappings it expresses: 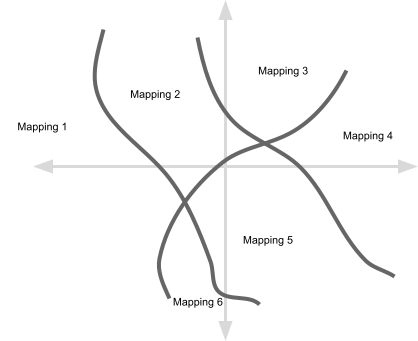 Each point in the above diagram represents a particular setting of the parameters in a neural network. I have drawn just two dimensions but there will be far more parameters than this. And I have drawn out volumes for 6 mappings but we would expect all 65,536 mappings to show up somewhere within the parameter space.

In order to demonstrate this, Chris worked with the well-known MNIST dataset, which contains images of handwritten digits of 28x28 pixels. This means that the number of possible images is 2^56, since in this dataset there are two possible pixel values, and the number of possible mappings is 10(256), since in this dataset there are 10 possible outputs. This is a very large number, which makes it infeasible to explore the entire space of mappings directly. Also, Kolmogorov complexity is uncomputable. So there was quite a bit of analytical and experimental work involved in this project. This work is summarized in the blog post “Deep Neural Networks are biased, at initialisation, towards simple functions”, with references to the underlying technical papers. The conclusions are not definitive but they are highly suggestive, and they suggest that mappings with lower Kolmogorov complexity occupy relatively larger volumes in parameter space.

A second blog post by Chris summarizes further empirical and theoretical work suggesting that yes, the optimization algorithms we use to train neural networks are in fact more likely to select mappings occupying larger volumes in parameter space. That blog post is called “Neural networks are fundamentally Bayesian”, but it seems to me that viewing this behavior as Bayesian, while reasonable, is actually not the most direct way to understand what’s going on here.

What is really going on here is that within our original parameter space we eliminate all mappings except for the ones that perfectly classify every training image. We don’t normally train to 100% accuracy in machine learning but doing so in these experiments is a nice way to simplify things. So our parameter space now looks like this: 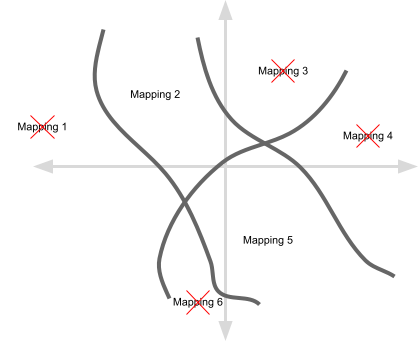 The question is now: for the mappings that remain, is the standard neural network training algorithm (stochastic gradient descent) more likely to select mappings that occupy larger volumes in parameter space?

To investigate this, Chris compared the following methods for selecting a final set of neural network parameters:

We know that method 1 is more likely to select mappings that occupy larger volumes in parameter space because it is sampling at random from the entire parameter space, so a mapping that occupies twice the parameter space volume as some other mapping is twice as likely to be selected. So by comparing method 1 to method 2 we can find out whether practical neural network training algorithms have this same property.

But actually running method 1 is infeasible since it would take too long to find a set of neural network parameters that perfectly classify every image in the training set if sampling at random, so much of the work that Chris did was about finding a good approximation to method 1. To read about the specific methods that Chris used, see the blog post linked above and the technical papers linked from that post.

The basic picture that emerges is nicely illustrated in this graphic from the blog post linked above: 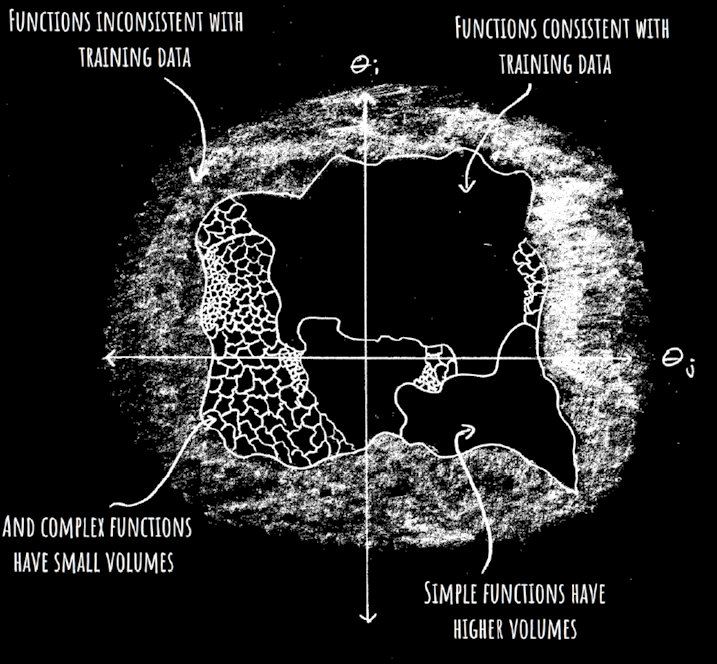 This section added based on this helpful comment by interstice.

Both of the claims discussed above are supported by a mixture of theoretical and empirical results. The empirical results are based on machine learning tasks that are relatively small-scale. This is understandable because the experiments involve re-training networks hundreds of thousands of times from scratch, which would be very expensive for the largest networks and problems being tackled today. However, it leaves open the question of whether these results will continue to hold as we run experiments with larger-scale networks and problems.

For further discussion of the likely reach of the results discussed here see this excellent post and its associated comments.