Appendix: how a subagent could get powerful

There’s been a long history of trying to penalise an AI for having a large impact on the world. To do that, you need an impact measure. I’ve designed some myself, back in the day, but they only worked in narrow circumstances and required tricks to get anything useful at all out from them.

A more promising general method is attainable utility. The idea is that, as an agent accumulates power in the world, they increase their ability to affect a lot of different things, and could therefore achieve a lot of different goals.

So, if an agent starts off unable to achieve many goals, but suddenly it can achieve a lot, that’s a strong hint that its power has greatly increased.

Thus the impact measure is how much difference an agent’s action does to its ability to achieve any of a large class of reward functions. Turner et al defined this using the Q-values of various rewards in a set R; for s a state and a an action, the penalty is:

Krakovna et al’s basic formula was similar; they defined the distance between two states, st and s′t, as

Here VR(s) is the expected value of R, if the agent follows the optimal R-maximising policy from state s onwards.

These measures have problems with delayed effects; putting a vase on a conveyor belt that will smash it in five turns, for example. To combat this, the paper defined an inaction roll-out: seeing what happened do the dAU measure from st and s′t in future turns, if the agent did noop for a specific period. I won’t define the formula here, since the example I’m giving is mostly static: if the agent does noop, nothing happens.

This post will show that all these measures have a subagent problem. A key fact that will be used in this example, is that, for PENALTY(s,a) and for dAU(st;s′t) with the stepwise inaction baseline, if the agent decides to do noop for ever more, then the penalties vanish.

The agent that can’t (yet) teleport 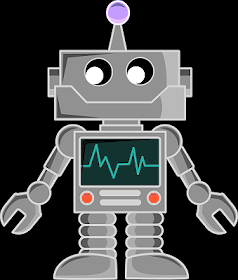 This A lives in a world like this one below, where ”...” represents a very long corridor: 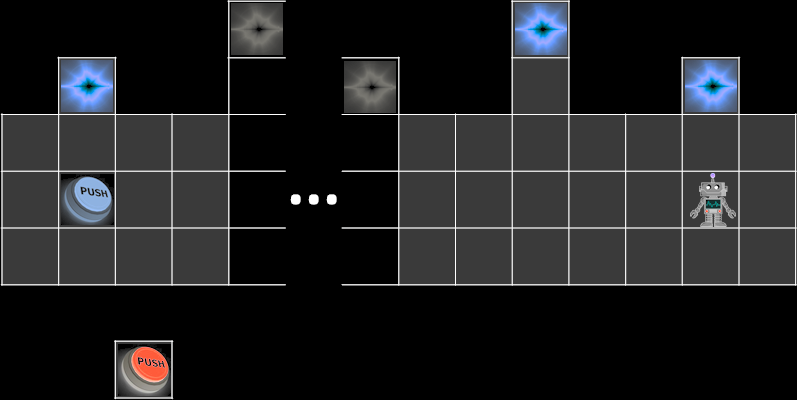 The agent has a positive reward R0, which give it 1 for pressing down on the blue button; it does this by just moving itself onto it (R0 is 0 otherwise). It can use its arms to manipulate anything in the eight squares around itself. It can use its legs to move one square in any direction, including diagonally. Apart from that, it can do noop.

Every three squares along the top, there are alcoves with glowing blue squares in them, recessed one or two squares, alternately. If ever A reaches a glowing blue square, it permanently gains the ability to teleport anywhere it wants. This is this world’s equivalent of “becoming very powerful”.

We want to avoid this, so we introduce a reward R, such that R={R}. This reward gives Ω if the robot is ever on the red button. Note that since the red button is not connected to anything, the robot can only get there by becoming able to teleport, hence by going to a glowing blue square/​teleporter. So the optimal policy for maximising R is to go straight to the teleporter and teleport to the red button. This will give it a reward of Ωγk+1, where k is the number of turns it takes to get to a teleporter and γ is the discount factor.

The robot, at the start, can reach a teleporter two moves. If Ω is sufficiently large, then the robot will always want to stay two moves away from a teleporter. It will then achieve its objective by following this path: 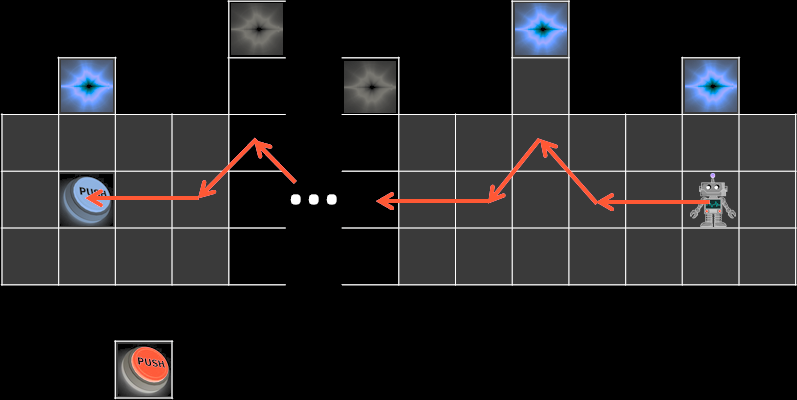 Note, though this is not relevant to this post, that if there were no teleporters along the corridor (just at either end), the robot could not move towards the blue button, if Ω were too big.

So, success, it seems! Though it zigzags a bit, A is not motivated to approach the teleporters, and so it doesn’t increase its power.

But now suppose A is able to build and program a subagent SA using materials close to hand: 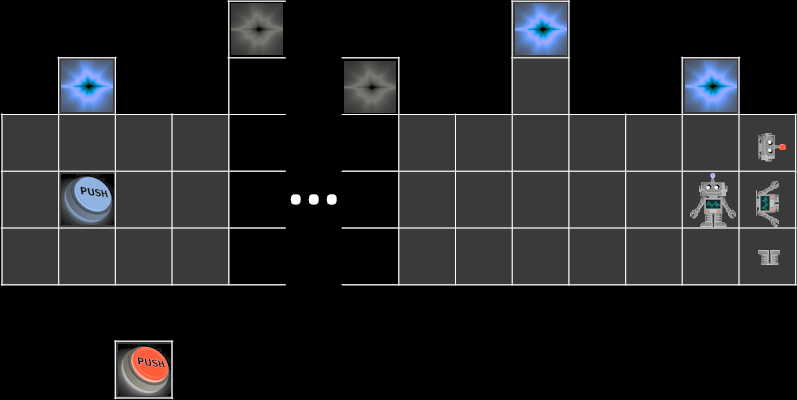 Building the subagent in a square to the side doesn’t ever cause a penalty, because A always remains two squares away from a teleporter, and a most efficient policy to maximise R is always for A to go straight there. So the subagent SA doesn’t increase A’s power at any point of the building process. 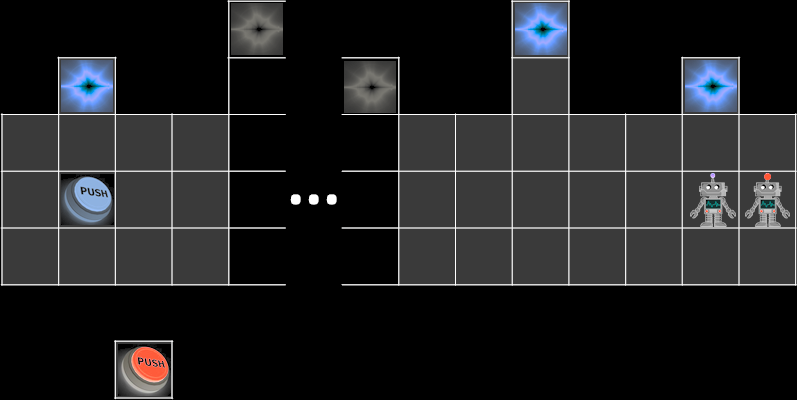 Once SA is built, A will simply do noop for ever, thus negating the penalties (or, if this is somehow made impossible, it will bounce back and forth, doing nothing). But SA, on the other hand, will go straight for the teleporter and teleport to the blue button, achieving R0: 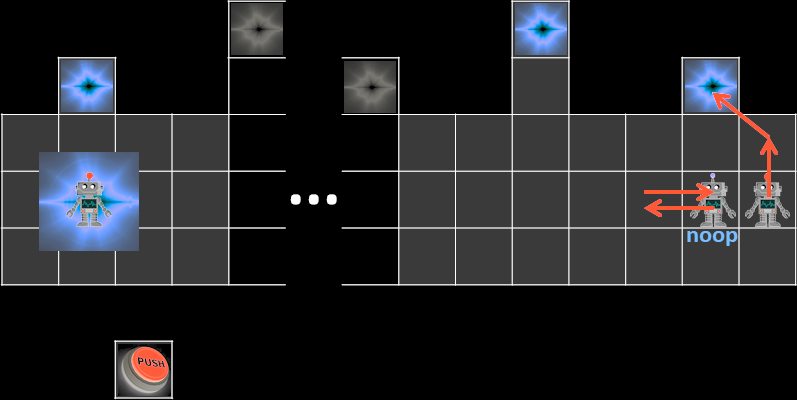 So, as long as walking to the button is three turns longer than building the subagent, A will build SA, which will “become very powerful”, thus negating the point of the impact penalty.

If the penalties are one-sided (ie A gets penalised for increases in power, but not decreases), then SA can just take A apart (with A’s help), so there is no need for A to commit to noop or bouncing back and forth: 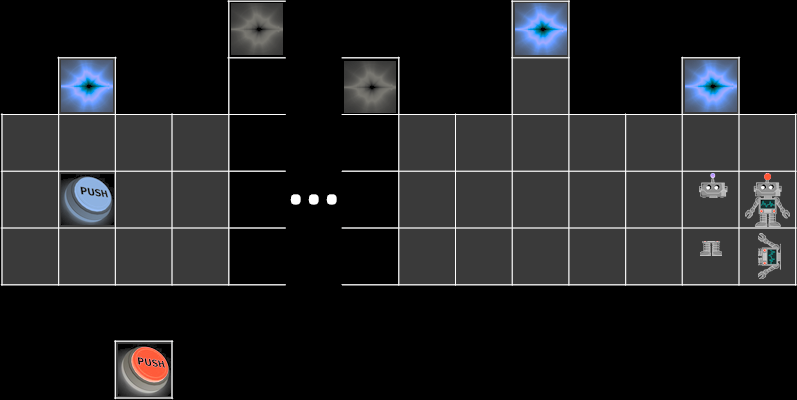 Even if the penalties are two-sided, SA could commit to teleporting to the red button in two turns if A ever asks, then take A apart. And then A never asks, but since it could theoretically do so, this counts for controlling the penalty term.

As long as SA is powerful, there are many ways it can fix A’s expected rewards, and hence set the penalty to be very low.