Last year I reviewed Albion’s Seed, historian David Fischer’s work on the four great English migrations to America (and JayMan continues the story in his series on American Nations). These early migrations help explain modern regional patterns like why Massachusetts is so liberal or why Appalachia seems so backwards. As always, there’s the lingering question of how much of these patterns are cultural versus genetic versus gene-cultural interaction.

The team looked at 770,000 genomes analyzed by the AncestryDNA company and used a technique called identity-by-descent to find recent common ancestors. Then they used some other techniques to divide them into natural clusters. This is what they got: 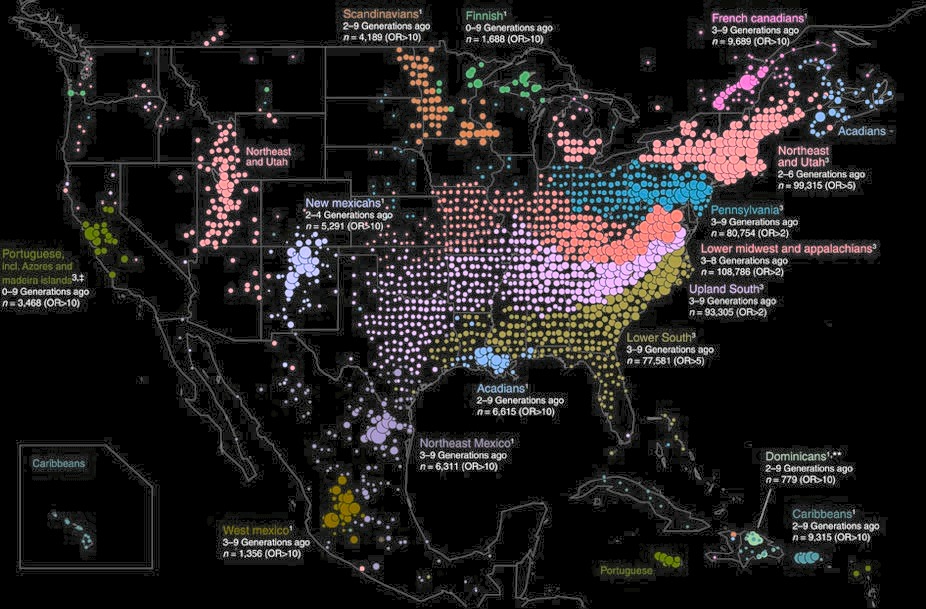 This is kind of beautiful. While not exactly matching Albion’s Seed, it at least clearly shows its New Englander and Pennsylvania Quaker migrations (more realistically the Germans who came along with the Quakers), with less distinct signals for Borderers and Virginians. It shows how they spread directly west from their place of origin in almost exactly the way American Nations predicted. It even confirms my own conjecture that the belt of Democrat voters along southern Michigan corresponds to an area of New Englander settlement there (see part III here, or search “linear distribution of blue”). And it confirms Razib Khan’s observation that the Mormons are just displaced New Englanders and that their various unusual demographic features make sense in that context.

My biggest confusion is in the Southern/​Appalachian region. I think Fischer would have predicted two distinct strains: a Tidewater/​Virginian population along the coasts, and a Borderer/​Appalachian population centered in West Virginia and Kentucky. Instead there are three populations, all of which start along the Atlantic Coast and continue inland in about the same way. Assuming red/​”Appalachian” is the Borderers, I don’t know if Fischer has a good explanation for the purple/​”upland south” vs. gold/​”lower south” distinction. Nor I do get understand why, if one of those two represent the Tidewater Virginians, they don’t seem to be in the Tidewater Virginia region (which here is inhabited mostly by Borderers). Maybe this has something to do with the Civil War, or with the growth of the DC suburbs?

(And I guess we still haven’t ruled out the maximally boring explanation that interbreeding is entirely geographic and north-south is a bigger distinction than east-west so we’re just seeing the country divided into five equal-sized latitudinal bands.)

Not exactly a confusion, but more a disappointment: this map doesn’t provide the confirmation I’d hoped for that Californians, Seattleites, and other “Left Coasters” are displaced New Englanders – which would complete the circle of “Liberal Democrats = Puritan/​Quaker population subgroup”. It’s also disappointing how little data they have for the Mountain West in general; I don’t know if that’s because there weren’t enough people there to show up, or because they’re a mix of every genetic lineage and don’t fit into any of the clusters nicely.

Still, I find this a really elegant example of hard science confirming historical speculation. Thanks to everyone who brought it to my attention.

[EDIT: Jayman goes much more into depth on this]